A Florida zookeeper was fired Wednesday morning after tweeting about his desire to push conservative personality Kaitlin Bennett into a pit of “hungry alligators” as she toured his place of employment.

Second amendment activist Kaitlin Bennett, better known as the “Kent State Gun Girl,” came to public attention after posing with an AR-10 in her graduation photos as a means of advocating for students’ right to carry firearms on campus.

Since then, Bennett has received repeated public and media attention for activism that many deem “controversial” and a brand of unabashed Second Amendment absolutism that has sparked conversation on both sides of the aisle.

Now that I graduated from @KentState, I can finally arm myself on campus. I should have been able to do so as a student- especially since 4 unarmed students were shot and killed by the government on this campus. #CampusCarryNow pic.twitter.com/a91fQH44cq

Two days after Bennett’s Sunday visit to St. Augustine, Florida, Alligator Farm Zoological Park with her fiancé and family, zoo employee Ethan Patterson tweeted about seeing her at his place of work, and his subsequent desire to send her plunging into the gator pit.

“I just want y’all to know that Kent state gun girl came to my place of work and it took everything in me to not push her over the railing into the mouths of 250 hungry alligators,” the employee wrote in a since-deleted tweet. (RELATED: Outrage Erupts Over Video Of Virtual Feminist Being Fed To Virtual Alligator)

Bennet says she is not sure whether or not she interacted with Patterson directly, but does recall an interaction with an employee who stared at her and then into the pit after saying “excuse me” to her. 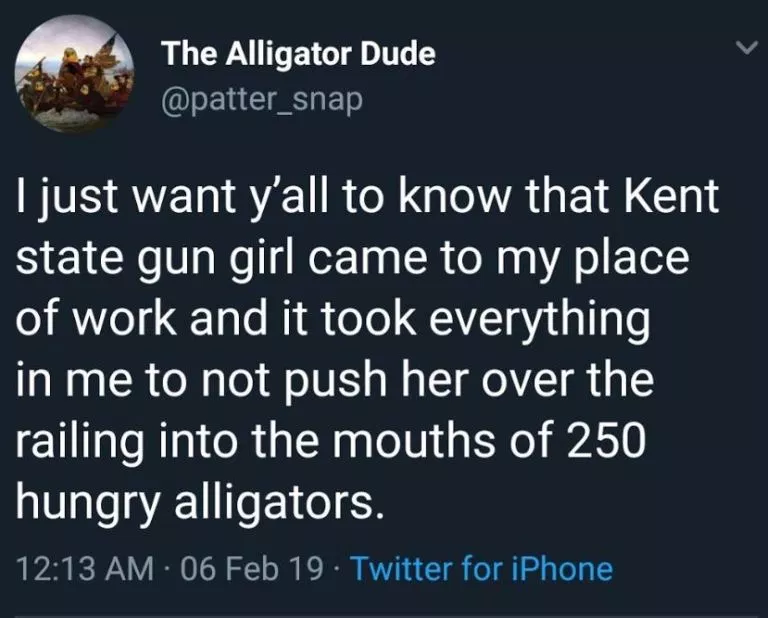 In a statement to The Daily Caller, zoo director John Brueggen confirmed that Patterson was terminated Wednesday morning “for an inappropriate Tweet, in which he made threatening remarks regarding a recent visitor.

“Although we feel certain there was never any real threat of physical harm, the offended party took the matter very seriously, as do we,” said Brueggen. “We are committed to treating our guest with the utmost respect, and found this incident to be inexcusable.”

“We recognize that people have the right to communicate on social media, however, reckless behavior can clearly have unfortunate consequences, and any message that disparages our zoo guests or our business cannot be tolerated,” he concluded.

The Caller also reached out to Bennett, who said, “I didn’t think my life was in danger or anything, but it’s not out of the realm of possibilities for someone to do something like that to conservatives. We have seen time and time again what leftists are willing to do to us. They assault us, steal our property, doxx us and pour urine on us in public.”

Bennett says she is thankful that zoo management handled the situation the way they did.  She and her family returned to the facility today after being invited back for a free tour by the Alligator Farm.