House Democrats on Thursday held a hearing criticizing the Trump administration’s “zero-tolerance policy” on illegal immigration and its impact on child separations.

“Today, we take a look at the Trump administration’s ill-conceived, and frankly shameful, family separation policy that led to thousands of children being separated at the border,” said Democratic Colorado Rep. Diana DeGette, the new chairwoman of the Subcommittee on Oversight and Investigations of the Committee on Energy and Commerce, in her opening remarks.

DeGette led the subcommittee in its hearing titled “Examining the Failures of the Trump Administration’s Inhumane Family Separation Policy.” The hearing largely focused on the Health and Human Services’ (HHS) care of unaccompanied alien children who are caught at the border, and their procedures for children separated from their parents upon apprehension — a policy DeGette framed as cruel and incompetent.

“You’re going to hear some harsh comments today,” DeGette said to the witnesses present to testify. “The administration’s policy of separating children from their parents at the border — and the chaos it unleashed — has left scars that will never heal.”

Despite child separation taking place long before President Donald Trump entered office, the issue has received renewed attention following Department of Justice’s announcement in April 2018 that it would be instituting a “zero-tolerance” policy for illegal immigration at the border.

The hardline policy called for the prosecution of all individuals who attempted to enter the country illegally. The consequence was a large number of parents being referred for prosecution while their children were put into the custody of a sponsor, a shelter or given to a relative or foster home in the U.S.

Trump issued an executive order in June 2018 that ended the policy of family separation, but the administration has taken criticism from Democrats for keeping the zero-tolerance policy in place.

Congressional testimony on Thursday, at numerous times throughout the hearing, became heated. 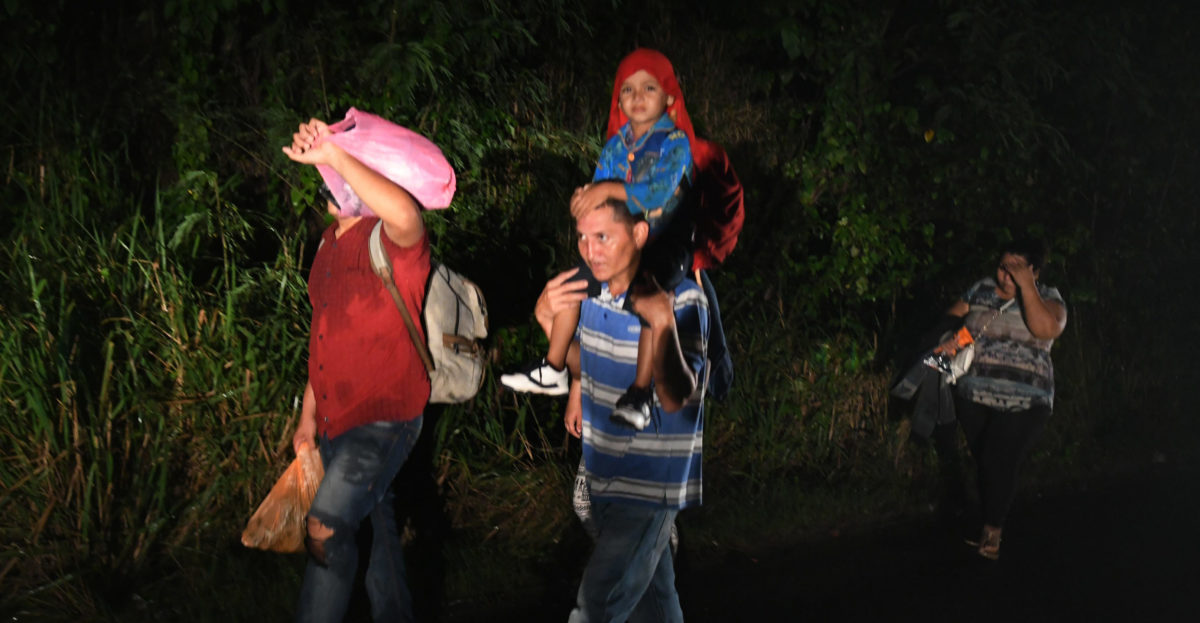 A man carries a child on his shoulders as Honduran migrants, part of the second caravan to the United States, leave San Pedro Sula, 180 km north of Tegucigalpa, on January 14, 2019. ORLANDO SIERRA/AFP/Getty Images

“I just feel like what’s been happening is more than irresponsible and sloppy, but I really think what we’re talking about is state-sponsored child abuse, and I would go as far as to say kidnapping of children,” said Jan Schakowsky, a Democratic congresswoman from Illinois.

However, Republican members of the subcommittee and an HHS representative pushed back on these characterizations, pointing out the care the U.S. government provides to children found on the border. Not only do children receive immediate medical attention when apprehended, but immigration enforcement officials also prove instrumental in busting sexual slave traders across the U.S.-Mexico border.

“Every child who enters ORR [Office of Refugee Resettlement] care, part of their first hours in ORR care will include a comprehensive psychosocial assessment and risk assessment to determine their needs,” said Commander Jonathan White of Public Health Service Commissioned Corps. “They also go through a process we call IME, which is initial medical evaluation, which is a complete medical work-up.”

“This is all part of every child’s first day,” White continued.

Republican South Carolina Rep. Jeff Duncan warned about the criminals involved in illegal immigration on the southern border. Bringing up the 169 individuals arrested around Super Bowl weekend who were involved in the sex slave trade, Duncan spoke on the importance of verifying that adults who accompany children are actually their parents, helping make sure kids who leave government care remain safe. (RELATED: Trump On Immigration: No Issue Better Illustrates The Divide Between Political Class And Working Americans)

TOPSHOT – Boys play around, climbing the border division between Mexico and the US in Ciudad Juarez, Mexico on January 26, 2017. HERIKA MARTINEZ/AFP/Getty Images

Democrats in Congress plan to continue making the subject of child separation an issue, with the House Judiciary Committee planning to question a number of officials from Customs and Border Protection, the Justice Department, and Immigration and Customs Enforcement later in February. Additionally, most Senate Democrats have signed onto legislation that calls for the Department of Homeland Security to end child separation on the border.

“I know some of you guys have opened your homes up to kids, but how many have you actually opened your homes to kids? Right now I have six living with me — three are biological,” said Republican Oklahoma Rep. Markwayne Mullin, who, along with his wife, adopted separated twins in order to keep them together, as well as another child.

“So you want to talk about opening your family, and talk about the kids? Then get off your butt and do it yourself,” Mullin added.