Democratic New York Rep. Alexandria Ocasio-Cortez kicked off Thursday unveiling her highly-anticipated “Green New Deal” resolution to cheers from Democrats and environmentalists, but by the day’s end, her staff was forced to take a gaffe-riddled summary of the bill offline.

Ocasio-Cortez gave NPR the scoop. Her office provided NPR the Green New Deal resolution and its accompanying FAQ document that laid out its goals, namely to “[m]ove America to 100% clean and renewable energy” within 10 years.

What immediately became clear, however, was that the legislative language didn’t match with Ocasio-Cortez’s FAQ, especially when it came to nuclear power, welfare programs and “farting cows.”

“Frankly, it does a disservice to the debate,” Jeremy Harrell, policy director at ClearPath, a conservative group that promotes low-emissions energy, told The Daily Caller News Foundation. (RELATED: What’s Really Motivating The ‘Green New Deal’? Ocasio-Cortez Straight Up Told Us)

The Green New Deal resolution, which has more than sixty cosponsors in the House, does not have language ruling out nuclear or banning fossil fuels, but its accompanying FAQ actually did.

A Green New Deal is a massive investment in renewable energy production and would not include creating new nuclear plants. It’s unclear if we will be able to decommission every nuclear plant within 10 years, but the plan is to transition off of nuclear and all fossil fuels as soon as possible.

In fact, NPR reported the “ultimate goal is to stop using fossil fuels entirely, Ocasio-Cortez’s office told NPR, as well as to transition away from nuclear energy.” 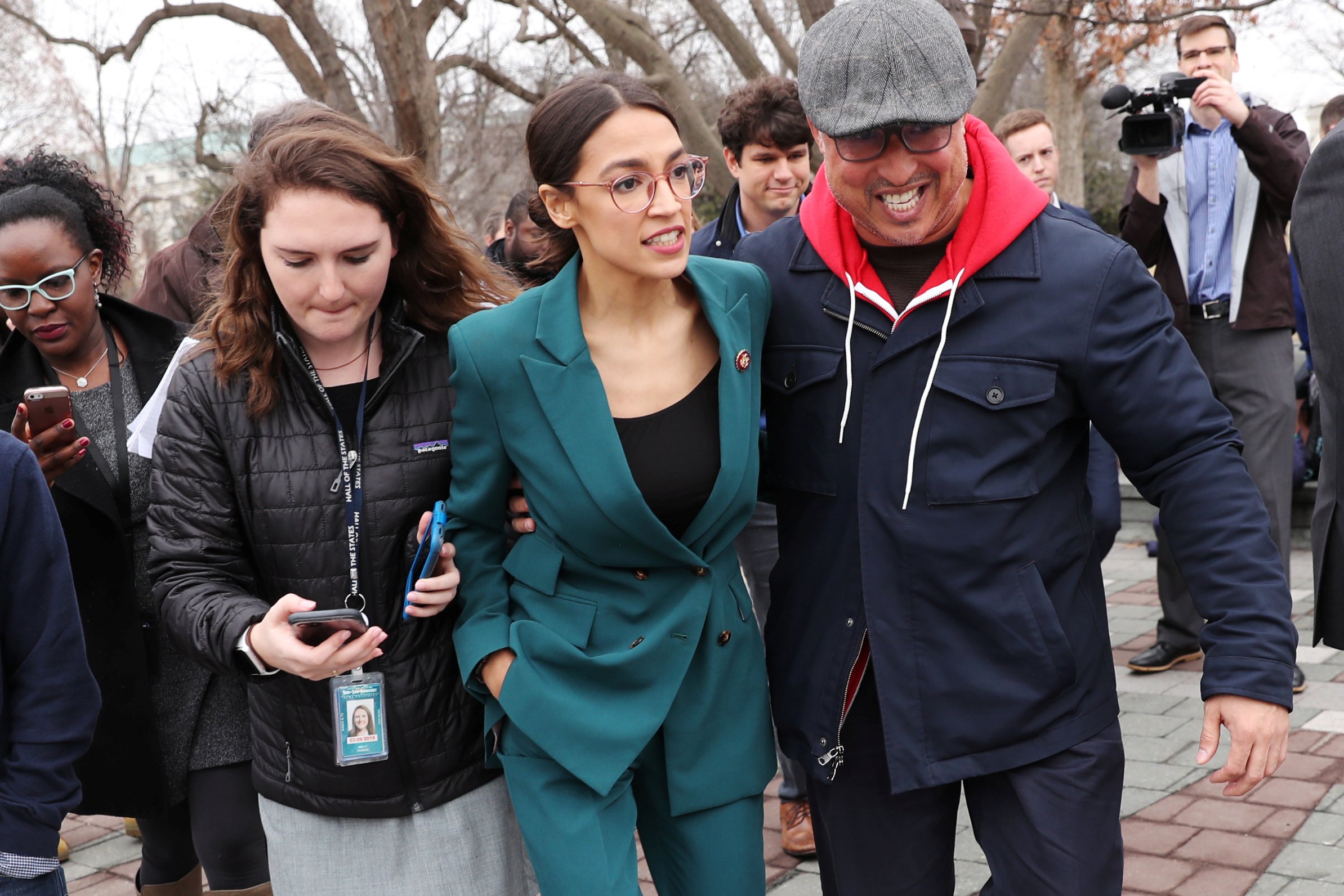 U.S. Representative Alexandria Ocasio-Cortez (D-NY) moves through a group of reporters after a news conference for the proposed “Green New Deal” to achieve net-zero greenhouse gas emissions in 10 years, at the U.S. Capitol in Washington, U.S. February 7, 2019. REUTERS/Jonathan Ernst.

“She’s making false promises that aren’t even in the realm of the doable,” Harrell said. “She’s using this to push a liberal agenda.”

Harrell wasn’t the only one to notice the discrepancy. Mike Shellenberger, founder of the pro-nuclear group Environmental Progress, called for Ocasio-Cortez do clear up the confusion.

If @AOC isn’t calling for death of nuclear then she needs to issue *written statement* https://t.co/NGvVEU3cDJ

Shellenberger pointed to the fact Ocasio-Cortez herself said at a Capitol Hill rally for the Green New Deal was about “transitioning to 100% renewable energy,” despite the legislative text.

Energy expert Christopher Clack, who co-authored a comprehensive study on the feasibility of a 100 percent renewable grid, told TheDCNF that while he thought the legislative text was “ambitious and far-reaching,” the FAQ complicated things.

“If they are not wanting newer technologies, and wanting only wind, solar and hydro, as the FAQs represent, that would be more problematic,” Clack said, “however, that is not how the bill is written.”

Clack’s study estimated that completely decarbonizing the grid, including the use of nuclear power and carbon capture, would cost somewhere between $20 trillion and $40 trillion by 2050.

Ocasio-Cortez’s staff took out the anti-nuclear language from the FAQ posted on her congressional website. However, that FAQ page was taken down Thursday afternoon.

But those weren’t the only changes made to the FAQ before it was taken down.

The Green New Deal’s FAQ also explained how the resolution used the term “net-zero emissions, rather than zero emissions” was because “we aren’t sure that we’ll be able to fully get rid of farting cows and airplanes that fast.”

The FAQ also called for a “[b]uild out highspeed rail at a scale where air travel stops becoming necessary.” Ocasio-Cortez’s staff eventually deleted “farting” from the FAQ, but not before reporters found it.

Democrats were also hard-pressed to explain how Americans would phase out the internal combustion engine and what a world without air travel would look like. Also included in Ocasio-Cortez’s FAQ was the promise of “[e]conomic security to all who are unable or unwilling to work,” which was also missing from the legislation.

House Speaker Nancy Pelosi dismissed the Green New Deal as a “suggestion,” and named more members to the House climate change committee. Ocasio-Cortez was not named to the committee. 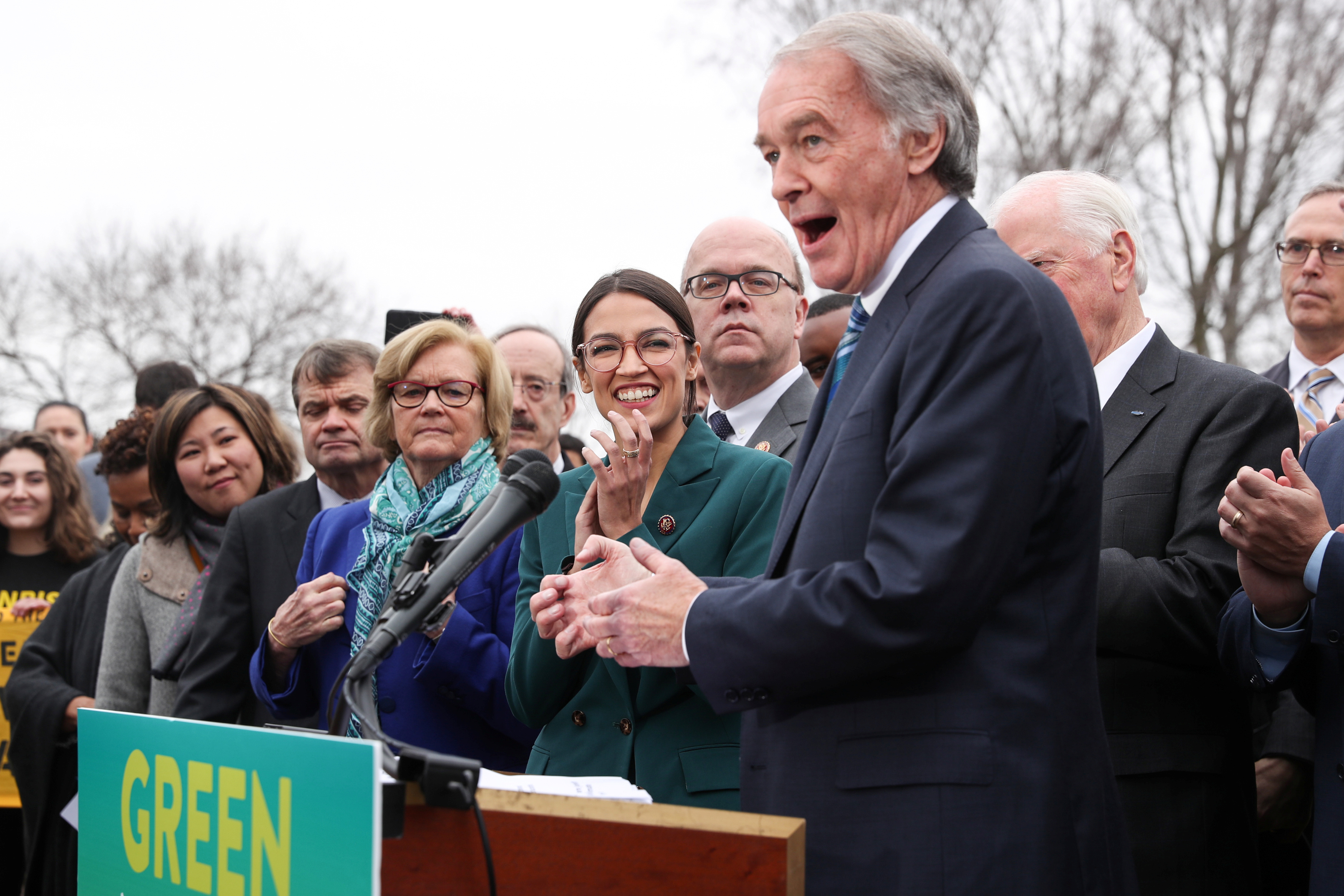 Democratic Massachusetts Senator Ed Markey introduced a companion bill in the Senate Thursday that was cosponsored by several Democratic 2020 hopefuls.

The Green New Deal’s FAQ at least twice mentioned planting trees as a way to sequester carbon dioxide emissions and fight global warming. In fact, the FAQ says a Green New Deal would mean we “plant lots of trees” to reduce emissions.

“We believe the right way to capture carbon is to plant trees and restore our natural ecosystems. CCUS technology to date has not proven effective,” reads the FAQ, referring to carbon capture technology.

“Planting trees is not going to eliminate or reduce emissions from a variety of point sources. In the end, you need carbon capture and nuclear to meet emissions goals,” Harrell said.

Ocasio-Cortez’s office did not respond to TheDCNF’s request for comment,