They’ve got a lot to discuss.

Which they had plenty of time to do as Rosie took Stormy as her date to opening night of “The Music Man” at the Kennedy Center Thursday night. Rosie plays the part of Mrs. Paroo.

Late Thursday night, Stormy solidified their friendship with a picture. The photo was odd: Rosie looked sort of disgusted with resting bitch face. Stormy played the part of seductress.

Stormy posted a sort of cheerier photograph of her night with Rosie on Instagram. Rosie still doesn’t look totally thrilled, but maybe that is just her face and as smiley as it gets. 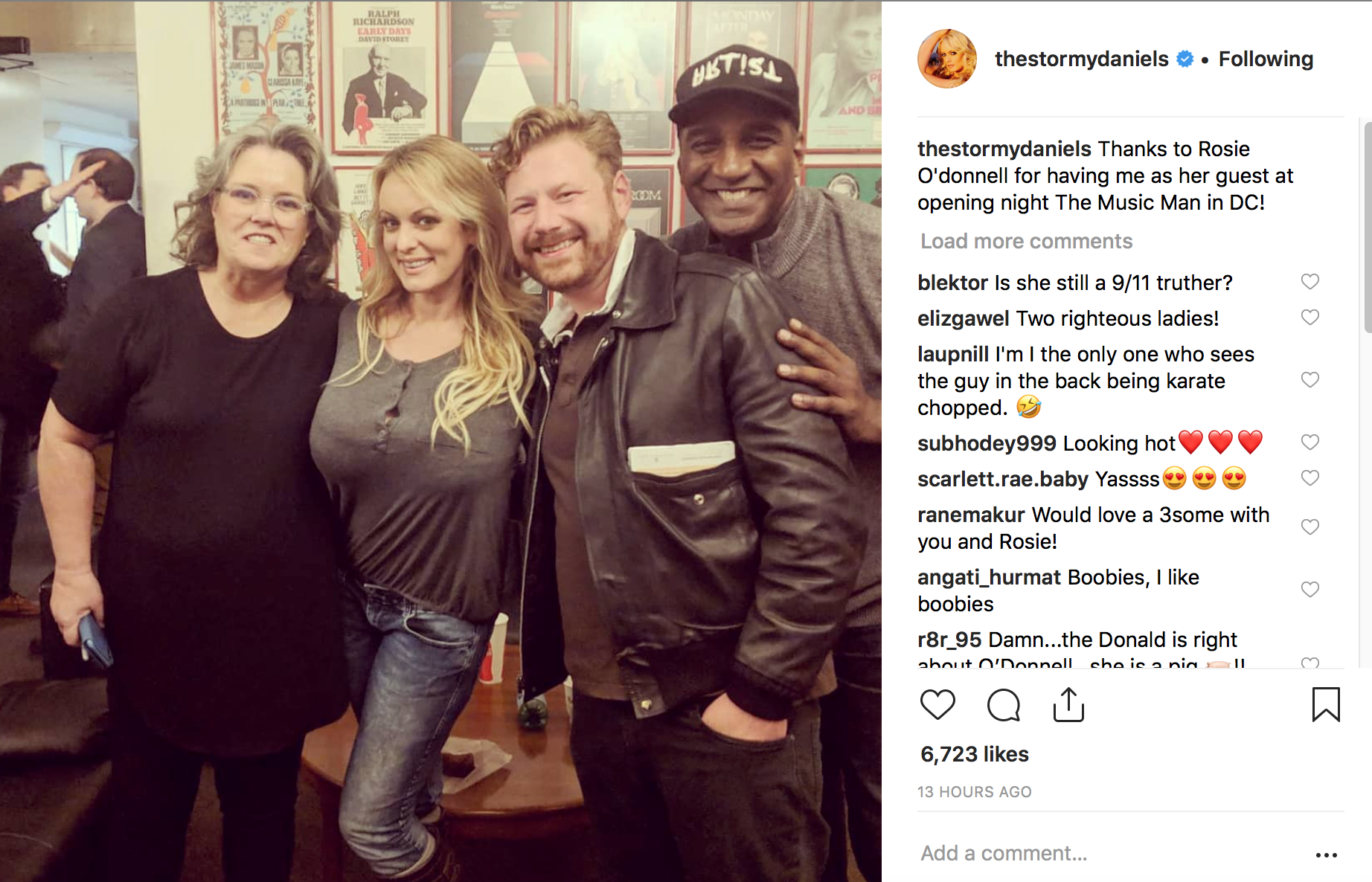 Stormy has been locked in legal issues with Trump since 2016 when she emerged and claimed she had sex with Trump in 2006. She tried to sue Trump for defamation, but a judge threw the case out in October. Her attorney Michael Avenatti has repeatedly claimed that the pair had unprotected sex.

He officially called Rosie “pig face” in 2007 at a real estate event.

“I hate that big pig face,” he said to a laughing audience.

Rosie’s Feud with Trump, ironically, technically began in 2006.  Rosie told him to “sit and spin” over his decision not to fire Miss USA Tara Connor because of drinking, sex and more. Trump decided to give her a second chance. Trump fought back and called Rosie one of his favorite insults: “a real loser.” In 2011, he called her a “true loser.” She called him “an ass.” By 2012, Trump was calling Rosie a “total loser.”

When Rosie returned to ABC’s “The View” in 2014, he called her “crude, rude, obnoxious and dumb.” In 2015, when Rosie left the show because of the stress of a previous heart attack, Trump laid his insults on thick, saying she was a “total trainwreck” and “a loser.”

At Trump’s first GOP presidential debate in Cleveland in the summer of 2015, then-Fox News host Megyn Kelly asked Trump why he refers to women in such derogatory ways. “You’ve called women you don’t like fat pigs, dogs, slobs and disgusting animals,” Kelly began.

With a finger raised, he interrupted her and replied, “Only Rosie O’Donnell.”

Gasps and laughter could be heard erupting from the packed press room behind the stage.

Kelly shot back, “For the record, it was well beyond Rosie O’Donnell.”

“I’m sure it was,” Trump retorted.

“Your Twitter account has several disparaging comments about women’s looks,” she said. “You once told a contestant on ‘Celebrity Apprentice’ it would be a pretty picture to see her on her knees. Does that sound to you like the temperament of a man we should elect as president?”

That’s when Trump went after Kelly.

“What I say is what I say, and honestly, Megyn, if you don’t like it, I’m sorry,” he said. “I’ve been very nice to you, although I could probably not be based on the way you treated me. But I wouldn’t do that.”

1
Whoopi Goldberg To Looters: 'You Need To Stop Because You've Destroyed Too Many People's Dreams'
US
2
A California Man Has Been Accused Of Killing His Grandma, Trying To Eat Her
US
3
DC Protesters Accosted, Chased Out An NBC Crew. The Network Is Refusing To Cover It. We Have It On Video
Media
4
Kansas City Police Say Bricks Staged Near Protests Were 'To Be Used During A Riot'
US
5
Attorneys Accused Of Firebombing NYPD Vehicle Donated To Bernie Sanders, FEC Records Show
Politics