Rival groups associated with the so-called Yellow Vest movement were involved in what appears to be a street brawl Saturday during the 13th week of protests against French President Emmanuel Macron.

“A Right-wing group of Yellow Vests attacked a Left-wing one, and the result was carnage,” one protester who witnessed the confrontation told reporters, according to the Daily Mail Sunday. “They were using any weapons they could lay their hands on, and in the end the police had to break them up.”

More than 50,000 people associated with the anti-Macron movement marched across France, according to police reports. The number of protesters has ebbed considerably since the first Yellow Vest demonstrations in mid-November 2018.

More than 5,000 of Saturday’s protesters were in Paris, where there were 38 arrests following widespread rioting that saw several critical governmental and private infrastructure targeted. (RELATED: BATONS, ROCKS AND FIREWORKS: RIOTERS CONVERGE ON PARIS OVER GAS TAX HIKES)

“We’re not children, we’re adults,” Hugues Salone, one of the throngs of activists, said while marching Saturday, Reuters reported. “We really want to assert our choices, and not the choices of the politicians who do not live up to them.” Some witnesses claimed violence ticked up during the melee.

An injured protester is given help during a demonstration by the “yellow vests” movement in Paris, France February 9, 2019. REUTERS/Gonzalo Fuentes

Riot policemen react to tear gas during a demonstration by the “yellow vests” movement in Paris, France February 9, 2019. REUTERS/Gonzalo Fuentes 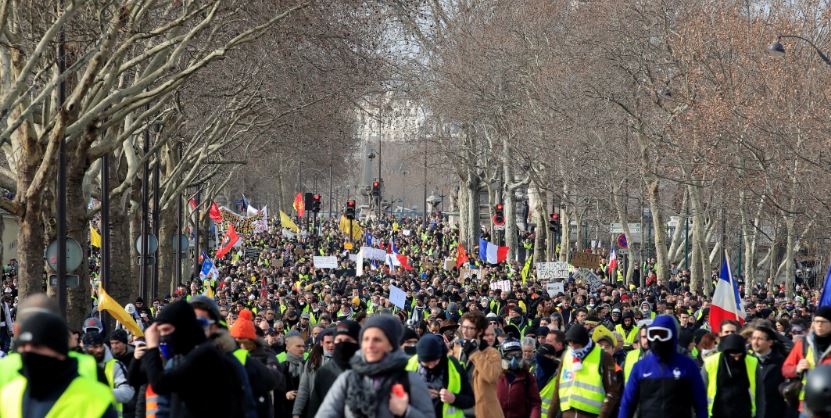 One young man who was trying to take pictures of the demonstration was injured on his left hand after riot officers fired tear gas into the crowd. Witnesses said he lost four fingers after trying to knock away a concussion grenade.

Demonstrators shouted “Macron resign!” suggesting that the French president’s troubles were not over, despite Macron’s decision to ding a gas tax in December that kickstarted the protests.  He had previously his ground, seemingly unwilling to give into protesters’ demands.

Lawmakers from Macron’s party have received threats in recent months. Activists targeted Britanny home of Richard Ferrand, the president of the National Assembly and a close Macron ally. “Nothing justifies intimidations and violence toward an elected official of the Republic,” the French president wrote on Twitter following the protests.