While looking through the Rock Island Armory catalog, I saw what I believed to be an Italian made CZ-75 Clone, manufactured by Tanfoglio and sold in the U.S. as the EAA Witness P. Here it was with a different name offered by Armscor, the noted Philippine manufacturer of the Rock Island Armory line of handguns. Since I was already working on a project involving Rock Island revolvers, I asked their rep if he could have them send me a MAPP MS for evaluation. When it arrived, I found myself holding an old friend and thinking, “Thank you, Armscor, for keeping this model alive.” Let me explain my enthusiasm.

When teaching the Texas Concealed Handgun License Course to new shooters, I often introduced them to the EAA Witness P as a suitable concealed carry pistol at an affordable price. I had a couple of them available as loaners, allowing the students who didn’t own a gun to shoot them during the shooting proficiency stage of qualification. There were other, more expensive models in the bag as well, but invariably those who shot one of the EAAs came back after class and bought one since I owned a gun store at the time.

It’s said by those who have traveled abroad, the CZ-75 is in Europe what the 1911 is in the U.S. Naturally, there are a lot of clone manufacturers for the CZ-75, as there are for the 1911. The fact Armscor is producing this particular polymer version means a proven design lives on and at a very affordable price. Most CZ clone manufacturers alter the design slightly, especially for the polymer models, but I always felt the EAA Witness version was as good as they come. When I first held the MAPP in my hands, my suspicion was confirmed. The only discernible difference between it and the Tanfoglio pistol was the word “Philippines” on the right side of the frame and the Rock Island logo on the slide. I did a little investigation and learned the parts for the MAPP are manufactured in Italy by Tanfoglio and shipped to the Philippines for final assembly. Mystery solved. 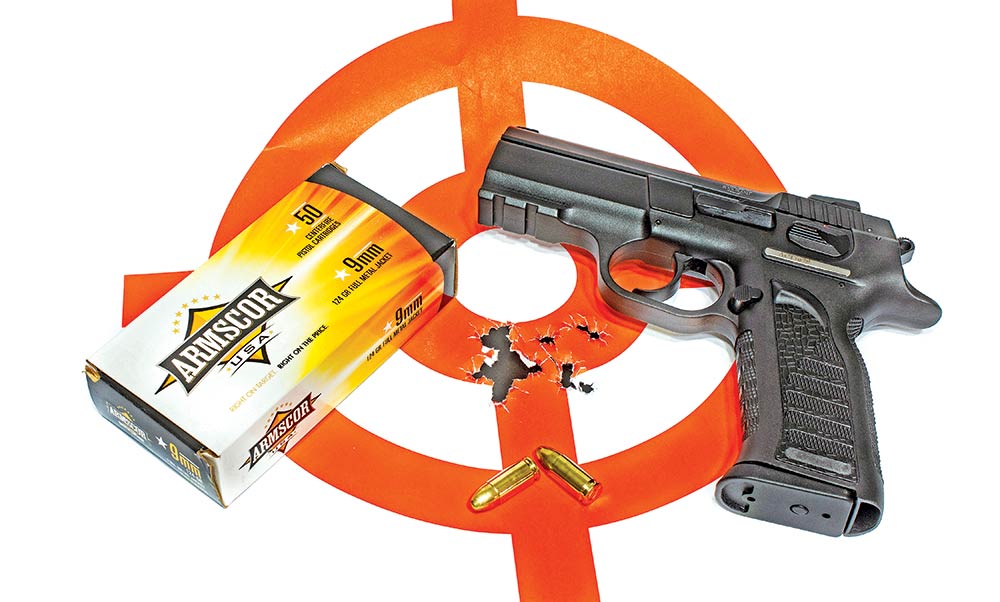 This first-shot group from about 15 feet was done with no break-in period just to see if things worked. It turned out they worked great as the test trundled along.

When you hold the MAPP you understand immediately why the CZ-75 and its clones have never needed interchangeable backstraps. Like the 1911, it’s a model fitting your hand naturally, no matter the size of your paw. The gun weighs 28 oz. and a loaded 16-round magazine adds about 8 oz. Barrel length is 3.66″ with a 1-in-16 twist. There’s a Picatinny rail if you want to hang a light/laser on it for home defense. Trigger pull on the evaluation model was 6.2 lbs. single-action. The double-action trigger pull is 14 lbs.

You can carry this gun cocked and locked just like a 1911, so the DA trigger pull would not be a factor — but it’s there if you like it. The LPA sights are snag-free, with three well-defined white dots. These sights are dovetailed and could easily be exchanged for fully adjustable sights, night sights or sights of another color. The gun came with two 16-round magazines.

The stainless steel slide on the MAPP fits inside the polymer frame. This is in keeping with the original CZ design. The entire top side of the slide is rounded, except for the last two inches where the gripping serrations are located. The slide racks easily, even with my old arthritic hands and shoulders, and the slide lock lever is easily pushed up with your thumb when the slide is fully to the rear. The other controls on the left side include the safety — which firmly snaps on and off — giving me complete confidence in cocked-and-locked carry. The magazine release is nifty too as it can be reversed for left-handed shooters. 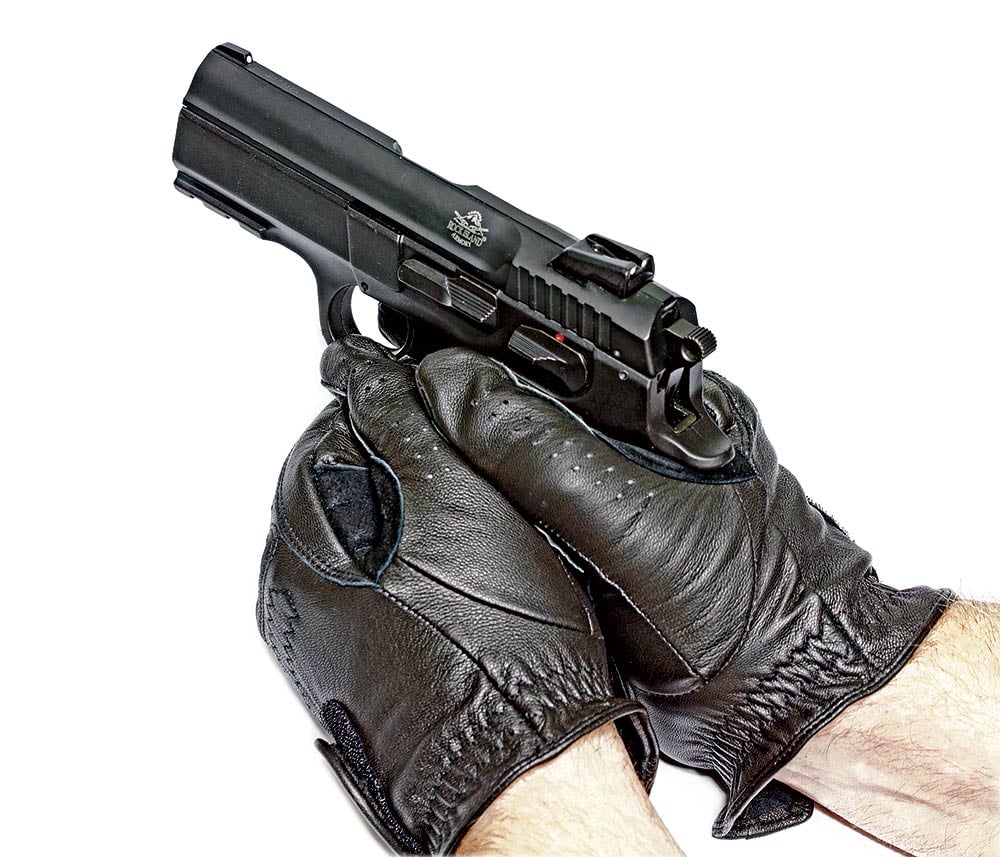 The ergonomics of the MAPP translates into no need for grip inserts. Like the sort of “parent” CZ-75 design, the grip of the MAPP just seems to fit a wide range of hand sizes. Note the bold sights.

Takedown for cleaning is pure CZ. Align the take-down “dots,” push out the slide release, take out the recoil spring/barrel and you’re there. Just read the clear instructions. The gun is now ready for inspection and cleaning. Reassembly is straightforward, essentially reversing the steps.

While the gun is apart it’s interesting to take note of how the internal trigger block safety works. It’s just the opposite of how many of them work. The safety button inside of the slide is held up to block the firing pin from moving forward until the trigger is in its full rearward position.

Inside the case was an orange warranty information card with a note saying due to the fit and tightness of the firearm RIA recommends a break-in period of 500 rounds. There’s also a warning in the manual against using +P ammo.

I saw no evidence at the range of this gun needing a 500-round break-in period. Without even cleaning it, I started shooting it with the Armscor FMJ 124-gr. ammunition sent to me for the MAPP evaluation. The first magazine, fired free-hand at a target 15 feet away, was tightly grouped, though slightly below point of aim. I shared the shooting chores with several others, including new friends we met at the range. As we continued shooting throughout the day, we all continued to get good results, but most agreed the pistol shot slightly low. This is not a hard problem to correct, and it did nothing to dampen our enthusiasm for the gun. 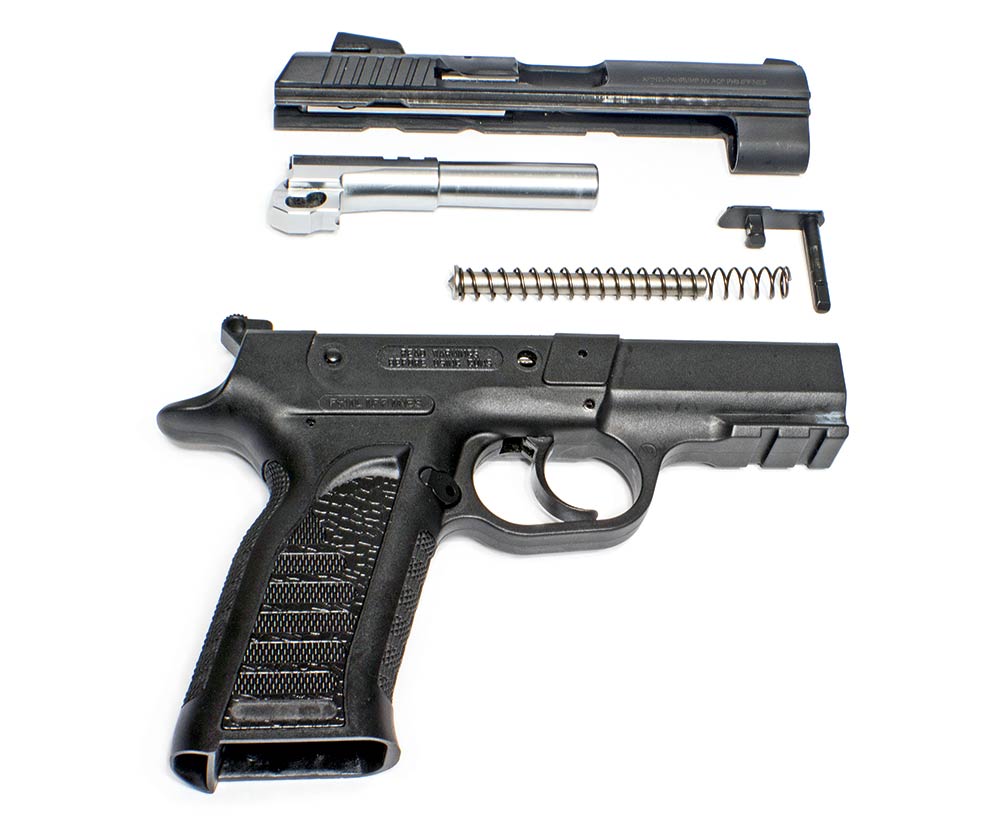 I brought several brands of defensive ammo along, including Novx 65-gr. ARX, Browning 147-gr. BXP, Hornady 115-gr. Critical Defense and Fiocchi 124-gr. JHP. After shooting at least one entire magazine with a particular brand, we started mixing and matching. All in all, we shot over 500 rounds that afternoon and had absolutely no malfunctions. Five-hundred round break-in or not, we now had a broken-in gun to put to the test at 25 yards. This would require another range trip.

Back home, I cleaned the gun for the first time and a couple days later headed to my favorite outdoor range for some 25-yard shooting. That day, I fired 5-shot groups with Armscor 124-gr. FMJ, Browning 147-gr. BXP, Federal Hydrashok 115-gr. and Inceptor ARX 65-gr. The Armscor gave me one group of three inside 3″, with the other two 5″ and 7″ away. The ARX all grouped within 5″ and all rounds fired landed within a 9″ circle regardless of the brand. 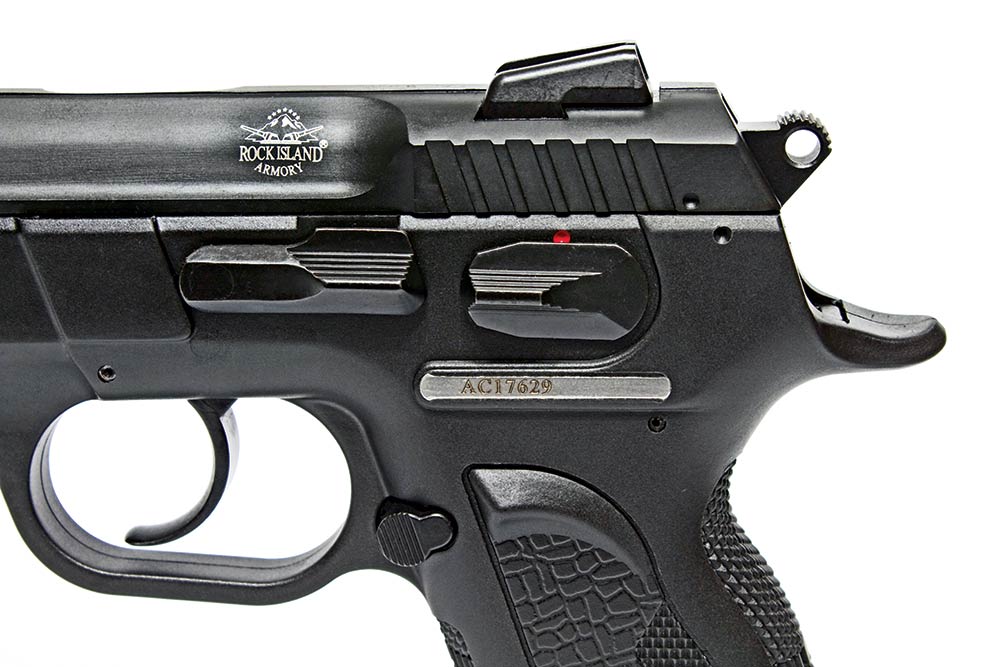 The slide lock, safety and magazine release fall right under your fingers and are all easy to operate.

Confident in the accuracy and reliability of the handgun, I loaded it with ARX defensive ammo and carried it cocked and locked for a week in a Crossbreed SuperTuck IWB holster. In the privacy of my home and with the gun unloaded, I practiced drawing and aiming at various targets, something I make a habit of doing with any gun I carry for defense. The MAPP MS draws easily and aims naturally. I’ve always loved that about this design. After the first week of becoming reacquainted with the gun, I rummaged around and found an Alien Gear holster set up for a Springfield XD fitting the MAPP quite well, so for another week I carried it in the Alien Gear holster.

What are my conclusions? I’m glad to see Rock Island has kept this model alive and even more pleased to see they have a model chambered for the TCM9R round. The MSRP on the MAPP MS 9mm is $492, with street prices around $400. Checking around, I found several retailers who, just like I had done, had overlooked this gun. But we all remembered the EAA Witness P. Here it is again, and from a company realistic with their pricing and relentless about quality and standing behind their products. I suspect I’ll be keeping this one.