A Day In The Life Of A Journalist

Ben Dreyfuss, Mother Jones: “Last night I was sitting in a bar alone at 1am andI starting chatting with this couple and after a while I asked how they met. ‘Dance-off at SantaCon,’ the guy excitedly answered. And it was a real ‘Ben, you need to change your life’ moment.”

Ben Dreyfuss, Mother Jones: “When he went to the bathroom to do cocaine she asked if I was gay and when I said no she put her number in my phone. I don’t love their chances.”

“Whatever if we’re really doing this let’s get Lincoln Chaffee back in this bitch.” — Ashley Feinberg, HuffPost.

“Hey @thehill: do you do stories like this when two male talk show hosts have a disagreement? Because as much as I respect your normally terrific reporting this is not up to your standards. Does nothing — ZERO — to enlighten the public with info. News flash: it’s a talk show.” — Julie K. Brown, investigative reporter, The Miami Herald. “Totally sexist story. There is nothing newsworthy about two talk show hosts disagreeing on morning TV.”

Newsflash: Media reporters cover TV cable news fights all the time no matter the gender. Maybe if the investigative reporter did a scant about of investigating on this matter, she’d know this. On ABC’s “The View” Monday, Behar accused McCain of having a “hissy fit” after McCain want to detail some talking points. Splinter, Us Weekly and People covered the row as did The Hill, E! News and The Daily Caller.

Actually, coverage of men fighting with men on air has been all the rage for years. Even Bro-mancers Don Lemon and Chris Cuomo sometimes get into it on CNN.

The story in question: “Harry Reid Rebuked Amy Klobuchar For Mistreatment Of Staff” by Molly Redden and Amanda Terkel. Here.

Tom Watson, lefty journalist: “The allegations should be examined. But the journalism was crap. Truly bad. Rushed, timed for max political damage (not a reporter’s job), skirting ethical boundaries on purely anonymous charges.”

Joseph Finneran, event and broadcast producer: “I’ve been hesitating to comment on the journalism because I’m a big fan of @aterkel. But this does seem thinly sourced and the timing – including the obvious milking of threads to drag it out over her announcement weekend seems like a marketing campaign for the reporters & HuffPo.”

Tom Watson: “I am also a fan. But thought the story was bad.”

Amanda Terkel, HuffPost: “I’ve seen lots of cable news speculation about our sources, their motivations, and our reporting. We’ve had 0 requests to talk about our story (with the exception of @johniadoarola).”

Terkel defends her story on Sen. Klobuchar treating her aides like dirt

“On the one hand, days of this weird yet non-debilitating ankle pain that is now almost gone; on the other hand, I might lose my Goddam mind if I don’t go to the pool tonight.” — Armin Rosen, Tablet Mag.

Jacob Wohl says lefty writers hit on him a lot

“Saying ‘fuck you’ is not propositioning you. Just for the record.” —Liz Mair, GOP communications strategist.

Jacob Wolh is a former columnist for The Gateway Pundit. He’s also described as a “troll” and a far-right conspiracy theorist.

She was responding to this: 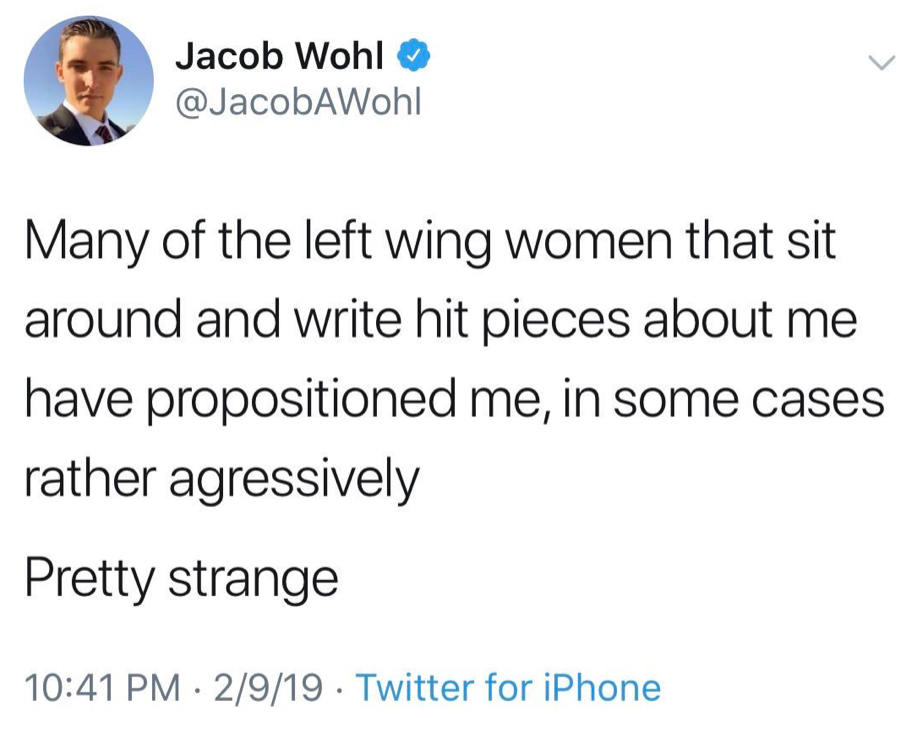 CNN’s Jim Acosta bitches about the state of journo affairs: “Groups like Reporters Without Borders shouldn’t have to announce they are looking into what happened at Trump rally in El Paso last night. But here we are.”

He was referring to this statement from Reporters Without Borders:

“RSF is deeply concerned by this physical attack against a @BBC cameraman at a Trump rally. As we continue to look into what happened, we firmly denounce all physical violence against reporters for doing their jobs. This is unacceptable in the country of the First Amendment.”

Here’s the story from the BBC.

ABC “The View” co-host Meghan McCain‘s “hissy fits” may be becoming a problem. The Splinter News headline overshoots the situation. But the message stands: Trouble is brewing between McCain and c0-host Joy Behar. Here.