Robert Jeffress, senior pastor of one of the nation’s largest churches and a prominent evangelical supporter of President Donald Trump, criticized so-called “Never Trump” evangelicals as “spineless morons” who “cannot admit that they were wrong.”

“Let me say this as charitably as I can,” the First Baptist Dallas pastor said during a Wednesday appearance on “The Todd Starnes Radio Show”. “These ‘Never Trump’ evangelicals are morons. They are absolutely spineless morons and they cannot admit that they were wrong.”

To Jeffress and many other Christians who support Trump, it’s more about the policies, particularly on abortion, than the personal character of the person behind them. (OPINION: Do Christian Schools Need To Be ‘Exposed’ For Bigotry?) 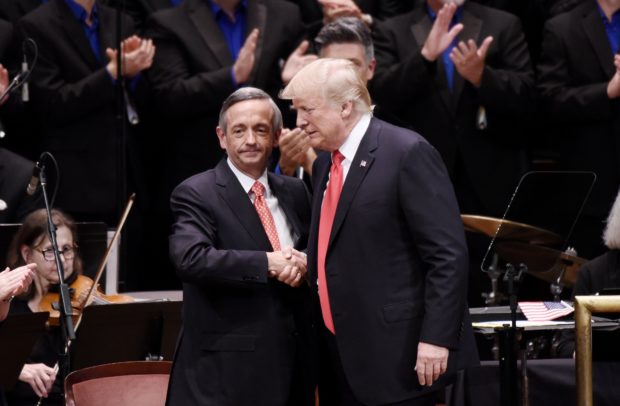 WASHINGTON, DC – JULY 01: (AFP OUT) US President Donald Trump is greeting by Pastor Robert Jeffress during the Celebrate Freedom Rally at the John F. Kennedy Center for the Performing Arts on July 1, 2017 in Washington, DC. (Photo by Olivier Douliery-Pool via Getty Images)

“This is an issue of life and death,” he said. “This is so black and white, so much about good versus evil. I don’t get it. It really goes to the core of who we are as a country and what kind of a country we have in the future and if we can’t get this issue of life right – I just don’t know where we’re going to go down the road.”

The megachurch pastor had strong words for the Democratic governors of Virginia and New York, both of whom have made news of late for their positions on abortion. (RELATED: Jerry Falwell Jr: It’s ‘Immoral’ For Evangelicals To Not Support Trump)

“It is the sign of what Romans 1 in the New Testament calls a depraved mind that would allow that to happen,” he told Starnes.

Listen to the podcast here.