Do an online search, and you’ll find piles of information about the maximum range of slugs and buckshot. Most base conclusions upon mathematical data, not the real world. Of course, in most in-the-home scenarios, the type of shell used matters little—provided you can deliver it accurately before your attacker does. But, it is wise to know your limitations.

Fact is, your load’s maximum range alone is worthless. What is important is your maximum practical range (MPR). Your MPR is the maximum distance at which your specific setup—shotgun, choke, load, sights and your ability—will stop a threat every time. It includes three factors: Your gun and load’s terminal ballistic performance, the target’s mental and physical makeup and your ability to hit that target.

Gelatin tests offer a baseline for how a bullet performs and a great photo for manufacturers to tout. But gelatin doesn’t mimic the bone, sinew, fluid and muscle of living animals. The best test is flesh and blood.

Before anyone condemns me for comparing deer hunting to combat, I’m not; I’m comparing deer to humans. While they are different species, they are much closer in physiology and tenacity for life than gelatin: Both adult males weigh about the same (roughly 175 pounds) and both require sufficient tissue and organ disruption, blood loss and/or trauma to stop. To discount centuries of hunter observations about killing power just because it offends someone is a waste. There is one big difference, however. In hunting, it’s a cardinal sin to wound an animal, but in combat, a wounded attacker is a less effective one. Regardless, this story is about stopping threats, and here are some valuable observations. The combat veterans with whom I have spoken concur with them.

Chip Watkins owns Monquin Creek, a deer-hunting operation in Virginia. A lifelong whitetail hunter who uses dogs and a shotgun loaded with buckshot, Watkins has taken more than 400 deer and witnessed thousands hit the dirt. Once, he killed a deer at 105 yards with buckshot. He says four pellets hit the buck in the chest/lungs and the deer expired in under a minute. Watkins was using a 26-inch barreled Remington 870 with a custom choke.

“Normally I use Federal Premium 00 Buck with a modified choke, and I know I can kill a deer to 50 yards, every time.” But most home-defense guns won’t display the same performance as Watkins’ hunting rig.

Tim Richardson is a professional hunting guide in Illinois. The geniuses in government there think buckshot is too maiming for deer, so they mandate either muzzleloaders or slugs for its firearm season. Richardson prefers a scoped, rifled-barreled Savage shotgun with Hornady SST slugs. With a similar rig he saw a client shoot and kill a 275-pound buck at 236 yards. His MPR, however, is 200 yards, but he says that 75- to 125-yard shots are routine. While this highlights what a slug-optimized shotgun can do, it’s not realistic for your smoothbore Remington 870. 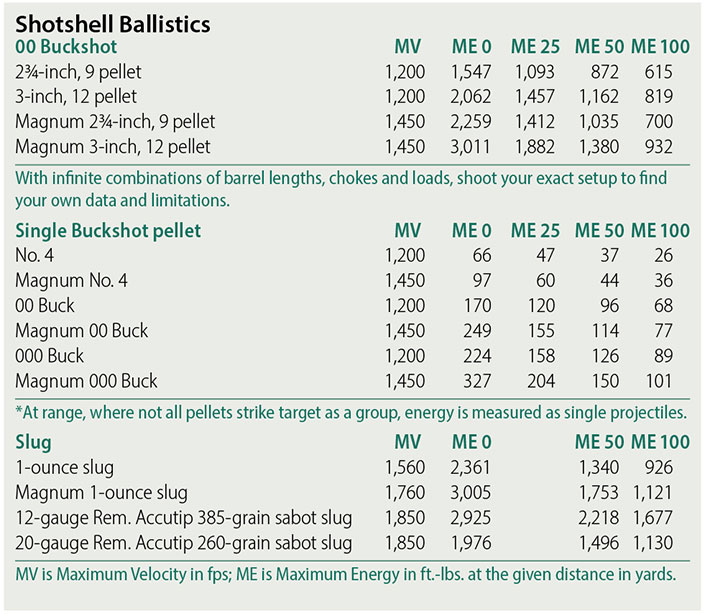 My home-defense shotty of choice is a Mossberg 930 Watchdog with an 18-inch barrel, single-bead sight and cylinder choke. It basically follows the buckshot rule of thumb that says the pattern will spread 1 inch for every yard. However, at 40 yards my load’s pattern spreads to 45 inches, with only a couple pellets in the vital zone. So 30 yards is my maximum practical range with buckshot. Certainly, my hunting shotgun that utilizes a Tru-Lock full choke is closer to Watkins’ max—it spreads 15 inches at 30 yards—but the reason I chose the Mossberg is for its compactness, handling and capacity. Inside of 10 yards, where I plan on defending my home, I want that inch-per-yard cylinder spread.

For a slug that has ample energy, maximum practical range boils down to the shooter’s ability to hit vitals. Using Federal Premium Barnes Expander slugs in my Mossberg’s bead-sighted smoothbore from a tactical rest, I averaged 4-inch groups at 50 yards; 6-inch groups at 75 yards and 10-inch groups at 100. I consider the vital zone of a person to be about 10 inches wide, so my MPR is 100 yards. I was also surprised to learn that at 50 yards, this load printed 12.2 inches high, which tells me I should aim that much lower to hit center mass. Certainly the use of ghost-ring sights or an optic can increase your MPR immensely. But I don’t think the reward of being able to shoot at 150 yards is worth the trade-off for its slowness and bulk. Besides, if danger lurks at 125 yards, I might go fishing instead.