OTTAWA — Hundreds of angry energy sector workers arrived in Canada’s capital Tuesday in their big rigs after a week-long trek from Canada’s oil country of Alberta to protest the Trudeau government’s economic policies.

The “United We Roll” convoy stopped right in front of Parliament Hill and blocked traffic on Wellington St. for the day, generating a counter-protest by local Antifa activists who carried signs emblazoned with the Communist hammer and sickle symbols. There was some shouting but no violence as Ottawa police stood nearby to monitor the activity.

The protest received criticism from some mainstream media saying the event was tainted by political extremism. Protestors’ rhetoric during the event, however, did not support this contention.

The Official Opposition Conservatives attended the event with leader Andrew Scheer speaking to the crowd of roughly 500 people, saying, “We’re fighting for you. We’re standing with you.” Peoples Party of Canada Leader Maxime Bernier also addressed the protesters.

Protestors are hoping the Liberal Party will get rid of its carbon tax and two bills (C-48 and C-69)— one that will give the Canadian government more power to assess energy projects and another that will ban oil tankers from northern British Colombia.

The protest comes at a difficult time for Trudeau, who is increasingly distracted by a major judicial scandal that prompted the resignation Monday of his principal secretary. (RELATED: Trudeau Principal Secretary Gerald Butts Quits In Wake Of Judicial Scandal) 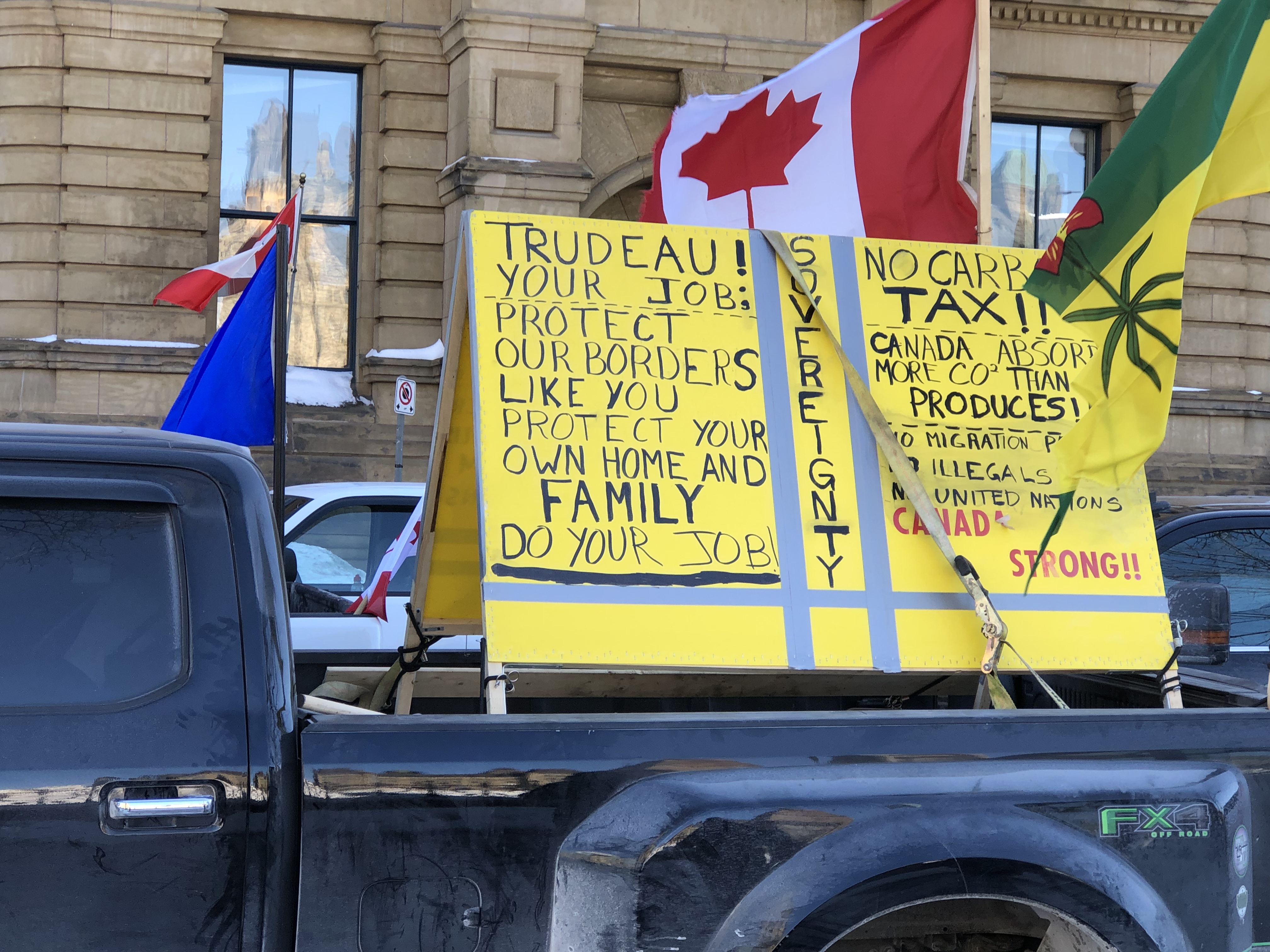 A member of the “United We Roll” convoy delivers a message to Canadian Prime Minister Justin Trudeau Tuesday in Ottawa. Daily Caller photo by David Krayden

Although the convoy came from Calgary, some people came from the other side of Canada. Timothy MacDougall arrived Monday from New Brunswick. He told The Daily Caller that the protest is all about getting Canadian Prime Minister Justin Trudeau’s attention: “He’s not serving the people. . . . He has his own agenda and he doesn’t seem to care what Canadians are concerned about: our future, our children’s future”

MacDougall said it was imperative to get the Trans Mountain pipeline built from Edmonton to Vancouver to export oil. Even though Trudeau nationalized the project last summer, construction has not moved and “the politicians need to get off their butts.” (RELATED: Trudeau Worries About The ‘Impacts’ Of ‘Male Construction Workers’ On ‘Gender Lens’)

Steve Bacovsky who owns Calgary’s National Motor Coach took the trip because, as he stated, Prime Minister Justin Trudeau “is our problem now. It can’t take 10 years to get a pipeline built.”

Bacovsky noted that 10 oil companies have left Canada since Trudeau became prime minister in 2015. He also told the Caller that Trudeau’s carbon tax is “unfair” and will increase pressure on Canada’s energy sector.

Trudeau avoided the protest and did not make an appearance.