According to congressional transcripts confirmed by The Daily Caller News Foundation, Ohr testified that during a conversation on Jan. 20, 2017, the day of President Donald Trump’s inauguration, Simpson said he was worried a major source for the dossier was about to be exposed in the press.

Ohr also testified Steele, who wrote the dossier, asked him during one of their many conversations about how the FBI could protect a source in the event Ohr left the Justice Department.

Ohr, who served as a back channel between the FBI and Steele after the 2016 election, said he and Steele discussed finding an FBI “contact point who could help make arrangements for the safety of the source” if Ohr left the Justice Department.

Simpson’s concerns about protecting the dossier source appear at odds with reports he identified one of the document’s key sources to ABC News reporter Brian Ross.

According to the book “Russian Roulette,” Simpson tipped Ross off to a Belarus-born businessman named Sergei Millian during the summer of 2016.

Millian, the chairman of the Russian American Chamber of Commerce, was identified as a dossier source Jan. 24, 2017, two weeks after BuzzFeed News published the document and four days after Simpson relayed his concerns to Ohr. (RELATED: Alleged Dossier Source Met At Russian Expo With Putin Crony)

Ross interviewed Millian on July 29, 2016. Just a week earlier, Millian had initiated contact with George Papadopoulos, the Trump campaign adviser who would serve as the catalyst for the FBI’s counterintelligence investigation of the Trump campaign.

“[Simpson] was concerned that one of the sources, Chris Steele’s sources, was going to be supposed and that would put the source in personal danger,” Ohr told members of the House Oversight and House Judiciary Committees.

“He says something along the lines of, ‘I — there’s going to be some reporting in the next few days that’s going to — could expose the source, and the source could be in personal danger.'” 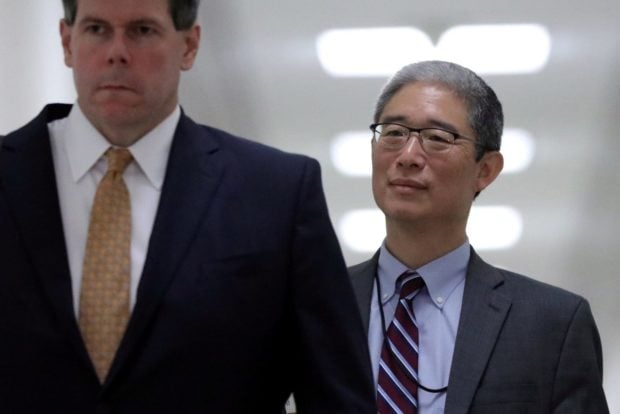 Ohr did not say Simpson was referring to Millian, but Millian is the only alleged source to have been identified in the two-plus years since the dossier was published.

Ohr and Simpson met twice in 2016 to discuss Fusion GPS’s investigation into Trump’s ties to Russia. Ohr’s wife, Nellie, worked as a contractor for Fusion GPS during that project.

Ohr also told lawmakers he shared Millian’s name with the FBI after Simpson identified Millian and Trump attorney Michael Cohen as “possible intermediaries between the Russian Government and the Trump campaign.”

The Wall Street Journal and ABC News (in an article written by Brian Ross) broke the stories that Millian was the source identified as both “Source D” and “Source E” in the dossier.

“Source D” is behind the most salacious claim in Steele’s 35-page report. Described as a “close associate of Trump,” the source claimed to have been present when Trump used prostitutes at a suit in Moscow during a trip there in 2013. The source, who claimed to have helped Trump arrange the trip, also claimed that the Kremlin was blackmailing Trump with a video of the hotel room incident.

Trump has vehemently denied the allegation, which was included in a briefing of the dossier that then-FBI Director James Comey gave to Trump, then-president-elect, on Jan. 6, 2017.

Millian, who has gone underground since being linked to the dossier, was reportedly an unwitting source for an intermediary who worked for Steele. A former MI6 officer who worked in Moscow, Steele reportedly relied on a network of sources and sub-sources to compile the dossier. As Ohr acknowledged in his testimony, the information in the dossier was “hearsay” given that it relied on information not directly obtained by Steele.

Millian denies being a source, but has not addressed whether he could have inadvertently provided information that wound up in the dossier, which largely remains unverified. Despite what is attributed to him by Steele, Millian has told TheDCNF he was not in Moscow with Trump during the real estate mogul’s alleged tryst with prostitutes.

Millian’s link to the dossier poses potential problems for the veracity of Steele’s report.

Trump associates have claimed Millian overstated his links to Trump’s real estate firm. He has also given inconsistent answers about when he met Trump. Millian is known to have met Trump at least once, in 2007. Millian has prominently displayed a photo he took with Trump and Florida businessman Jorge Ramos. In his ABC interview, Millian suggested he met Trump in both Florida and Moscow. But in an interview in June 2017, he said he had only met Trump once, a decade earlier. (RELATED: Fusion GPS Founder Doubted Credibility Of Dossier Source, But Referred Him To Reporters Anyway)

According to “Russia Roulette,” which is written by two reporters who met with Fusion GPS and Steele during the campaign, Simpson believed Millian was a “big talker” who may have embellished his links to Trumpworld.

“Had Millian made something up or repeated rumors he had heard from others to impress Steele’s collector? Simpson had his doubts. He considered Millian a big talker,” authors Michael Isikoff and David Corn wrote in their book.

Fusion GPS did not respond to a request for comment about Simpson’s conversation with Ohr and the claim made in “Russian Roulette.”

In the interview with Ross, Millian made several cryptic remarks about Trump while suggesting he had contacts of his own at the Kremlin.

Millian, who claimed to have worked as a broker for Trump’s real estate company, asserted Trump had “tricks up his sleeve” to win the election.

“You think so?” Ross asked.

“That you will soon see in the election, yes,” said Millian.