A conservative activist was punched in the face by another person while at a recruiting event for Turning Point USA at the University of California at Berkeley Tuesday.

Imagine if the attacker was wearing MAGA hat, would be national news!

This is the violent left!

A man wearing a black shirt and pants walked up to Hayden Williams, who works for the Leadership Institute, and yelled some obscenities at the TPUSA student before throwing a punch at his face. The man then walked away and said “fucking cunt.”

UC Berkeley TPUSA Vice President Mina Castro said to The Daily Caller News Foundation over the phone that she arrived at the scene after the altercation and found Williams “injured” and the organization’s signs “torn apart.”

“I called the police because we needed to file this up,” Castro said.

Castro added the man was a fellow student and likely assaulted Williams because he had a Make America Great Again (MAGA) sign.

“OH MY GOD THE MAGA PEOPLE ON UC BERKELEY CAMPUS YESTERDAY GOT PUNCHED IN THE FACE BY SOMEONE THIS MAKES ME FEEL EMOTIONALLY SO MUCH BETTER,” Yuvi Panda, who works for Berkeley Institute for Data Science, wrote Wednesday. “Thank you, random stranger for not letting it go unchallenged. Hope you aren’t in too much trouble. Fuck you, Turning Point USA.”

OH MY GOD THE MAGA PEOPLE ON UC BERKELEY CAMPUS YESTERDAY GOT PUNCHED IN THE FACE BY SOMEONE THIS MAKES ME FEEL EMOTIONALLY SO MUCH BETTER. Thank you, random stranger for not letting it go unchallenged. Hope you aren’t in too much trouble. Fuck you, Turning Point USA.

“WHAT Is sproul here’s name!!!” Twitter user gisselle wrote. “Who socked the ugly maga guy!!! i would like to give him a gift.”

WHAT IS sproul hero’s name!!! WHO socked the ugly maga guy!!!! i would like to send him a gift

“There was some MAGA guy tabling on campus today and someone punched him in the face LMFAO,” user going by the moniker i am tall tweeted.

The confrontation started when “one of the two men slapped the phone out of the victim’s hand,” according to an email screenshot from Berkeley Antifa on Twitter. 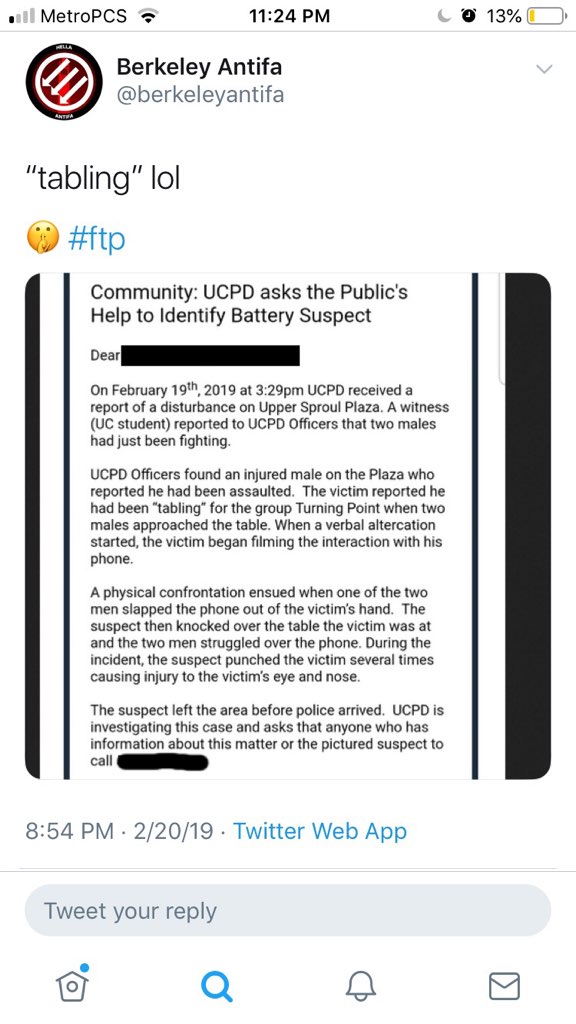 “Our commitment to freedom of expression and belief is unwavering,” UC Berkeley said in a statement sent to TheDCNF. “At this point we have no information indicating that the perpetrators are affiliated with the university. If it is determined that students were involved we will not hesitate to impose serious consequences as per our student conduct process and, if warranted, the criminal justice system. The same holds true should the evidence suggest a member of the public was involved.”

UC Berkeley was once the birthplace of the free speech movement in the 1960s. But in recent years, the campus has been hostile toward conservative ideas and thinkers, though the university disputes this. Berkeley said it spent $4 million in the last year “to provide security so conservative student groups could hold safe and successful events,” a statement from Assistant Vice Chancellor Dan Mogulof said to TheDCNF over email.

Conservative commentator Ann Coulter said she would no longer give a speech at the university after losing support from conservative groups calling it a “sad day for free speech,” according to The New York Times in April 2017. UC Berkeley previously said it could not host her on an initially scheduled date and time over security concerns.

Williams and the UCPD did not immediately respond to TheDCNF’s request for comment.

Editor’s Note: This piece has been updated to include a statement from UC Berkeley regarding the incident and to reflect that the individual hit is of uncertain, if any, affiliation with UC Berkeley.