Rami Malek nabbed Best Actor Oscar Sunday night at the 91st Academy Awards for his performance in the Queen biopic “Bohemian Rhapsody,” but it was his fall off stage that has everyone talking.

The 37-year-old actor must have been overwhelmed by his win for his role as the late legendary Queen singer Freddie Mercury, because at the end of the show, he slipped right off the stage and fell to the ground, according to TMZ Monday. (RELATED: Spike Lee Talks 2020 Election During Acceptance Speech At Oscars: ‘Do The Right Thing’) 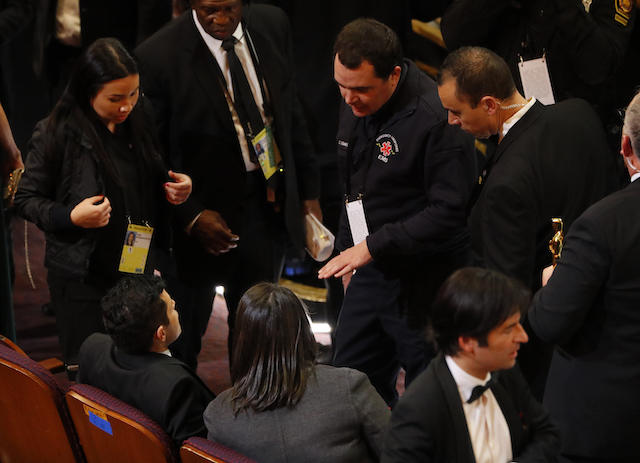 It happened when the camera’s were not rolling. But video of the moment has since surfaced on social media. Check it out. We can’t stop watching. (RELATED: Check Out These Unforgettable Looks From The 2019 Oscars)

THE WAY RAMI FELL I- pic.twitter.com/3YmdjPcEln

In the clip, we can hear the “Mr. Robot” star hit the ground hard and other people around him react, asking if he is okay. He was treated by paramedics and is said to be doing just fine, despite possibly being a bit embarrassed.

The show was without a host this year after Kevin Hart backed out of doing the job over past tweets that were deemed homophobic. So instead, the night kicked off with the hit song by Queen, “We Will Rock You,” sung by Adam Lambert.