Democratic senators on Capitol Hill had mixed responses — from saying it’s a woman’s choice to dodging the question altogether — about whether they were comfortable with calling abortion immoral in any circumstance.

The Daily Caller News Foundation asked nearly 10 Democratic senators about abortion and if there was a point at which it would be considered immoral Tuesday and Wednesday after the Republican-led Senate failed to pass a bill, which would mandate medical care and legal protections to infants born alive after an attempted abortion. Doctors who don’t comply would be punished.

Republicans were only able to get three Democrats to vote in favor, crossing party lines to vote for the bill, while three Republican lawmakers did not vote. Republicans were seven votes short of passing the bill, in what President Donald Trump called “one of the most shocking votes in the history of Congress.”

Democratic California Sen. Kamala Harris, a 2020 hopeful who voted against Republican Nebraska Sen. Ben Sasse’s bill, would not say if abortion was ever immoral.

“I, nor frankly anyone in my caucus, is pro-abortion. But I think the decision when and under what circumstances to terminate a pregnancy is something best left to a woman, her doctor, and her minister or family,” Coons told TheDCNF. “I don’t think infanticide is and was illegal, and I didn’t think the vote last night advanced that issue one bit.” 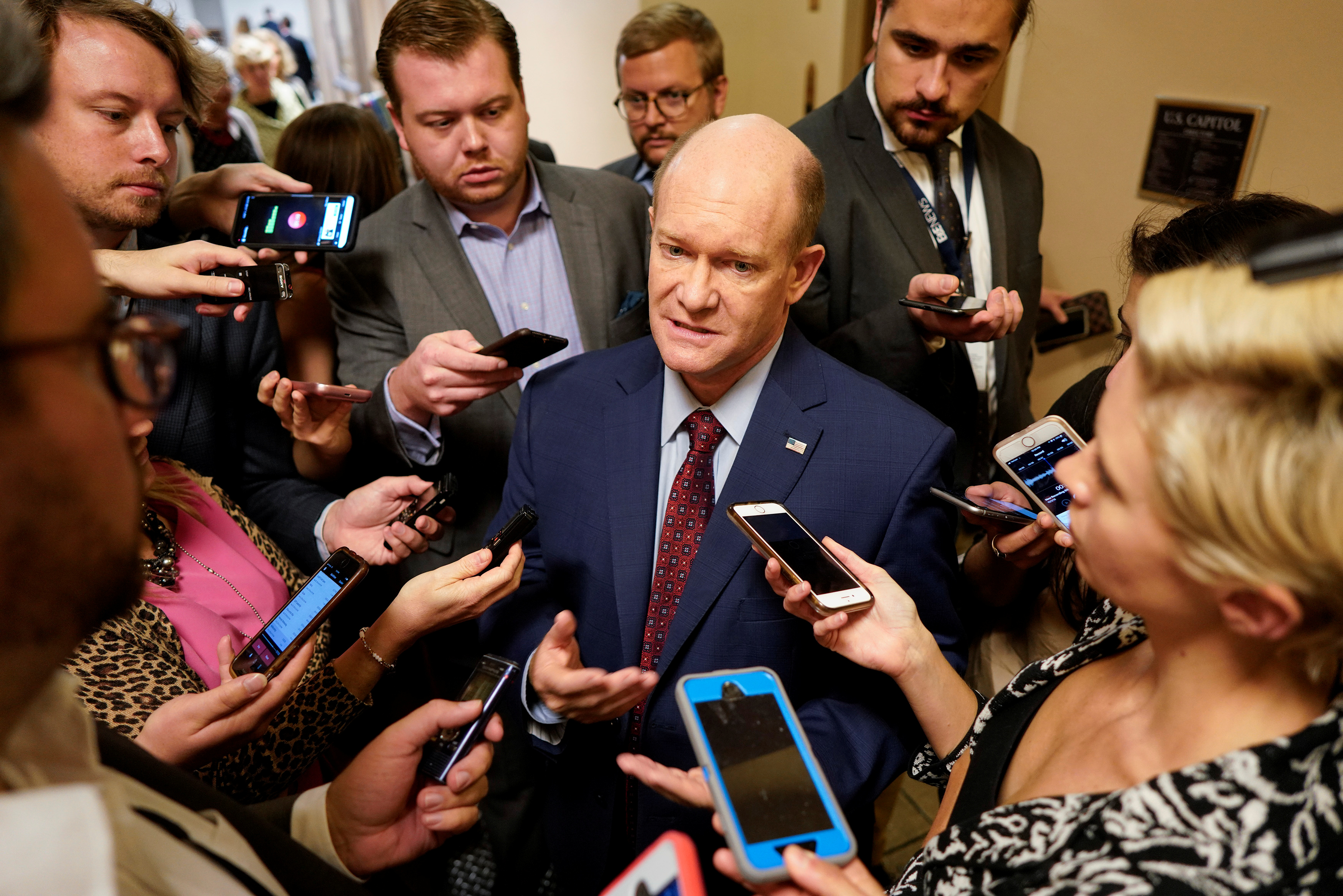 Sen. Chris Coons speaks with reporters on the way to the Senate floor on Capitol Hill in Washington, U.S., October 3, 2018. (REUTERS/Aaron P. Bernstein)

Many Democratic senators refused to answer the question, such as Hawaii Sen. Mazie Hirono, who also voted against the bill, and Alabama Sen. Doug Jones, who was one of three Democrats to vote in favor of Sasse’s bill. Hirono refused to acknowledge the question and a member of her staff told TheDCNF “we don’t talk to you, I don’t know why you keep asking.”

Jones told TheDCNF he is “not going to answer abortion questions,” saying, “I’m just not going to answer. You can talk to my communications director.” (RELATED: Here Are The Three Democrats Who Voted Against Infanticide)

Democratic Connecticut Sen. Dick Blumenthal responded to a question about whether abortion could in any way be immoral.

“I have to think about that.”

When TheDCNF reminded Blumenthal he voted in favor of a bill that supports abortion, he said, “let me think about that and I’ll get back to you. Do you have a card?”

TheDCNF ran into Blumenthal on Wednesday and reminded him of the question, asking if he had thought about it.

“I can think of instances where it might be,” he said. “For example, if it is performed with criminal intent. If there is criminal intent or, in fact, intent to harm another person, I can see how that might be immoral.”

Democratic Virginia Sen. Tim Kaine was the only Democrat asked who said there were cases in which abortion could be immoral, saying he has “supported all kinds of regulations that I think are completely consistent with Roe v. Wade. So, yeah — many over the course of my career.”

However, he did not vote in favor of Sasse’s bill Monday night.

Vermont Sen. Bernie Sanders, a 2020 hopeful, ran away from TheDCNF’s question Wednesday, sprinting down Senate escalators and into the Senate subway, while refusing to answer the question as the subway doors closed.

“The Democrat position on abortion is now so extreme that they don’t mind executing babies AFTER birth,” Trump said Monday.

Wyatt Dobrovich and Connor Moldo contributed to this report.