Private prison company GEO Group responded Wednesday with its own analysis it says shows some of its facilities are safer than comparable federal facilities after accusations from Democratic Massachusetts Sen. Elizabeth Warren and other liberal lawmakers that the company lobbies to fill its prisons.

“For over three decades, GEO has been a successful service provider to the federal government with a longstanding record of delivering high-quality service to U.S. Immigration and Customs Enforcement (“ICE”) under both Democratic and Republican Administrations. Importantly, the services we provide for ICE today are no different than the service we provided for eight years under President Barack Obama’s Administration,” GEO said in a letter reviewed by The Daily Caller News Foundation.

The letters were hand-delivered to Warren’s and other senators’ offices Wednesday. Warren and others, including Democratic New Jersey Sen. Cory Booker and Independent Vermont Sen. Bernie Sanders, sent the letter to GEO dated Nov. 15 requesting copies of its contracts with ICE for detaining immigrants, reviews of conditions at its facilities and more. No Republicans were signatories of the letter, which was also sent to another private prison company, CoreCivic.

The senators’ letter had a deadline of Nov. 30, just over two weeks after the letter was sent, for their requests. GEO responded on Nov. 21 that it could not comply that soon but would “provide a response, in coordination with ICE, at a reasonable time thereafter.” (RELATED: Activists Want Private Prisons To Pay ICE Detainees Minimum Wage, But No Answers On How Taxes, Social Security Would Work)

“The Obama Administration, citing high rates of safety and security violations at private prisons, announced in an August 2016 memorandum that DOJ would reduce the federal government’s reliance on private prisons,” the senators’ letter stated. “But just one month after President Trump’s inauguration, DOJ rescinded the memorandum, and has since — largely through changes in immigration policy — contributed to significant increases in private prison profits.”

Much of GEO’s lengthy response letter addressed the rescinded memo from then-Deputy Attorney General Sally Yates to the Bureau of Prisons based on a study by the Office of the Inspector General (OIG). 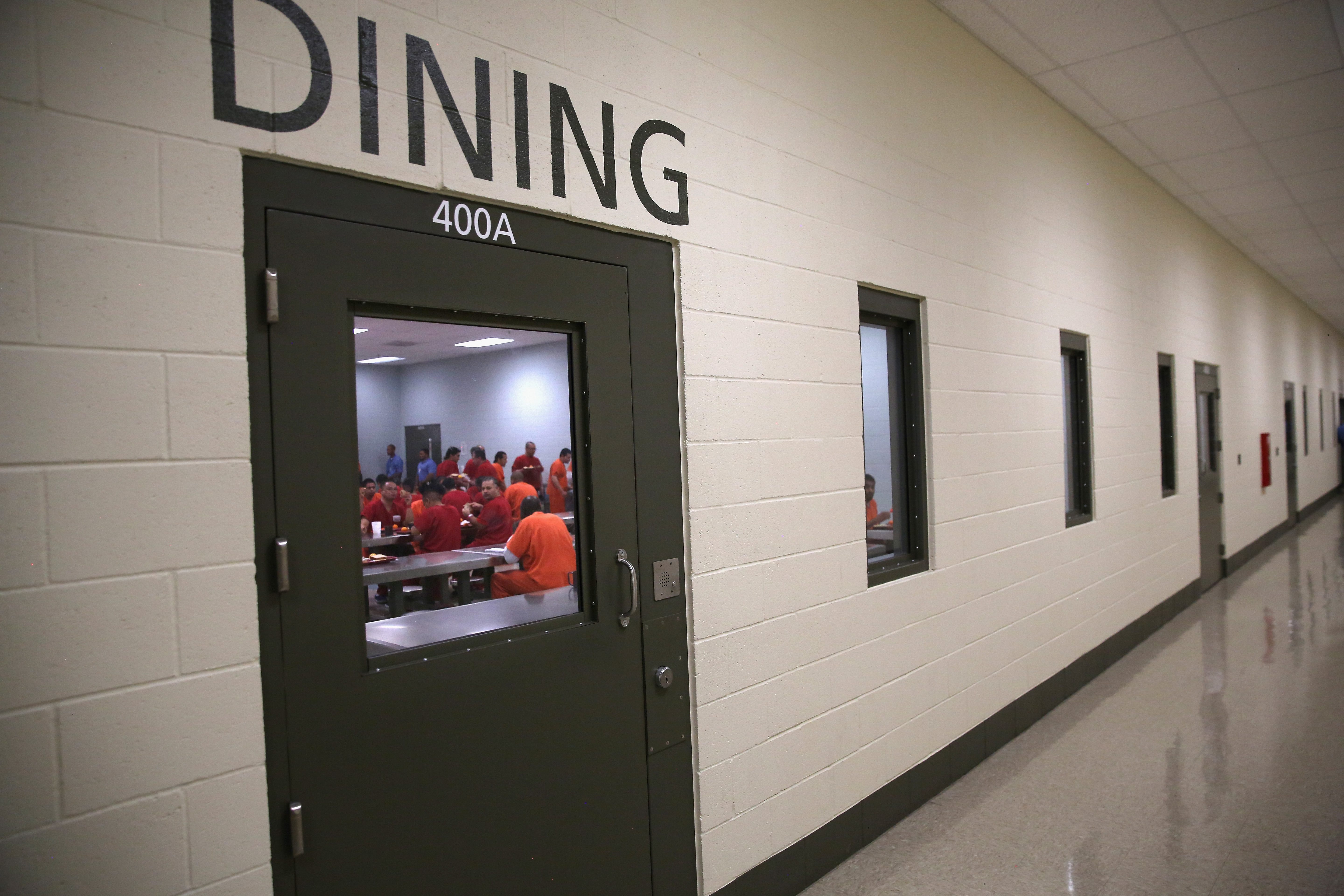 Immigrant detainees eat lunch, one of three meals a day, at the Adelanto Detention Facility on November 15, 2013 in Adelanto, California. (Photo by John Moore/Getty Images)

GEO also said in the letter that the company conducted its own analysis and found contract facilities are “in many respects actually safer” than BOP facilities and have proportionally less deaths in custody, inmate fights, suicides and other indicators.

The senators’ letter also accused GEO of engaging in “aggressive lobbying efforts to promote policies that boost its profits—regardless of the human toll that those policies inflict.” 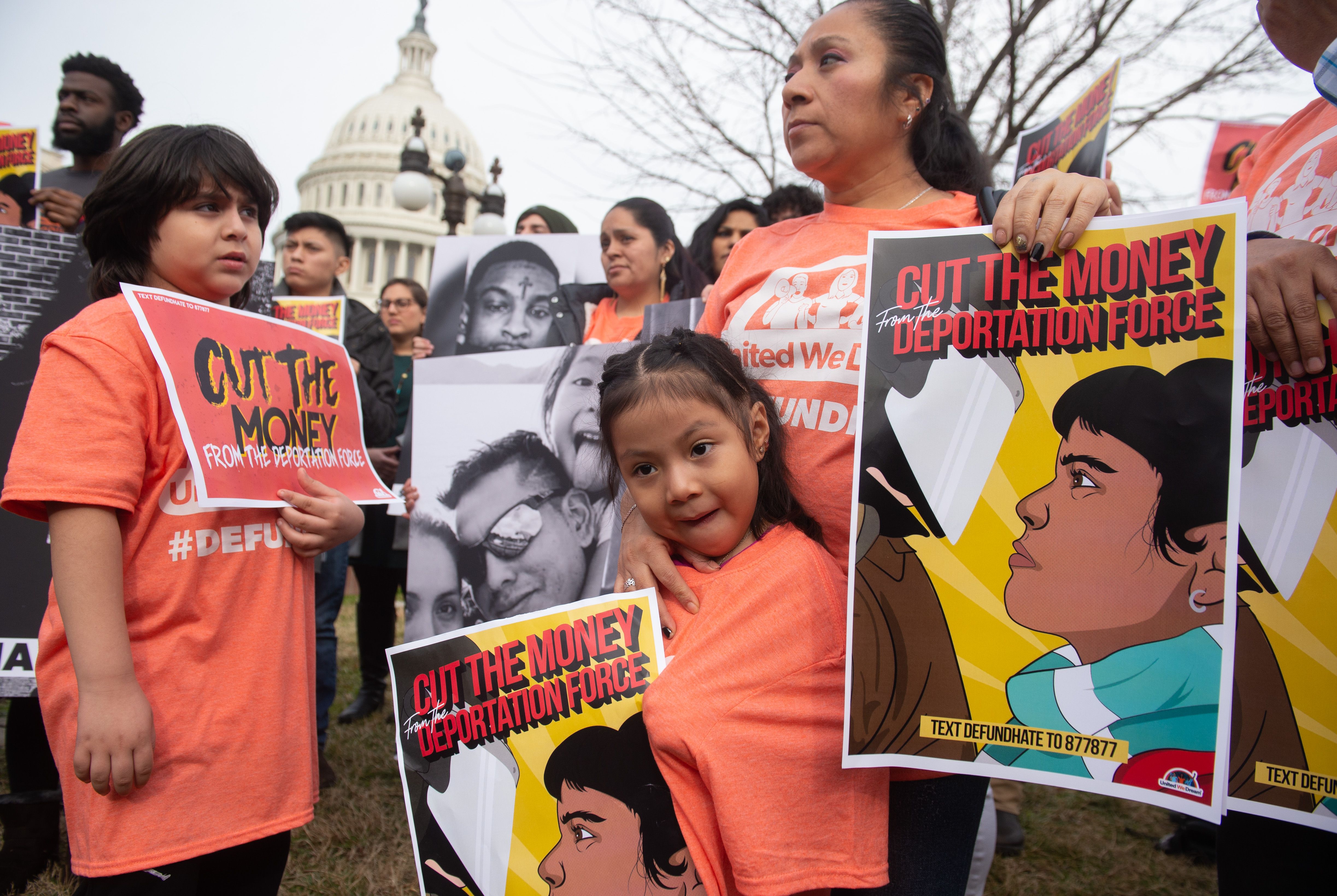 Relatives of detained individuals attend a press conference calling on Congress to cut funding for US Immigration and Customs Enforcement (ICE) and to defund border detention facilities, outside the US Capitol in Washington, DC, February 7, 2019. (SAUL LOEB/AFP/Getty Images)

The senators also highlighted that GEO and GEO subsidiaries gave hundreds of thousands to Trump-linked causes, including $250,000 to his inaugural committee.

“We have never engaged in advocacy or lobbied government officials regarding policies, regulations or laws related to the length of prison sentences, whether or not to punish certain behaviors, or the basis for an individual’s detention or incarceration,” GEO responded.

GEO said its “lobbying activities focus exclusively on promoting the benefits of public-private partnerships” in the Wednesday letter.

The senators also asked for copies of GEO facilities’ contracts with ICE as well as other documents, like reviews of conditions in facilities, but GEO deflected the requests to ICE.

GEO and other detention facility operators have come under fire in recent months. A surprise government inspection of GEO’s Adelanto ICE Processing Center found inadequate medical care and inappropriate use of solitary confinement in May 2018. But GEO said it had fixed the issues by early September 2018, nearly a month before the results of the inspection were released to the public.

Warren’s office did not respond to TheDCNF’s follow-up request for comment by time of publication.