Vandals defaced a former synagogue in eastern France with swastikas in the latest of a series of anti-Semitic desecrations plaguing the region.

Staff at the synagogue-turned-sports-facility in the town of Mommenheim discovered the swastikas on the building’s door and facade, which still bears Hebrew lettering, Monday, according to The Associated Press.

The anti-Semitic incident came hot on the heels of the Saturday vandalism of a monument honoring a synagogue ransacked and burned by Hitler Youth in Strasbourg. The culprits knocked the memorial stone off of its base and left it lying on the ground. (RELATED: ADL Calls For Resolution Condemning Anti-Semitism following Rep. Omar’s Comments)

Strasbourg deputy mayor Alain Fontanel lamented the vandalism of the monument on Twitter, saying it was the third time a synagogue had been attacked in the city.

“Sadly, history repeats itself,” Fontanel said, according to DW.

The act of destruction likely involved more than one person, as the memorial stone weighed “300 or 400 kilograms,” according to Mayor Roland Ries. 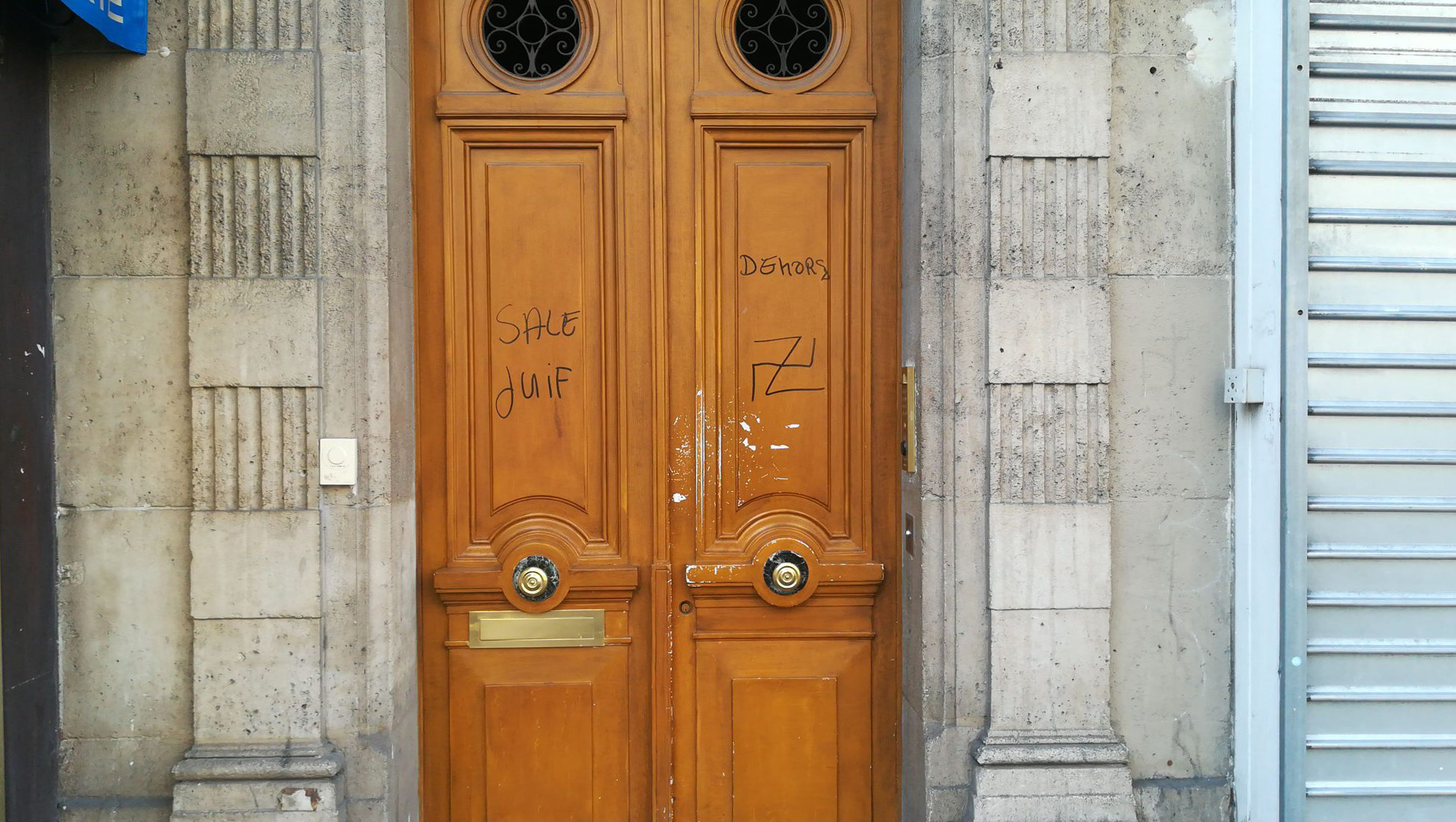 A picture taken on February 21, 2019 in the rue d’Alesia in the 14th arrondissement of Paris shows anti-Semitic tags reading “dirty Jew, get out” and a swastika tagged on a door. (ALEXANDRE HIELARD/AFP/Getty Images)

Vandals also spray-painted swastikas on 96 Jewish grave stones in February in the town of Quatzenheim, a little over 12 miles away from Strasbourg.

That incident, in tandem with increasing expressions of anti-Semitism from certain factions within the “yellow vest” protest movement, prompted French President Emmanuel Macron on Feb. 19 to decry what he and others see as a resurgence of anti-Semitism throughout Europe and to promise legal reforms intended to combat anti-Semitism.

“Our country, and for that matter all of Europe and most Western democracies, seems to be facing a resurgence of anti-Semitism unseen since World War II,” Macron said, according to DW.

A crowd of approximately 20,000 French citizens rallied in Paris day earlier to protest anti-Semitism, with an estimated thousands of others rallying in other locations throughout France. The rallies came partly in response to recent anti-Semitic incidents like the desecration of Jewish graves, and in response to a report from France’s interior ministry that showed a 74 percent increase in anti-Semitic incidents in France from 2017 to 2018.