Jones, a vocal proponent of sentencing and prison reform, had a different take on Manafort’s case while discussing the issue with CNN’s Anderson Cooper and former Virginia Attorney General Ken Cuccinelli Friday night.

“Are white collar crimes not taken as seriously as other kinds of crimes?” Cooper asked, after playing a clip of California Senator Kamala Harris making that case.

“Quite obviously,” said Jones. “You’ve seen people like Meek Mill, the guy served more time and been on probation for years and years. He actually got a two-year return to prison sentence for popping a wheelie. Literally for lifting his motorcycle wheels off the ground. He got two years for that. So when you’ve got that stuff going on in communities across America, it is very, very difficult for us who are used to seeing big, big sentences coming down for pretty small stuff to see something this big go down.”

Jones added that usually people get “a house dropped” on them for “lying to the feds.” 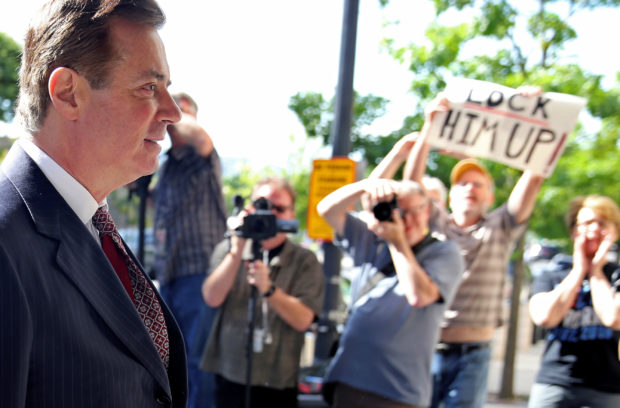 Paul Manafort arrives for arraignment on a third superseding indictment against him by Special Counsel Robert Mueller on charges of witness tampering, at U.S. District Court in Washington. REUTERS/Jonathan Ernst

“Hopefully next week there will be some adjustments here,” he said. “Anybody who knows how justice is meted out in regular communities especially if poor communities in this country is shocked by this sentence.”

Cuccinelli countered by bringing up the O.J. Simpson trial. “I think it may be anyone with money,” he said. “It wasn’t because O.J. Simpson was black. It was because the defense could match the prosecution’s resources. And that almost never happens. I can tell you as a former attorney general, that almost never happens. So people with money can afford to do things that people without money can’t afford to do.”

The former Virginia attorney general added that a “politically charged case” like Manafort’s is not “a good data point for the broader discussion about fairness and criminal sentencing” before noting that the former Trump campaign chair will be sentenced next week for lying to the feds. (RELATED: Manafort Judge: He’s Not Being Convicted Of Colluding With Russia)

Jones then made his case for “systemic bias” in the criminal justice system against minorities.

The statistics just don’t lie here and it is really unfortunate. At every stage of our criminal justice system, if you are a person of color, you get worse treatment. Even when you control for income, even when you control for neighborhood, even when you control for educational attainment. African Americans and white Americans use drugs, illegal drugs in exactly the same rate. Study after study shows that. And yet, African Americans are six times more likely to go to prison for illegal drug use. Now you can come up with a lot of different explanations. It’s hard. If it’s 50 percent more or 20 percent more, 100 percent more. Six times more? That shows a systemic bias that we have to deal with and while this case is unusual, as Ken said because of the political nature of it, it is all too often the case that people who have all kinds of privilege, whether it is money, race, education, back ground, they wind up getting a better break. Brian Stevenson, this has become almost like the Martin Luther King of our time working on these issues says it is actually better to be poor. It is better to be rich and guilty than poor and innocent. That’s how badly we’ve gotten off with this system. And I think it is fair to talk about it.

Jones concluded with his wish that we “see some more justice” next week. (RELATED: White Offenders Receive Higher Sentences Than Other Races, Study Says)

“But I don’t understand why this judge went above and beyond just giving this, I think insulting sentence to praise the guy, to say he is blameless,” he said. “I don’t think even Paul Manafort has as high an opinion as of himself as this judge did. So it is just a bizarre case. And I think it does send the message of a double standard.”