Alabama Republican judge Roy Moore said on the American Family Radio show “Focal Point” Friday he may try to run for U.S. Senate one more time, but according to Republican sources in the state, the chances of Moore being the Republican nominee a second time is slim to none.

Moore’s first try at the U.S. Senate against Democrat Doug Jones in 2017 was a failure after The Washington Post reported on four women who accused Moore of sexual misconduct just a month before the special election to fill Jeff Sessions’ vacated seat. (RELATED: Roy Moore Is ‘Seriously Considering’ Another Run For The Senate In Alabama) 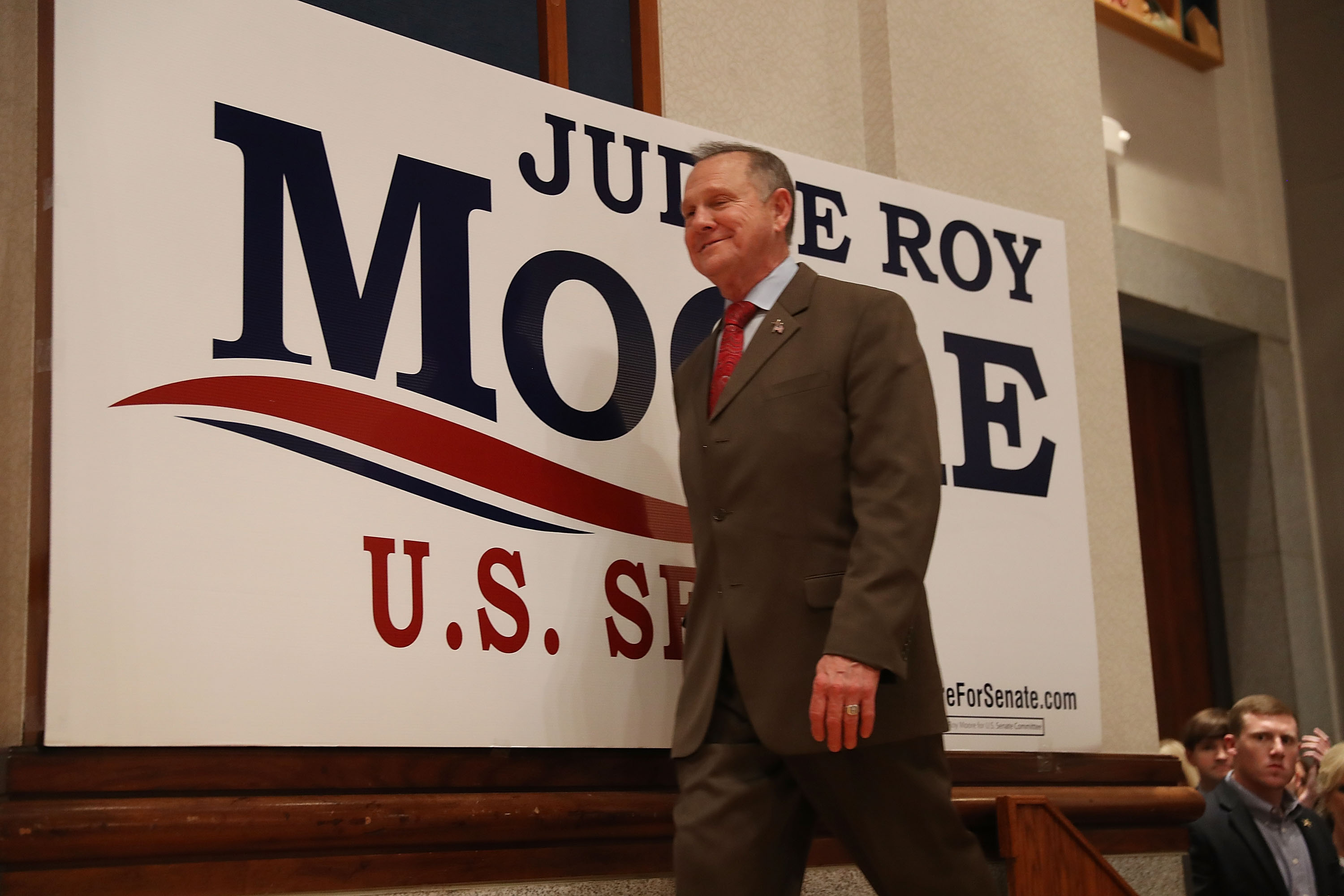 MONTGOMERY, AL – DECEMBER 12: Republican Senatorial candidate Roy Moore arrives on stage to speak about the race against his Democratic opponent Doug Jones is too close and there will be a recount during his election night party in the RSA Activity Center on December 12, 2017 in Montgomery, Alabama. The candidates are running in a special election to replace Attorney General Jeff Sessions in the U.S. Senate. (Photo by Joe Raedle/Getty Images)

Moore has always denied the claims made by the women and has sought legal avenues to clear his name even after the election was over. (RELATED: Senate Republicans Call For Moore To Drop Out If Sexual Conduct Allegations Are True)

Although supporters of Moore’s first run may think he was unfairly portrayed and covered by the Washington, D.C. media, Alabama Republicans say there is no groundswell of support building for him.

According to the consultant, a Republican party event in Winston County, a rural Evangelical area of the state, happened just days ago, where Sheriff Joe Arpaio was the speaker and Moore was in attendance.

“Everybody was wanting to talk to Arpaio and Congressman Robert Aderholt was there. People were talking to Aderholt. Moore just wasn’t getting the buzz that I think he probably thought he might get.”

“The big draw at that was not Roy Moore being there. It was Jeff Sessions being there. And there are some people that were just kind of like, ‘Oh it’s Roy Moore. Let me go say, hey, because it’s Roy Moore –because he’s been around politics for the last 20 years.’”

The party official continued, “But most people just wanted to move on. Even people I know that were diehard in that cycle for Roy Moore people who were like, ‘No, he’s getting screwed — The liberal Washington Post’ kind of thing –They still believe that, but they just wanted to move on.” (RELATED: Alabama AG Opens Probe Into ‘False Flag’ Operation Targeting Roy Moore’s Campaign) 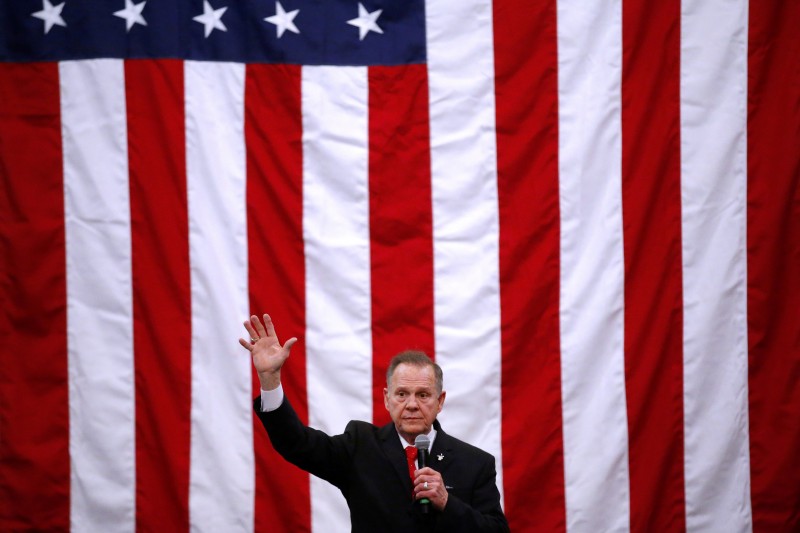 Some may argue that Moore will run regardless of whether he has lots of support from grassroots activists and the state party.

However, if that is the case, Moore may not even make it on to the Republican Party ballot, as political parties in the state can legally remove primary candidates from their ballots.

“Everybody that qualifies in Alabama has to qualify with the state party … they don’t have to get any signatures or anything like that. They just fill out a form and pay a check to the state party. There is a challenge process that can be brought for various reasons,” the Alabama Republican Party official told The Caller. (RELATED: Rep. Sherman Says Don’t Blame His Party Over False Flag Campaign Against Roy Moore)

The Alabama Republican Party Steering Committee has routinely removed candidates from their primary ballot for numerous reasons over the years.

“The history more or less is obvious,” Terry Lathan, Alabama Republican Party Chair said as a county Chair in 2014. “The Republicans have not been in the majority but we are now, so the party feels very strongly about protecting our gate. We want to allow everybody to participate, but you can expect us to watch candidates closely and ask questions.”

In 2017, it was already too late for the Alabama Republican Party to remove Moore from the Republican ballot and mount a solid write-in campaign for another candidate.

Keeping a candidate off the ballot is not always the best solution from keeping a candidate from running for office as he or she can always run as a successful independent candidate. (RELATED: Alabama Rep. Bradley Byrne Announces Campaign For U.S. Senate)

When a local Alabama Republican Committee removed a Marshall County judge from the primary ballot in 2012, he ran as an independent and won his re-election.

However, as an independent candidate, Moore would not have the financial and political backing of the state and national party and therefore have fundraising issues ahead of him.

The political environment facing Alabama Republicans is different going into the 2020 Senate race as opposed to the special election in 2017.

Despite the overwhelming number of conservative voters in the state, the special election became entangled in controversy at the offices of the Alabama governor, State Attorney General, and U.S. Senate Majority Leader Mitch McConnell.

Alabama’s then-Republican governor in 2017, Robert Bentley, who was in midst of a salacious sex scandal, appointed Alabama’s former Attorney General Luther Strange, the official who had overseen the investigation into Bentley’s ethics issues at the time.

Ultimately, Bentley was forced out of office through resignation and Sen. Strange had little support from Alabama Republican voters as a result, especially since Senate Majority Leader Mitch McConnell had thrown his support behind Strange. McConnell also threatened to blacklist Republican consultants who worked on any other Republican candidate’s campaign for that Senate seat, including Alabama Republican Rep. Mo Brooks, a favorite among grassroots conservatives, who wanted him in the primary.

The move by McConnell angered activists on the right in Alabama who ultimately supported Moore during the special election’s primary and helped him become the party’s nominee.

The Caller reached out to Judge Moore about the 2020 Senate election and is awaiting his response.