There’s something about journalists and traveling. Maybe it’s the boredom. The waiting. Or it’s the perks of being a journalist in 2019. Hop on social media during a crappy trip and an “influencer” is bound to get results.

Late Friday night, Leon Wolf, managing editor of Glenn Beck‘s TheBlaze, began tweeting at American Airlines. An obese man was seated next to him. Leon wasn’t happy about it. He tends to tweet about sneezing too hard, inexplicably shaving or various types of cuisine, so this was an exciting departure from his norm.

“Wanna give a shout out to @AmericanAir for not requiring the guy who sat next to me on my last flight to purchase two tickets even though he could not prevent himself from spilling a good four inches into the space occupied by my seat,” he began.

A journalist publicly whining about his or her travel experience borders dangerously close to saying, “Don’t you know who I am?” But so be it — you don’t even need to be that well-known to make it work. And if it gets the attention of an airline or Amtrak’s social media person, wasn’t it an act of service for all? 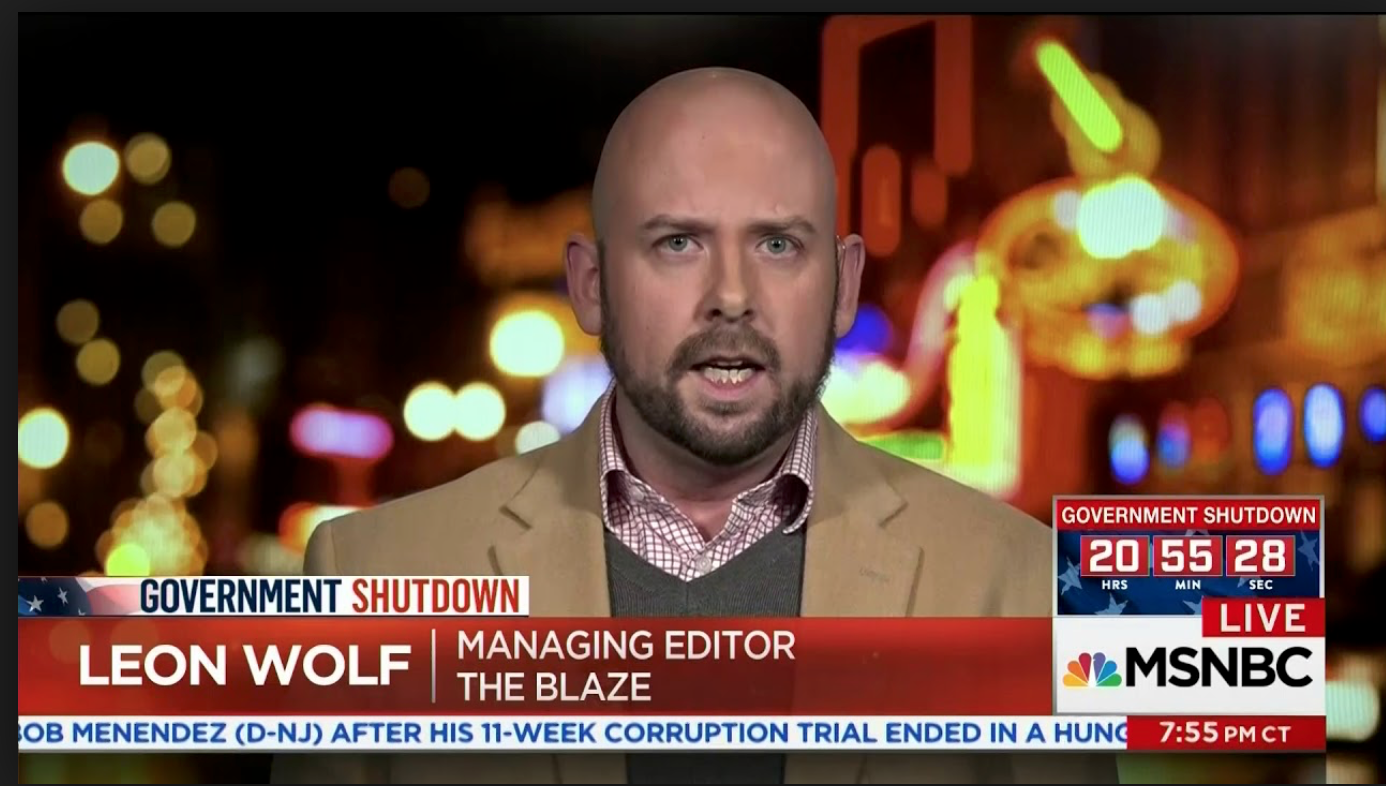 He quickly added, “Super happy right now that I have a sore back and hip from having to sit at a 20-degree angle for two hours and that I had my elbow banged by the cart every time it came by since I was being forced to lean out into the aisle.”

TheBlaze journalist soon moved into his politics. According to Leon, Leon didn’t care how fat this guy was. And by the way, maybe it’s a thyroid problem? The self-reflective editor admits that he, too, is not svelte.

“I wanna say this here: I am super libertarian and I don’t judge people for being whatever size they are,” he wrote. “I don’t know this guy’s life. Maybe he has a thyroid problem. It’s none of my business. I’m certainly not small.” (Quick side note: A person’s size comes up pretty regularly in politics. Ex-Republican New Jersey Gov. Chris Christie is a staple fat joke on late-night shows. But he has also made fun of himself by discussing fat jokes with the likes of Bill Maher and David Letterman. During a 2016 presidential debate, President Trump said an anonymous email hacker “could be somebody sitting on their bed that weighs 400 pounds.”) 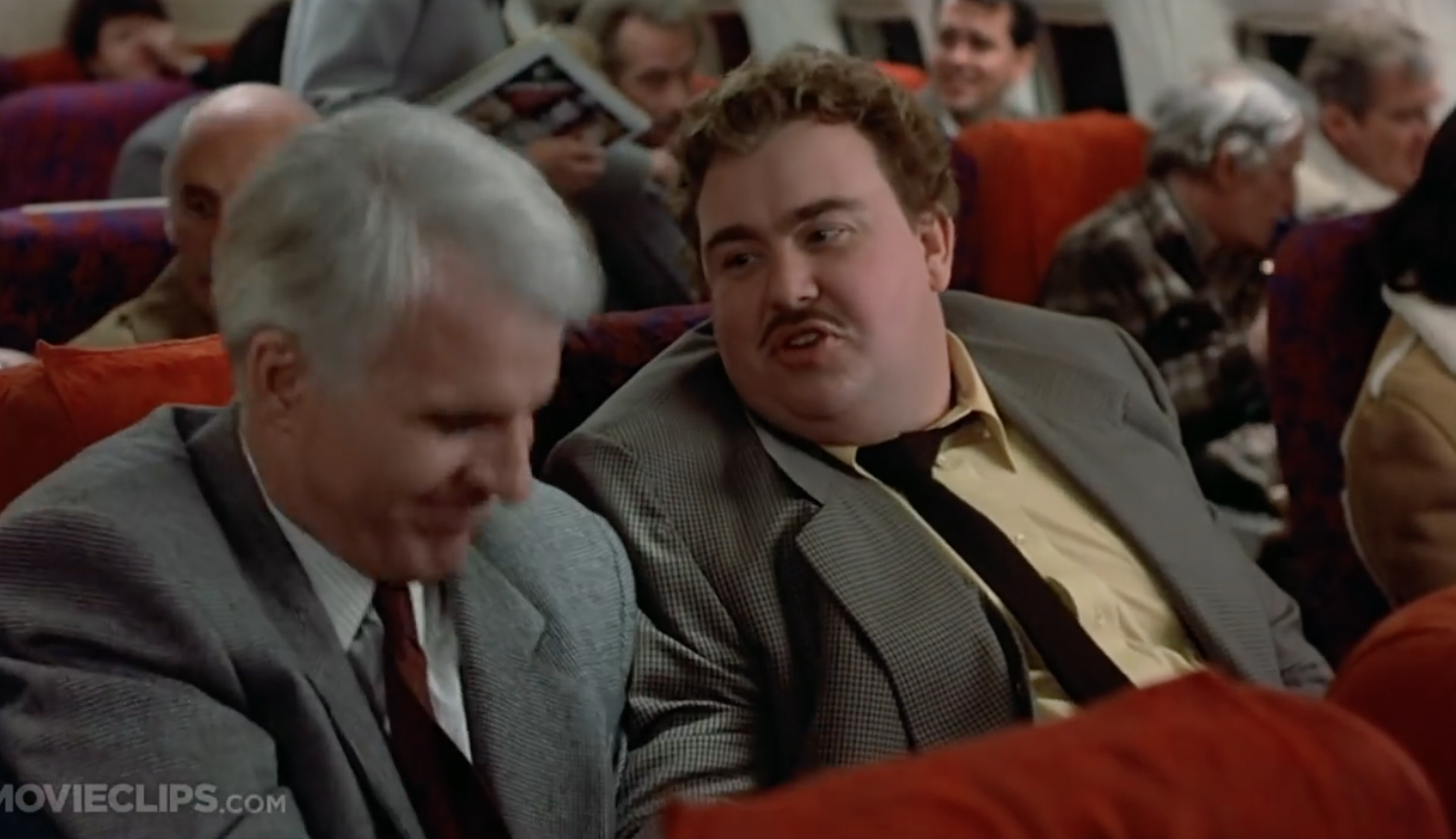 Now, pivoting to American Airlines, Leon places the blame where it belongs.

“It also should have been immediately apparent to anyone with a lick of sense that there was no chance he was going to fit within the horizontal confines of an airplane seat, and that’s the problem,” he continued.

Leon is obviously not a loner in his plight to fix universal travel issues and throw around his journalistic weight to do so.

In the summer of 2017, conservative commentator Ann Coulter complained about Delta. She was on a flight from New York to West Palm Beach and had pre-booked the spacious emergency row to accommodate her 6’0 physique. She tried to switch from the window to the aisle with little time to spare. Coulter’s request was seemingly accepted. Still, the airlines kept her in the window seat. She blasted the airline on social media and even snapped photos of fellow flyers. Coulter’s whining worked. Delta apologized and said it would refund Coulter’s $30 ticket. But the airline also reprimanded her behavior, calling her insults “unacceptable” and “unnecessary.” (RELATED: Coulter Dings Delta For Wrecking American Health Care)

In the fall of 2016, NYT liberal columnist Charles Blow said no one would sit in the empty seat next to him on the Acela because he is black. “Love how subconscious racism works to my advantage on @Amtrak Acela,” he tweeted. “The seat next to me ALWAYS stays empty until ppl have no other options.” (RELATED: NYT’s Charles Blow Cries Racism Because No One Will Sit Next To Him On A Train)

That one really blew. How could he prove that? People on trains don’t tend to care who they’re sitting next to just as long as they don’t stink, take up, ahem, too much room as in Leon’s nightmare scenario, or look creepy. I’m willing to give Blow the benefit of the doubt on all of these fronts.

In what may be my favorite example of a journalist traveling under the influence of douchiness, in August, 2016 The Young Turks‘ Cenk Uygur filmed himself acting like a total asshole in an airport. Gate agents at LAX ultimately threw him off the flight for his cussing out a crew of American Airlines workers. The reason? A four-hour delay between LAX and Miami set Cenk off. (RELATED: Cenk Uygur Wins Contest For World’s Biggest A**hole)

Airlines are increasingly creating “obesity policies,” says a 2017 report on smartertravel.com. The policies can be harsh and swift — if the seat doesn’t fit you must evacuate. If an extension seatbelt doesn’t fit and the armrest cannot be in the down position, the passenger can charged double or booted off the plane.

American Airlines actually has an obesity policy — if you need an extension seatbelt or your body extends more than one inch beyond the “outermost edge of the armrest” you must purchase two seats. Delta’s policy is a little more humane for hefty travelers. They don’t make obese folks buy an extra seat, but if your bulk bleeds into the next seat, you could be asked to move or take a later flight.

Leon is not just a complainer. He has ideas on how to improve the travel experience for those who can fit in one airplane seat and those who clearly can’t.

He reasoned, “If I bring a bag to the gate that is even close to being too big, the gate agents spot it with an eagle eye and force me to put it in the little bin to verify that it isn’t bigger than the little shadow and if it is, I have to check it. …It’s the same damn issue with the seat. I pay hundreds of dollars for a few scant inches of horizontal space and if someone’s size means they will encroach on mine, they should have to pay for another seat so they don’t encroach. End of story.”

But that was not the end. He was just getting warmed up.

“I thought about letting this go but here’s the thing: if some @AmericanAir employee had done their job and told this guy he had to buy two tickets, he would have gotten on social media and kicked up a storm about being body shamed,” he wrote. “And that’s why it didn’t happen.”

Has this happened to Leon before? He doesn’t say, but suggests that it’s a widespread (pun-intended) problem.

“As anyone who flies frequently knows, it’s a problem that’s getting worse and it needs to be dealt with,” he wrote. “And you should take employees completely out of the equation so they don’t get accused of singling anyone out or have complaints about, ‘I DO TOO FIT, HOW DARE YOU.'”

And now for Leon’s idea on how to delicately fix the problem. If you’re overweight, have feelings and an aversion to public humiliation, you may want to stop reading now.

“There’s a VERY simple solution: make one of those bag sizers for people,” he suggested. “Drag a plastic gate that is exactly as wide as the seats on the plane and set it right in front of the jetway. Everyone has to walk through. If you can’t fit without turning sideways, you buy two tickets.”

He compares it to the height requirement to the one at Disney World. But it falls flat. Unless you’re the late Hervé Villechaize (“Tattoo” from Fantasy Island), no one is really offended by height rules at theme parks.

“It’s no different from the signs at the amusement park about people who have to be a certain height to ride a certain ride,” Leon wrote. “Don’t argue with me; argue with the gate. You are physically too large to occupy a single unit of space that is for sale, therefore you must buy another.”

‘Don’t hate me because I’m skinnier than you are!’

“I get that people are gonna complain because no one likes paying extra for anything and will make it into an outrage issue if you do but the rest of us should not have to suffer in silence,” Leon continued. “The space you sell us is small. Let us f***ing have it. That is all that needs to be said.”

Leon says Leon is not out to fat shame the guy, as he’s sure will happen with his thread. His purpose is bigger, to help all of mankind deal with this ever-growing problem of a large man spilling into his seat and causing elbow issues.

Leon says Leon doesn’t care — bash him all you want. But he’s not staying silent any longer.

“I am sure I am gonna be flamed for this thread but I’m beyond the point of caring,” he wrote. “My hope is that I’ll also get some people who agree so the airlines can see that those of us who fit in seats and don’t inconvenience other passengers because we’re cheap matter, too. End.”

All that complaining actually did reach American Airlines.

Your comfort is important to us. We encourage an extra seat be purchased at booking for those needing more space. https://t.co/1QpN7houvw.

His comfort is important to them?! This does not appear to be true. So much for American’s stringent obese passenger policy.

Let’s hope Leon’s next flight is not quite so cozy.