The Trump administration’s 2020 budget proposal is set to help NASA reach the moon and then continue to Mars, according to Space.com.

The agency’s proposed budget received praise on Tuesday from NASA Administrator Jim Bridenstine, who has been working to fulfill President Trump’s Space Policy Directive 1. Signed two years ago, the policy calls for a new trip to the Moon and a first voyage to Mars. (RELATED: President Trump Continues To Make Space A Priority)

“For the first time in over 10 years, we have money in this budget for a return to the moon with humans,” said Bridenstine in a presentation at the Kennedy Space Center. “I’m talking human-rated landers, compatible with Gateway, that can go back and forth to the surface of the moon.”

We are going forward to the Moon with humans! We are expanding our presence in the solar system by building and testing powerful rockets to advance human innovation. Join us in our #Moon2Mars pursuit to live and work far from home: https://t.co/RpayULxdyW pic.twitter.com/UaYZVQREJ3

The aforementioned “Gateway,” also known as the Orbital Platform-Gateway, is a proposed outpost that would orbit the moon and double as a research station and a bridge to the lunar surface.

Having been fully funded in the new budget, the Gateway will add a “power and propulsion element” by 2022 and will also add components allowing humans to stay aboard by 2024, according to NASA’s budget estimates.

“The president has given us Space Policy Directive 1, which says to go back to the moon, and we’re going to do that in short order — maybe even in 2019, but at least by 2020 — with commercial lunar payload services that are going to be funded through the Science Mission Directorate, and all of this is going to be possible because we’re looking at going fast,” said Bridenstine.

The NASA administrator envisions the Gateway to be another broad and international collaboration, similarly to the International Space Station (ISS). Canada became the first partner of the project with a proposed “Canadarm3” robotic arm.

In a visualization of the Gateway, Bridenstine included prospective additions from JAXA, the Japanese space agency, the European Space Agency and the Russian agency Roscosmos. (RELATED: China Announces Launch Of New Space Station That Could Put Them Even Farther Ahead) 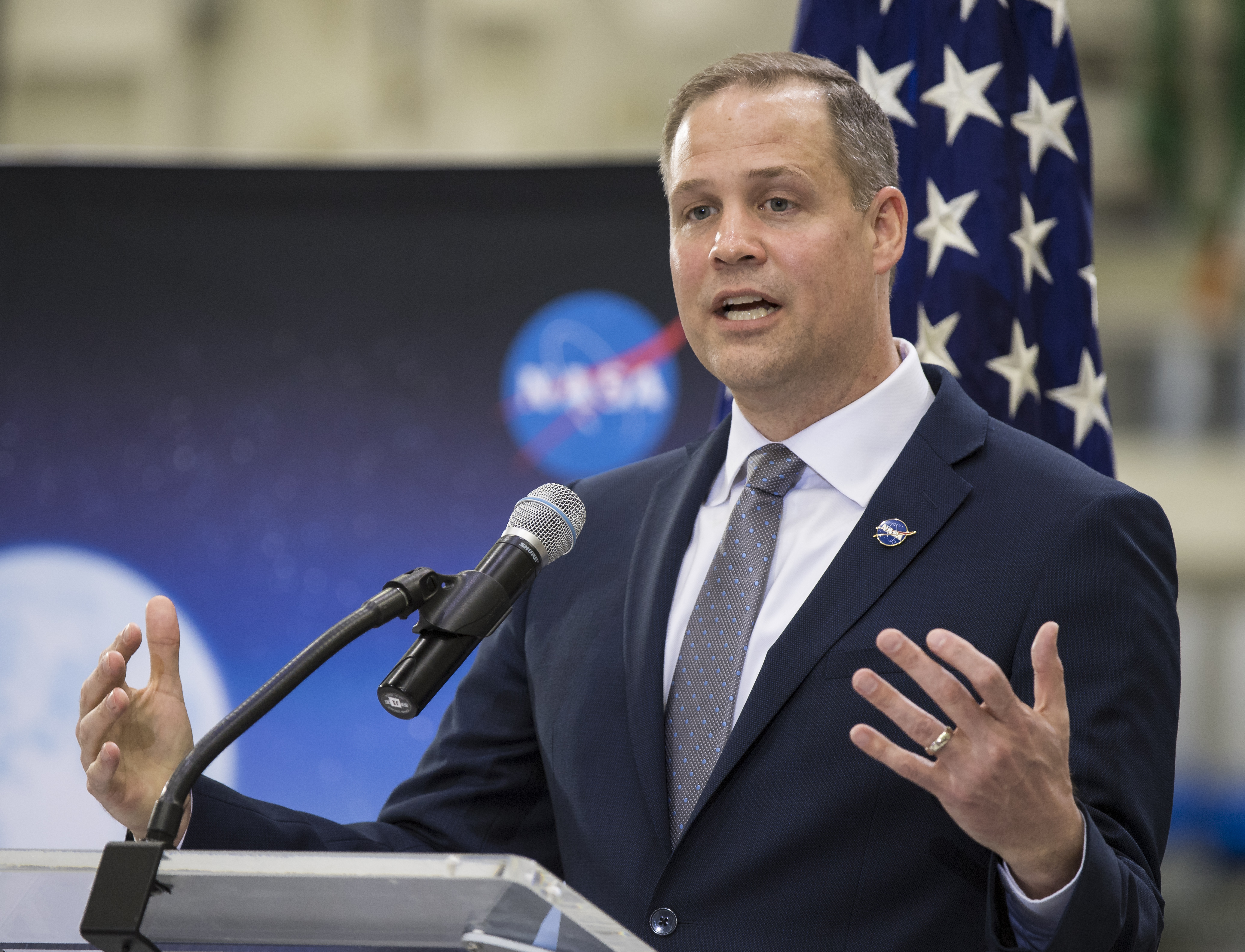 “This is not what it is right now, today, but this is aspirational,” he said. “I can tell you, just this morning I got off the phone with all of our international partners on the ISS and others, and they are very excited about partnering with us on going to the moon.”

The establishment of the Gateway would allow NASA “to utilize the resources of the moon,” such as the “hundreds of millions of tons of water-ice,” that can be used for the larger mission of going to Mars.

“Water-ice is air to breathe, it’s water to drink … But it’s about more than just those things,” said Bridenstine. “The last part of his first space policy directive says to take these capabilities for an eventual mission to Mars.” 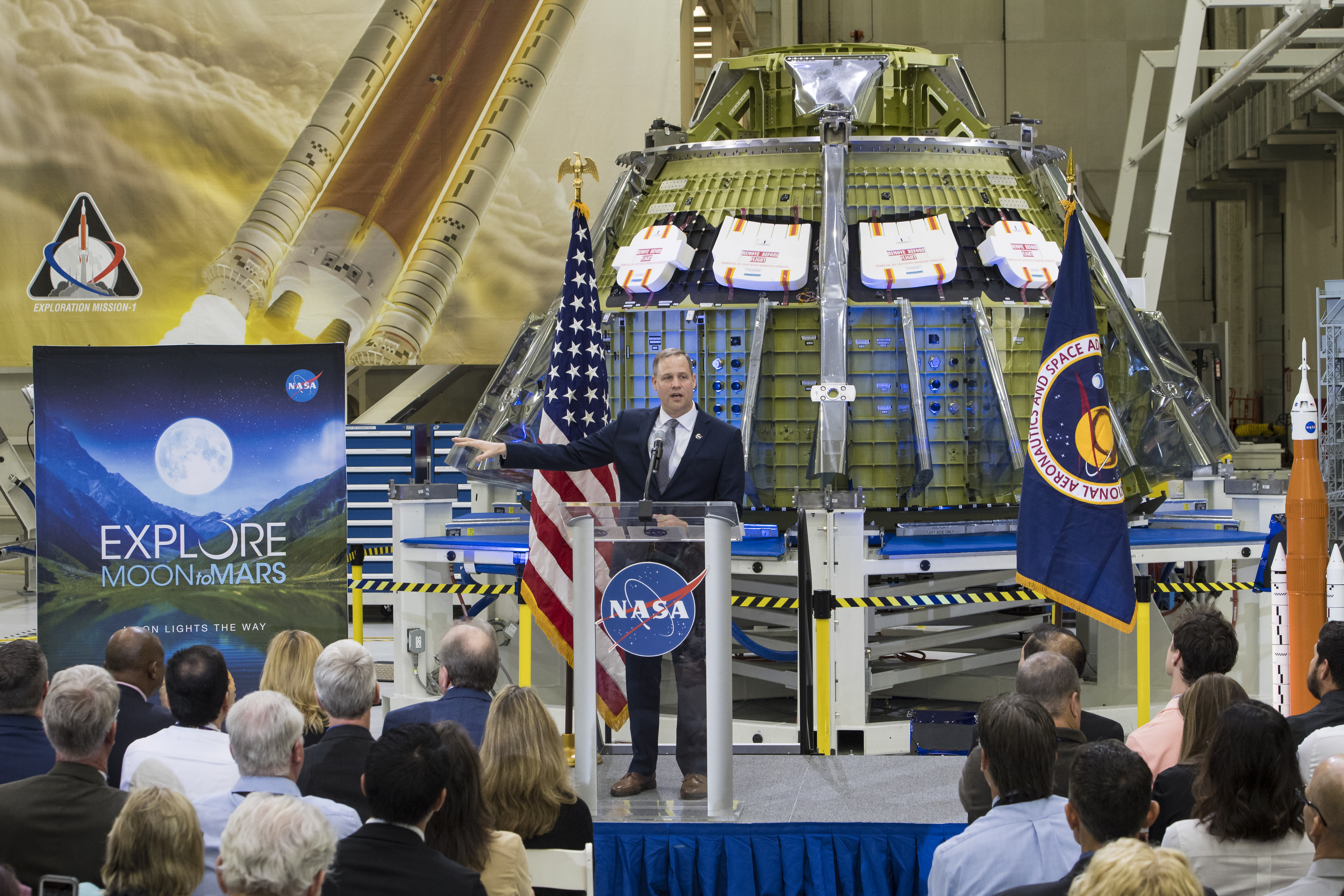 The Mars 2020 mission and a sample-return mission, that could launch as soon as 2026, are both fully funded under the new proposal. Additionally, the James Webb Space Telescope, known as the successor to the Hubble Telescope, also received full funding under the budget proposal.  (RELATED: There Is A Strange, ‘Plume-Like’ Cloud Hanging Over Mars)

“The moon is the proving ground; Mars is the horizon goal,” Bridenstine said. “And both require an all-of-the-above approach.”