No one really knows what hours Peter Hasson works at the conservative nonprofit media outlet The Daily Caller News Foundation. His flexible schedule awards him the ability to stay up into the wee hours of the night sifting through the old blog posts of Media Matters President Angelo Carusone.

And he’s read a lot of Carusone’s blogs.

Carusone was elevated to president of Media Matters in December of 2016 after working at the left-wing media watchdog for approximately six years, according to his LinkedIn page. Under Carusone’s watch, Media Matters has been responsible for multiple boycotts of Fox News advertisers and protests against some of the network’s hosts.

In March, Media Matters published old shock jock radio hits between 2006 and 2011 featuring Fox News host and Daily Caller co-founder Tucker Carlson, sparking calls for Carlson to be fired from his primetime TV spot. However, it was soon revealed that Carusone wasn’t so squeaky clean himself.

After stumbling across a Daily Caller post from 2014 detailing some nasty things Carusone said in his personal blog, Hasson posited that there was more to dig up. Hasson’s gamble paid off, as he uncovered a number of blog posts that could be characterized as racist and anti-Semitic from around the same time as Carlson’s radio interviews.

In one post, Carusone complains that “trannies” are described as “attractive” and warns people to stay away from “tranny bars,” while in another he downplays the physical and sexual abuse of young girls in Japan, writing “lighten up, Japs.” Carusone talks about “Jewish gold” in another post and says he thinks his boyfriend is adorable “despite his jewry.” (RELATED” Media Matters President Wrote Blog Posts About ‘Japs,’ Jewry,’ And ‘Trannies’)

In response, Carusone painted himself as a victim and blamed The Daily Caller, a “bad faith actor,” for coming after him every time Media Matters publishes information on a conservative.

In reality, credit for the publication of the old blog posts goes to Hasson: a 23-year-old who lives in Fort Worth with one roommate, who is much better looking than he is.

Hasson owns an overweight golden Labrador, who currently lives with his parents. One of his neighbors has a rooster, which Hasson plans to make disappear at some point.

“This thing crows all day long,” he said of the rooster. “It almost crows as loud as Jim Acosta does when he spots a mirror.”

Here is a photo of Hasson with his dog to show just how non-threatening he is: 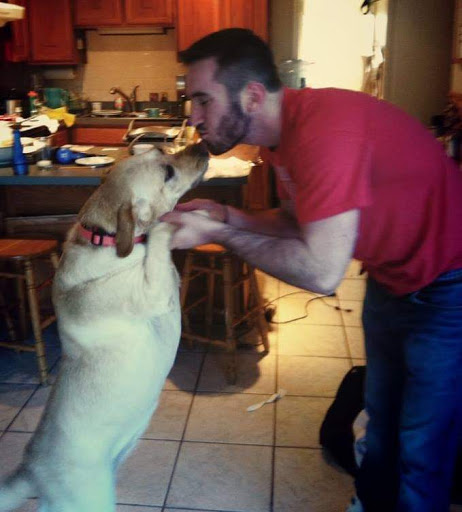 Another photo of the dog for good measure: 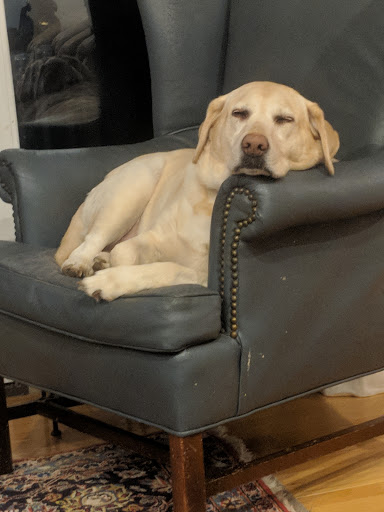 “I’m not some power-wielding theocrat,” Hasson said. “I’m just some kid who spent too much time playing Backyard Baseball growing up, which is a valuable skill for journalists to have.”

Carusone has been downplaying the seriousness of his old blogs, insisting that they are meant to be a “parody” of a “bigoted … right-winger.”

“It’s true: I wrote some gross things on my blog while I was in college. A few posts parodying living my life as if I were a self-loathing, bigoted Limbaugh right-winger,” Carusone claimed in a statement to The Washington Post. “And every time Media Matters takes some meaningful action, some awful people bring it up to try to stop us. And every time, I will acknowledge that the writing was gross and apologize because the context only explains; it doesn’t excuse.”

Carusone also partially blames his decision to write the blogs on the fact that he was a “fat, bullied gay kid” and wanted to start “fighting back” by making fun of his bullies.

However, as Hasson points out in a follow-up article, Carusone also used the blog to promote left-wing ideologies and attack Republicans, potentially suggesting it wasn’t the “parody” Carusone claimed.

“Archives of the blog maintained by the Internet Archive’s Wayback Machine seem to contradict that explanation,” Hasson writes. “The archives show that, through his blog, Carusone espoused left-wing political positions, promoted former Vice President Al Gore as a presidential candidate and attacked Republicans around the same time he authored the inflammatory posts.”

The Daily Caller News Foundation is a 501(c)(3) non-profit that provides original reporting for the public benefit and trains young journalists through a journalism fellowship program.

“Editorial independence is central to TheDCNF’s mission of providing honest, balanced and ethical journalism,” the DCNF’s website states. “All editorial decisions are made exclusively by editors, with no direction from donors. A donation does not provide for any specific reporting, editorial review, or preview of unpublished stories.”

Chris Bedford, the editor in chief of TheDCNF, spoke highly of his young reporter and his work in uncovering Carusone’s blogs.

“Pete is one of our best and brightest young reporters. Through weekly blood transfusions, his enthusiasm and that of his colleagues sustains my 1,200-year-old-body. Without them, I would be forced to cede to death and the hell that surely follows,” Bedford declared.

Pitch To Eli Rosenberg of The Washington Post (Screenshot/Amber Athey)

Rosenberg did not respond to the pitch.