Homeland Security Secretary Kirstjen Nielsen pushed back against claims that the U.S.-Mexico border crisis is “manufactured” and warned that crossings are on track to reach levels not seen in over 10 years.

“I want to cut through the politics today to tell you loud and clear: There is no ‘manufactured’ crisis at our southern border. There is a real-life humanitarian and security catastrophe,” Nielsen said Monday at George Washington University during her annual State of Homeland Security address. “The situation at our southern border has gone from a crisis, to a national emergency, to a near system-wide meltdown.”

The Department of Homeland Security, Nielsen stated, is on track to apprehend nearly 100,000 migrants by the end of March as they attempt to illegally cross the southern border — the most apprehensions since March 2007.

The huge increase in migrant apprehensions for this month follows a steady pattern. Immigration enforcement officials arrested about 75,000 foreign nationals in February and apprehended approximately 50,000 to 60,000 in the end of 2018. The Border Patrol captured a total of 361,000 people in fiscal year 2018.

“The system is breaking, and our communities, our law enforcement personnel, and the migrants themselves are paying the price,” Nielsen continued in her speech, which took place in Washington, D.C.

The secretary’s comments come as numerous Democratic politicians and other critics of President Donald Trump have accused him of “manufacturing” a crisis out of the U.S.-Mexico border.

Newly elected Democratic Govs. Tony Evers of Wisconsin, Gavin Newsom of California and Lujan Grisham of New Mexico have announced a withdrawal of their National Guard troops from the southern border. All three governors have criticized the president’s claims that the southern border is undergoing a crisis. 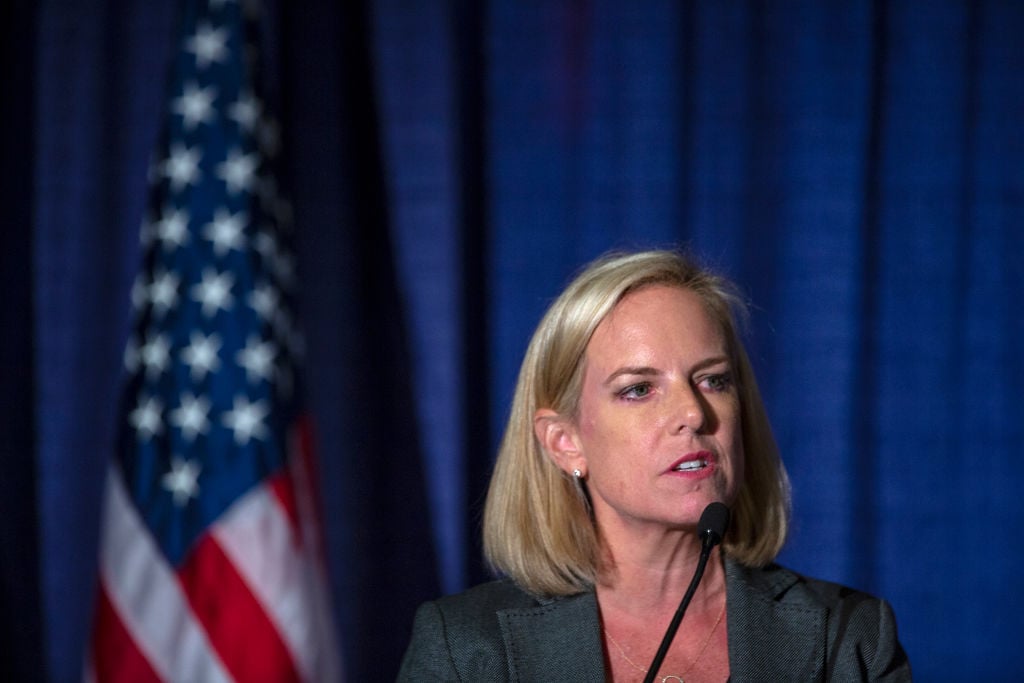 Grisham framed the president’s emergency declaration as “fear mongering,” Newsom called it “political theatre” and a coalition of former security officials said it was not “remotely” justifiable.

Members of the Trump administration have pushed back against this narrative.

U.S. Border Patrol Chief Carla Provost explained to a House committee in February that while the border crossings are not at the levels seen in the 1990s and early 2000s, the huge increase in Central American migrants — who are not Canadian or Mexican — and the high number of unaccompanied children have stretched her agency thin. Provost said the situation constitutes both a border and humanitarian crisis. (RELATED: The Amount Of Meth Pouring Across The US Southern Border Is Skyrocketing)

Trump himself has hit back at the “manufactured” framing, calling it a soundbite.

“Well, you know, I watched last night. I saw on your show last night, actually, where you had anchor after anchor using the exact same word. It’s manufactured. Manufactured,” Trump said to Fox News host Sean Hannity in January. “No. It’s a manufactured sound bite. It’s just a soundbite.”