Democratic presidential candidate Beto O’Rourke has fascinated the public with his love of standing on restaurant counters, but little attention has been paid to the unsung heroes of O’Rourke’s campaign — the baristas and bartenders forced to wipe down the counters after the former congressman’s departure.

O’Rourke, who has kicked off his campaign by visiting various small businesses in Iowa, Wisconsin and Michigan, has generated jokes and memes about his constant need to address crowds from atop an elevated surface. Politicos and verified Twitter users have opined on the cleanliness — or lack thereof — of O’Rourke’s dirty shoes trampling the same surface used to serve customers. (RELATED: On The Road Again — Beto Takes Road Trip To Meet America)

Can Beto not afford a step stool? It seems there’s not a lunch counter in Iowa that’s safe from his nasty shoes. https://t.co/6bizt76yrv

“People from cultures where shoes are considered very dirty and not worthy of being in the house get grossed out when politicians walk all over counters,” journalist Yashar Ali tweeted.

People from cultures where shoes are considered very dirty and not worthy of being in the house get grossed out when politicians walk all over counters.

beto campaign: “everyone’s talking about it so it worked.”

no, this is stupid. it’s dumb, please stop doing this. your feet are on the counter. gross. also, you are already very tall. pic.twitter.com/GdiyBs1gRT

This woman is definitely asking Beto why he’s up on the damn counter with his shoes on. https://t.co/aly8fNHXrV

Dan O’Sullivan, who has written for Vice and Rolling Stone, expressed sympathy for the employees who have to “disinfect the counter after Beto hops his stupid horse body up on top of it.”

I don’t care if this sounds petty, but as someone who has had a lot of shitty service jobs, some poor bastard has to fucking disinfect the counter after Beto hops his stupid horse body up on top of it

Employees at the coffee shops and bars visited by O’Rourke on the campaign trail did have to wipe down the counters after the candidate’s countertop speeches, according to four people who spoke to The Daily Caller.

Suann asserted that “of course” an employee cleaned the counter, adding that “in [O’Rourke’s] defense, it was very crowded.”

Beto from the countertop at the Beancounter in Burlington, Iowa. pic.twitter.com/oyxKDPvU0B

An unnamed employee who answered the phone at Central Park Coffee in Mt. Pleasant, Iowa, similarly said “of course” when asked if the counters were cleaned off after O’Rourke’s visit on Friday but declined to comment further about the politician’s visit. 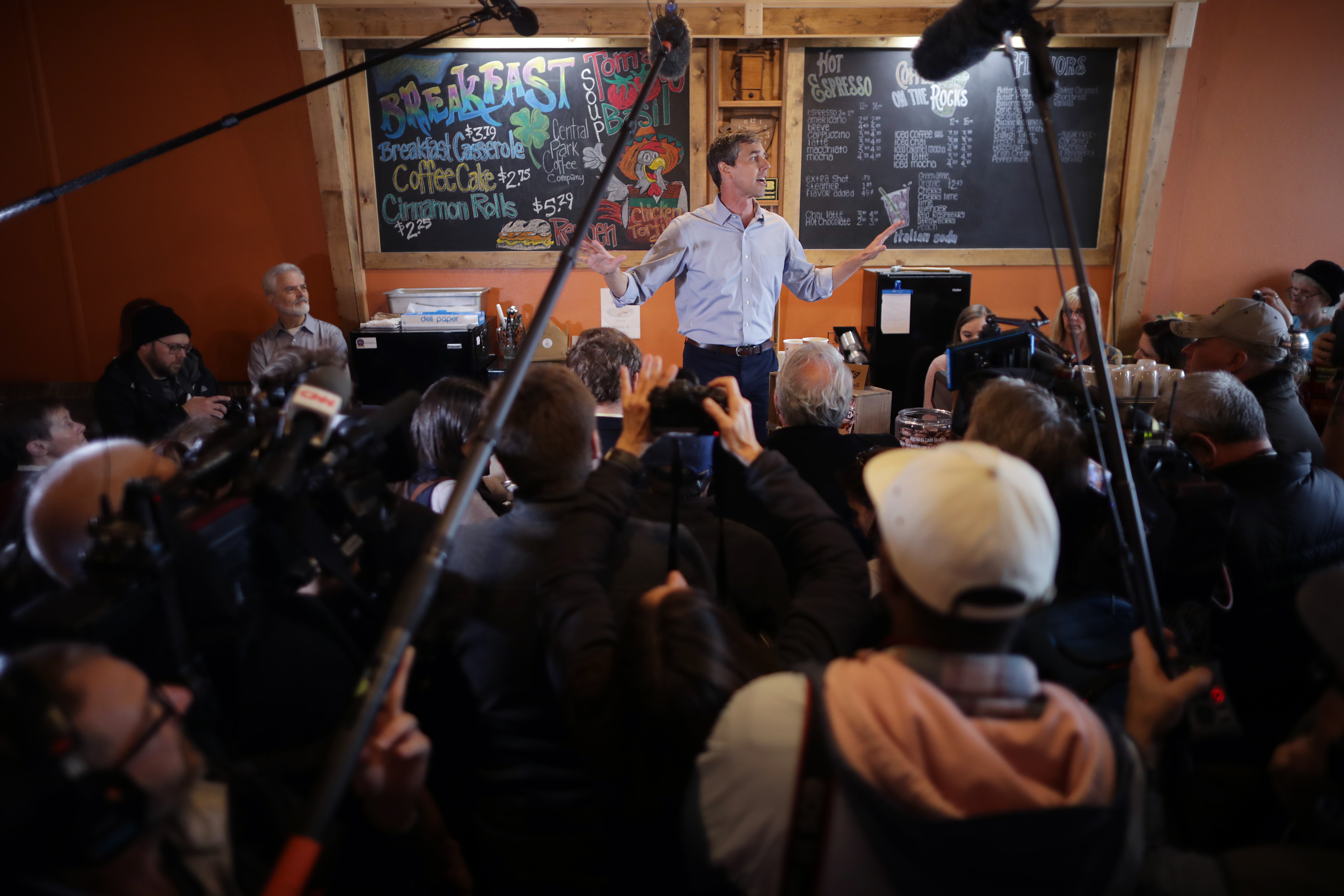 MOUNT PLEASANT, IOWA – MARCH 15: Democratic presidential candidate Beto O’Rourke stands on a counter top as he talks with voters during his second day of campaigning for the 2020 nomination at Central Park Coffee Company March 15, 2019 in Mount Pleasant, Iowa. (Photo by Chip Somodevilla/Getty Images)

O’Rourke made another stop in Iowa to the Sing-A-Long Bar and Grill, where he ditched the coffee counter for a spot next to the register by the bar. Annette from Sing-A-Long told the Caller that they offered O’Rourke a step stool to ease his climb to the counter, which an employee later cleaned with sanitizer.

“We brought out a step stool to make sure he was safe,” she explained. 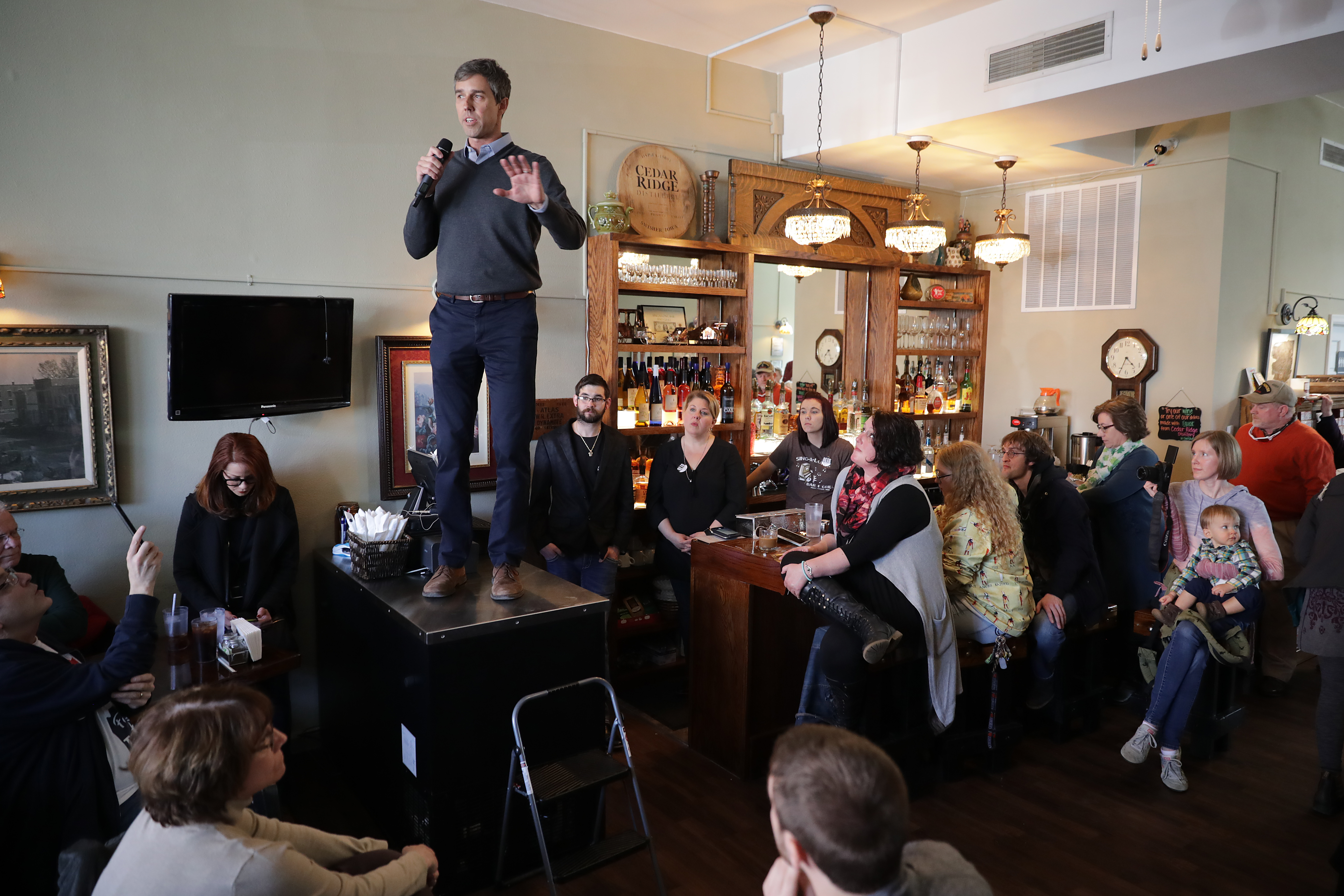 An unnamed employee at Cargo Coffee in Madison, Wisconsin, explained that normally employees at the shop would use “a sanitizer that is still safe for humans to ingest” on dirty countertops, but they took extra steps to ensure cleanliness after O’Rourke’s Sunday visit.

Photos only show O’Rourke standing on a chair at Cargo Coffee, but the employee said O’Rourke stood on the counter as well.

“Yes, we made sure the counter was clean,” she told the Caller. “This time, we used bleach because his feet were on it.”

.@BetoORourke takes the stage inside Cargo Coffee. Says this is “our defining moment of truth.” Calls for lifting up one another and bringing together a divided country. pic.twitter.com/Qb87tmbFPy

Interviews with Suann and Annette revealed that O’Rourke does have at least one healthy habit: asking for permission.

“The crowd was so deep that no one could see him,” Suann said. “His staffer asked if he could [get up on the counter].”

Baristas from other establishments told The Daily Beast that they would prefer O’Rourke stay off their counters if he happens to visit, noting the potential sanitary and safety issues.

“I would understand standing on the counter because the crowd was so big, although organizing it would be better. But he’s kneeled down. It seems like a photo op that wasn’t necessary. His feet are right by the cups,” Josh Wilson, owner of Cohesive Coffee in Greenville, South Carolina, said.

Connor Finnegan, who manages a coffee shop in Brooklyn, New York, said he would not allow O’Rourke to stand on his counter.

“He can be heard and seen perfectly well standing on the ground,” Finnegan said.