Kevin Kelly has a knack for cultivating the sweet spot in America’s fine shotgun market. His collection of bespoke Plantation side by sides and over/unders for the field are built to his exact specifications by family-owned Fratelli Poli Armi in Gardone Val Trompia, Italy – replete with the hand-finishing you’d expect from an $80,000 English Best, but starting at $8,995.

As the owner of Kevin’s Fine Outdoor Gear & Apparel in historic downtown Thomasville, Georgia, with its upstairs gunroom legendary for a breathtaking inventory of highly desirable field guns, Mr. Kelly has for the first time turned his attention to the clays sports. His beautiful Kevin’s Plantation Sporters start at just under $10,000. And for that price you’ll get a fitted 12 gauge or 20 gauge also hand finished by the magnificent Poli brothers.

“The Poli guys, their guns are all one-offs,” said Mr. Kelly. 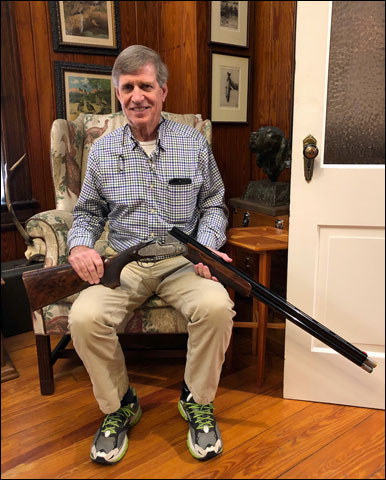 We had visited Fratelli Poli Armi in March 2017. Virtually all of Poli’s output is dedicated to the Kevin’s Plantation Series. And if you call on their shop in Brescia you’ll probably be just as surprised to see that the place is a time capsule from the 1970s. As second-generation gunmakers, brothers Antonio and Tiziano, along with a few craftsmen, meticulously hand-finish each of the Kevin’s guns – the men working 12 hours each day at their seasoned work benches among the bins and shelves of shotgun components. Want to see the real-world, old-school gunmaking? Go to via Giacomo Matteotti, 163 in Gardone. 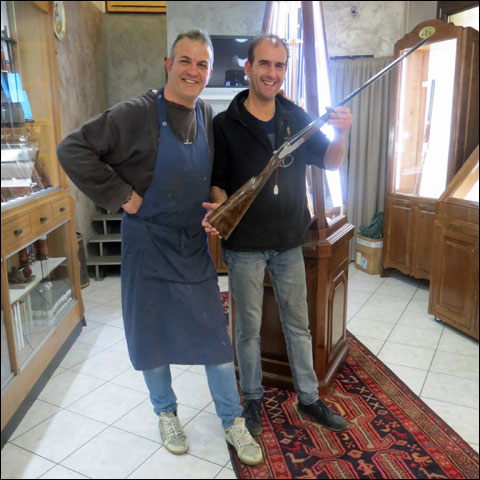 Antonio (left) and Tiziano Poli in their workshop in Brescia, Italy.

Poli sources its barrels, triggers and receivers from the same top local suppliers that equip the likes of Perazzi, Beretta, Caesar Guerini and Rizzini. The brothers apply 20-30 coats per day of the family secret recipe of Tru-Oil, varnishes and other ingredients to the Italian walnut that, in the roughing stage, is shaped and inletted with a hammer and chisel. It will take two-three months for the Poli brothers to finish a single stock including the hand checkering (that they also apply to the forend). 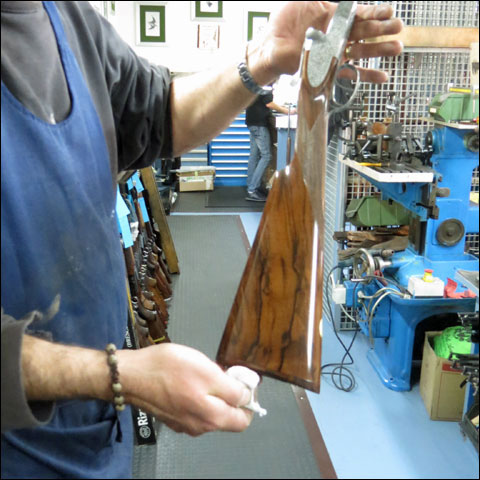 Antonio Poli shows the stock of a Kevin’s Plantation shotgun in the process of being hand-oiled.

In an incredible demonstration of craftsmanship, the barrel is sooted with candle smoke. By repeatedly opening and closing the shotgun, the soot leaves an impression on the high points of the breach face that the brothers continue filing until a perfect fit is achieved.

We were actually able to shoot two versions of the Kevin’s Plantation Sporter – a 12 gauge and a 20 gauge. The 12-gauge was optioned with exhibition-grade Italian walnut at $2,000 and the $400 adjustable comb.

If you’re familiar with the Kevin’s Plantation field guns, it’s immediately apparent that the Sporter shares their DNA.

For the Sporter, Mr. Kelly took to the drawing boards in early 2017 with production beginning in Italy that June. “We’ve been in the field gun business all our lives,” he explained. “With the Sporter we had to get different barrels, ribs and a heavier action. We made it heavier than our field guns so there’s no recoil.”

The 12-gauge Kevin’s Plantation Sporter weighed 7¾ pounds with the 30-inch barrels, while the 20 gauge, also with 30-inch barrels, tipped the scales at 6¾ pounds – certainly in the realm of other premium clays guns. 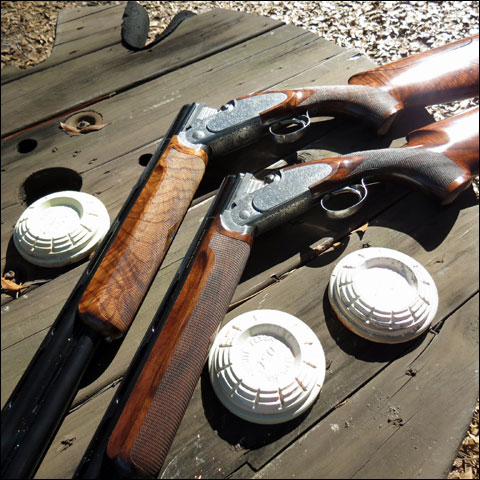 Kevin’s Plantation Sporters can be custom ordered with just about any length barrel and even in multi-barrel sets. Your order sheet will naturally change the final weight a bit, but our guns represented the typical configuration.

Mr. Kelly sent us off with the guns in a Kevin’s Driven Bird Double Gunbag. Twin hand-crushed, saddle-leather cases are buckled together into a single carry. Lined with plush sheepskin wool, the gunbag was priced at $1,499 (In their case the Sporters looked like the perfect husband-and-wife pair.) Loaded up, we drove to Southwind Sporting Clays in nearby Quitman, Georgia.

At Southwind, initial impressions of the Kevin’s Plantation Sporters looked good. Unlike many new shotguns that are difficult to open, these Sporters opened effortlessly to reveal the jeweled monobloc and underlug lock.

First up was the 20-gauge Kevin’s Plantation Sporter. It did not have the adjustable comb or a mid-bead and the checkered butt continued the field style cues. At station one, the five-pound trigger proved responsive and smooth on the pair of high incomers – the comfortable palm swell providing incremental control. The ejectors were well-timed and strong.

As we would discover after several stations, the 20-gauge felt well-balanced and nimble. The 30-inch barrels worked their magic as swing dynamics were smooth and disciplined rather than whippy. Once in the shoulder pocket, the sight picture delivered a clear point of impact that was slightly higher than flat.

Field guns typically don’t have palm swells, but if you’re looking for one the Kevin’s Plantation Sporter would be a natural on upland game. In fact, after shooting the 20 gauge you develop the impression that it would make a lovely field/sporter by marrying the characteristics of both. I shoot a German 20-gauge for upland and sometimes I wanted a palm swell for supplemental control during a crazy flush.

The 12-gauge Kevin’s Plantation Sporter, though, would become our favorite of the two shotguns. At 7¾ pounds and a balance point slightly forward of the trunnions, it conveyed the handling chops of a world-class clays crusher.

Lift the shotgun from the rack and it felt a bit heavier than its actual weight, but once you get it into the stand, take the ready position and call for a target it felt lighter throughout the shot sequence. The handling would be best described as patient, enabling and convincing. You never thought for a moment that anything about the 12 gauge would thwart you from smashing the target. The word that came to mind was “competent.”

My mantra for sporting clays is “see it, shoot it,” and as part of that I tend to spot shoot. Personally, that means I need utmost confidence that the shotgun will instinctively go where I expect it be with little time to think about the break point. Gaining trust in a new gun, therefore, happens quickly – or not. Yes, I missed targets but I never could blame the 12-gauge Kevin’s Plantation Sporter.

The five-pound trigger on the 12-gauge Kevin’s Plantation Sporter is more than the 3½ pounds you’ll find on a Krieghoff K-80 or Blaser F3. Yet it delivered a fluid interface without any creep or jerkiness: See it, shoot it, easy as pie.

When Mr. Kelly said that the shotgun’s weight was calculated to reduce recoil, what’s even more remarkable is that our version had the checkered butt, and despite that, felt recoil was negligible even when shooting 1⅛-ounce shells traveling at 1150 feet per second. By the end of the sporting clays course I realized that the 12-gauge Kevin’s Plantation Sporter proved itself as a very comfortable shoot.

The Kevin’s Plantation Sporter, like it’s Plantation siblings for the field, is a high-quality value proposition. Ask yourself: Where else can I get a gorgeous bespoke clays gun for under $10,000?

1
Here's How Dem Candidates Who Supported Ocasio-Cortez's Green New Deal Are Faring In The Primaries
Elections
2
'It's Over': Atlanta Mayor Says Protesters Should Clear Out After 8-Year-Old Girl Shot And Killed
US
3
Farrakhan Accuses Fauci And Bill Gates Of Plotting To 'Depopulate The Earth' With Coronavirus Vaccine
US
4
Sen. Tammy Duckworth: 'We Should Listen To The Argument' For Removing George Washington Statues
Media
5
Leo Terrell: ‘Embarrassed To Be A Democrat’ After DNC Plays ‘Race Card’ With Mount Rushmore
Politics