The Foundation for Accountability and Civic Trust (FACT) — a government watchdog group based in Washington, D.C. — said Fair Fight is working to promote Abrams’ political career in lieu of promoting voting rights, which it said would be in violation of its 501(c)(4) tax-exempt status.

Originally founded in 2014 as Voter Access Institute, Abrams changed the name to Fair Fight Action in December 2018. Fair Fight’s stated goal is the promotion of voter rights, and it advocates for a number of different election reforms. However, under its 501(c)(4) tax-exempt status, it cannot provide “support for an individual’s personal political activities.”

In its complaint to the IRS, FACT argues Abrams used Fair Fight to promote her own political ambitions.

The complaint says since Abrams lost her gubernatorial election, Fair Fight has helped pay for Abrams’ statewide speaking tour, Facebook ads that attacked Georgia GOP Gov. Brian Kemp and promoted herself, a Super Bowl ad, hosted watch parties for supporters to “cheer” for Abrams as she gave the Democratic response to the State of the Union, and accepted donations from a “Stacey Abrams Fundraiser.”

These activities have gone on as Abrams openly mulled a 2020 Senate candidacy and even a presidential bid. Former Vice President Joe Biden is reportedly considering Abrams as his running mate, should he run and win the Democratic presidential nomination. Any political run for office by Abrams, experts argue, would elevate concerns over Fair Fight’s activities.

“It is extremely concerning that Stacey Abrams appears to be abusing our nation’s tax laws for her personal political gain,” Kendra Arnold, the executive director of FACT, said in a statement Tuesday. “The IRS has on numerous occasions ruled against groups trying to advance personal interests, and it is imperative the IRS investigate Fair Fight Action’s conduct.”

Abrams’ team hit back against the complaint.

“We know the playbook for Trump and his allies. They’re going to do whatever it takes to undermine our movement to ensure free and fair elections. We have to fight back now,” said Lauren Groh-Wargo — Abrams’ 2018 campaign manager who runs Fair Fight — in an email to supporters.

Groh-Wargo called the complaint “baseless” and said her group was not promoting Abrams. 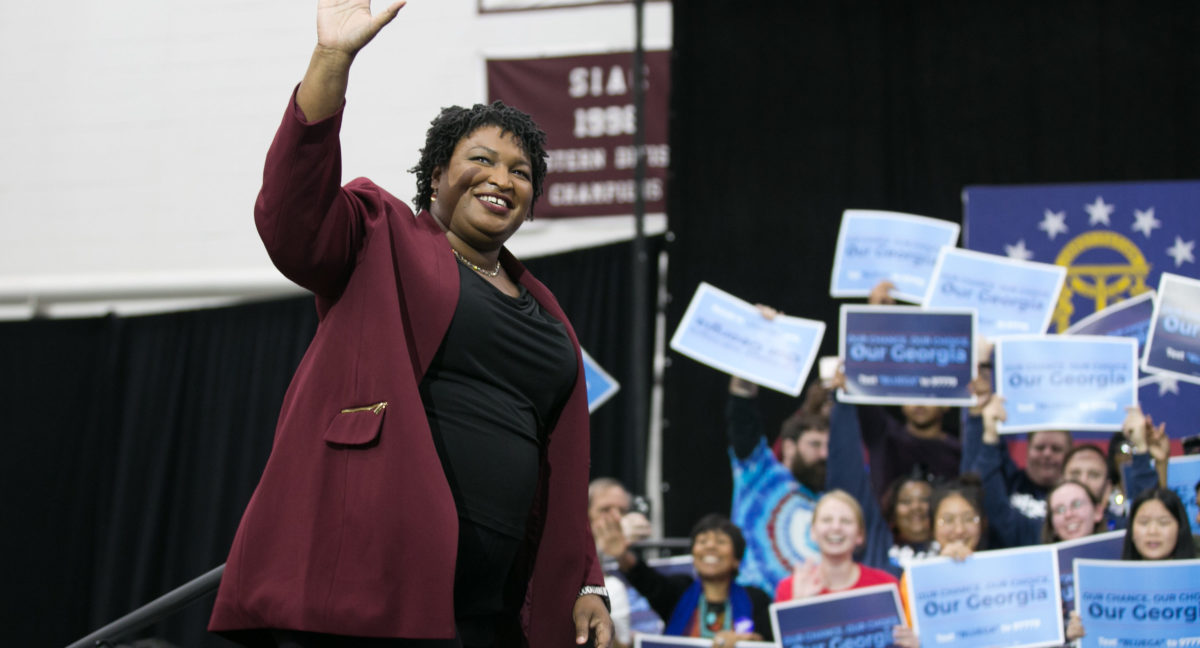 ATLANTA, GA – NOVEMBER 02: Georgia Democratic Gubernatorial candidate Stacey Abrams walks on stage and waves at the audience for a campaign rally at Morehouse College with Former US President Barack Obama on November 2, 2018 in Atlanta, Georgia. Obama spoke in Atlanta to endorse Abrams and encourage Georgians to vote. (Photo by Jessica McGowan/Getty Images)

FACT pushed back against the accusation that it is a partisan organization, pointing out that it filed similar complaints with Republicans as well.

“Whoever we identify with questionable behavior, they fail to respond to the actual legitimacy of the complaint and just try to characterize us in one way or another,” Arnold told The Daily Caller News Foundation. “We have filed complaints against every type of candidate and elected official. We do not consider party affiliation.” (RELATED: House Oversight Committee Opens Investigation Into Alleged Georgia Voter Suppression)

This is not the first time a nonprofit led by Abrams received negative headlines.

Third Sector Development, a nonprofit launched by Abrams that focuses on registering black voters, has been hit with seven different tax liens over the past few years for unpaid employment contributions. Georgia state regulators filed three tax liens against the group in the past year, and the Georgia Department of Labor filed four tax liens between 2014 and 2016. Abrams blamed the issues on clerical errors.