What These Daily Beast Journalists REALLY Wanted To Call Their Book

“I want to be very clear about this: I wanted the title of my and @lachlan’s book to be ‘Another Shitstorm in Fucktown,’ but no one with any authority over that would let me.” — Asawin Suebsaeng, reporter, The Daily Beast.

According to Politico‘s Michael Calderone, Suebsaeng is teaming up with fellow reporter Lachlan Markay to write this: Sinking in the Swamp: How Trump’s Minions and Misfits Poisoned Washington. Viking has signed onto the project. Read more here.

WTF is going on with Clarence Thomas?

“SPOTTED : Clarence Thomas leaving lunch at the Capital Grille. He was greeted by a TMZ reporter, who yelled ‘Justice! Justice! Who do you like in March Madness?’ He laughed and said, ‘I like you.'” — Politico Playbook Thursday.

“Jeanine is the best. We miss her honest and common-sense analysis.” — Rudy Guiliani, Trump’s attorney.

Meghan McCain jokes about voting for her father in 2020

“At this point, I may end up voting for the ghost of my father, who is so relevant right now.” — Meghan McCain on ABC’s “The View” Friday when discussing who she may vote for in 2020. One thing is for certain: She says she will never vote for Trump.

President Trump has been beating up on the late Sen. John McCain (R-Ariz.) all week long. (RELATED: Trump Doubles Down On His McCain Tweets)

The National Cathedral has denied needing Trump’s permission to hold the service there.

“Yet another lie, apart from the disgrace of his attacks the late Sen. McCain. Again, his compulsion to lie knows no bounds. His mendacity is unprecedented for a public official. He debases his office, and all around him, especially those who shamelessly defend him.” — George Conway, husband to Trump Counselor Kellyanne Conway, on Thursday night. (RELATED: Kellyanne Conway Picks Trump Over Hubby)

Journalists who are becoming ‘Buttigeeks’

“I’ll be honest: I wasn’t expecting to be so impressed, or even like!, Mayor @PeteButtigieg, but after my conversation with him for the latest #Deconstructed, I was. Big time. Other 2020 Democratic presidential candidates, beware!” —Mehdi Hasan, columnist, The Intercept.

“Rise of the #Buttigeeks,” Beutler tweeted on March 12.

“Making more Buttigeeks at ever stop,” Buetler tweeted on March 7.

With one more “t,” Beutler could be in the ‘Butt’ family.

Journo annoyed by mispronunciation of her name

“I SWEAR TO GOODNESS IF ONE OF YOU MOTHERF***ERS MISPRONOUNCES MY SIMPLE SICILIAN LAST NAME ONE MORE TIME” — Amanda Prestigiacomo, writer, The Daily Wire.

Atlantic reporter opines on the Conway situation … “The Conway marriage is a perfect metaphor for the current Republican Party, split between those who see Trump as an opportunity & those who see him as a horror—and yet, somehow, they stay together.” — Molly Ball, The Atlantic.

Commentary‘s John Podhoretz took himself off Twitter this week after he said he wanted a neutron bomb to hit J-Schools. This was in response to ex-Teen Voguer Lauren Duca teaching a summer journalism class at NYU called “The Feminist.” Twitter’s unofficial social director Yashar Ali, a writer for HuffPost and New York Mag, insists Podhoretz, a familiar face on MSNBC’s Morning Joe, will return:”John Podhoretz will be back. That I can promise you. It may take a decade, but he’ll be back. (RELATED: Lauren Duca’s NYU Syllabus Is Really Bad) 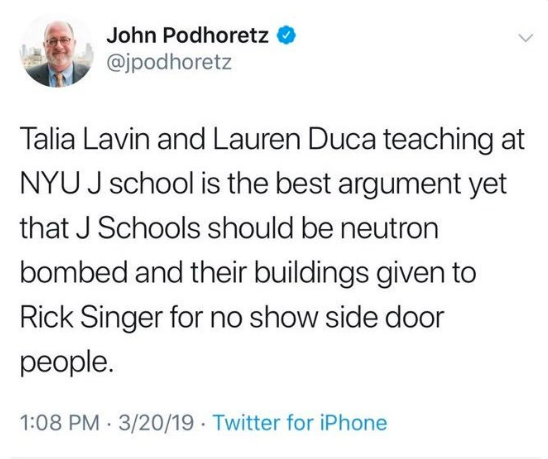 MOO:Ellen Degeneres’s EP is on a mission against Devin Nunes

Rep. Nunes (R-Calif.) is suing Twitter for a sassy cow parody account that he says defamed him.