The Job Creators Network created another billboard in Time Square that appears to ding the New York Democrat’s stalled effort to push an ambitious climate proposal through Congress. The group, which is tied to the conservative Mercer Family Foundation, suggested the GND’s cost might be one of the reasons why it is stalling.

“Hey AOC: Got the Green Raw Deal Blues After that Senate Vote? Maybe No One Liked the $93,000,000,000,000 Price Tag,” the billboard states. The billboard references a February report from American Action Forum suggesting the GND could cost up to $93 trillion over a decade. (RELATED: REPORT: Green New Deal Could Cost Every US Household $65,000 A Year)

“Not a single Senator voted for the Green Raw Deal, maybe because of its $93 trillion price tag,” Alfredo Ortiz, JCN President and CEO, said in a press statement Tuesday. “Nearly every Senate Democrat voted present because they know i’’s a disaster but they’re afraid of their base. Thankfully, most Americans support capitalism, reject socialism, and have no interest in becoming the next Venezuela.”

Republicans defeated the GND 57 to 0 as Democratic lawmakers derided the vote as a political gesture meant to rile up conservatives ahead of an election year. 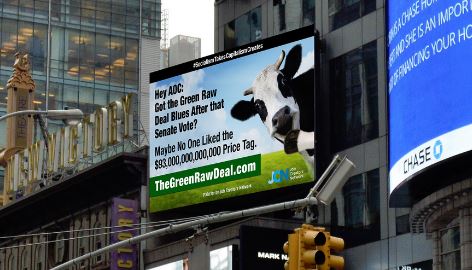 The same group created another billboard in February slamming Ocasio-Cortez for contributing to Amazon’s decision not to establish a campus in New York. The enormous company’s decision will cost the city thousands of jobs and billions of dollars in lost economic activity, the billboard claims.

Democratic New York Gov. Andrew Cuomo and NYC Mayor Bill de Blasio supported the Amazon deal, but many locals protested at stores and hearings, and the city council has badgered company executives about the company’s position on unions.