The Supreme Court grappled with a major question of agency law Wednesday, hearing what is likely the first in a series of cases challenging the federal bureaucracy’s power.

Wednesday’s dispute — involving a Vietnam War veteran called James Kisor who lost his bid to collect benefits from the Department of Veterans Affairs — concerned a rule of agency law called Auer deference. The 1997 Auer v. Robbins decision provides that a court should defer to an agency’s interpretation of its own regulation, unless it is obviously wrong.

By argument’s end, the Court’s conservative majority seemed poised to rein Auer in, but it was not clear they would overturn it altogether.

Business groups and conservative critics of the administrative state have waged a steady campaign against Auer in recent years. These critics accuse agencies of using Auer deference to expand their own power.

By this telling, an agency will intentionally issue a vague regulation, construe that regulation to its own benefit, then use Auer to command judicial fealty to its decision.

“Auer is particularly troublesome when agencies resolve regulatory ambiguities in favor of their own pecuniary self-interest,” Kisor’s opening brief at the high court reads.

Some scholars have called this argument a “false alarm” in view of research that indicates it does not happen very often.

Ambiguous regulations, Kisor adds, leaves the public confused as to what is and isn’t permissible, which violates the basic guarantee of fair notice.

Wednesday’s case may be the opening salvo in a lengthy crusade against the administrative state on the Supreme Court. The Trump administration, for whom deregulation is a high priority, enthusiastically supports that effort.

Speaking at the 2018 Conservative Political Action Conference (CPAC), former White House counsel Don McGahn said the administration was drawn to then-Judge Neil Gorsuch in part because of an opinion he wrote on the 10th U.S. Circuit Court of Appeals criticizing another agency deference doctrine called Chevron.

The administration made a qualified defense of Auer Wednesday, saying the Court should restrict its use, as opposed to overturning it. Justice Elena Kagan expressed frustration that no party before the Court was making a full defense of Auer deference.

“There might be a problem of a lack of adversarialness here,” she said. (RELATED: When Clarence Thomas Speaks)

Gorsuch was the leading Auer critic on the bench during Wednesday’s proceedings. Among other arguments, Gorsuch said questions of law should be decided by courts, not agencies.

“That seems to me a significant promise, especially to the least and most vulnerable among us, like the immigrant, like the veteran, who may not be the most popular or able to capture an agency the way many regulated entities can today,” he said. 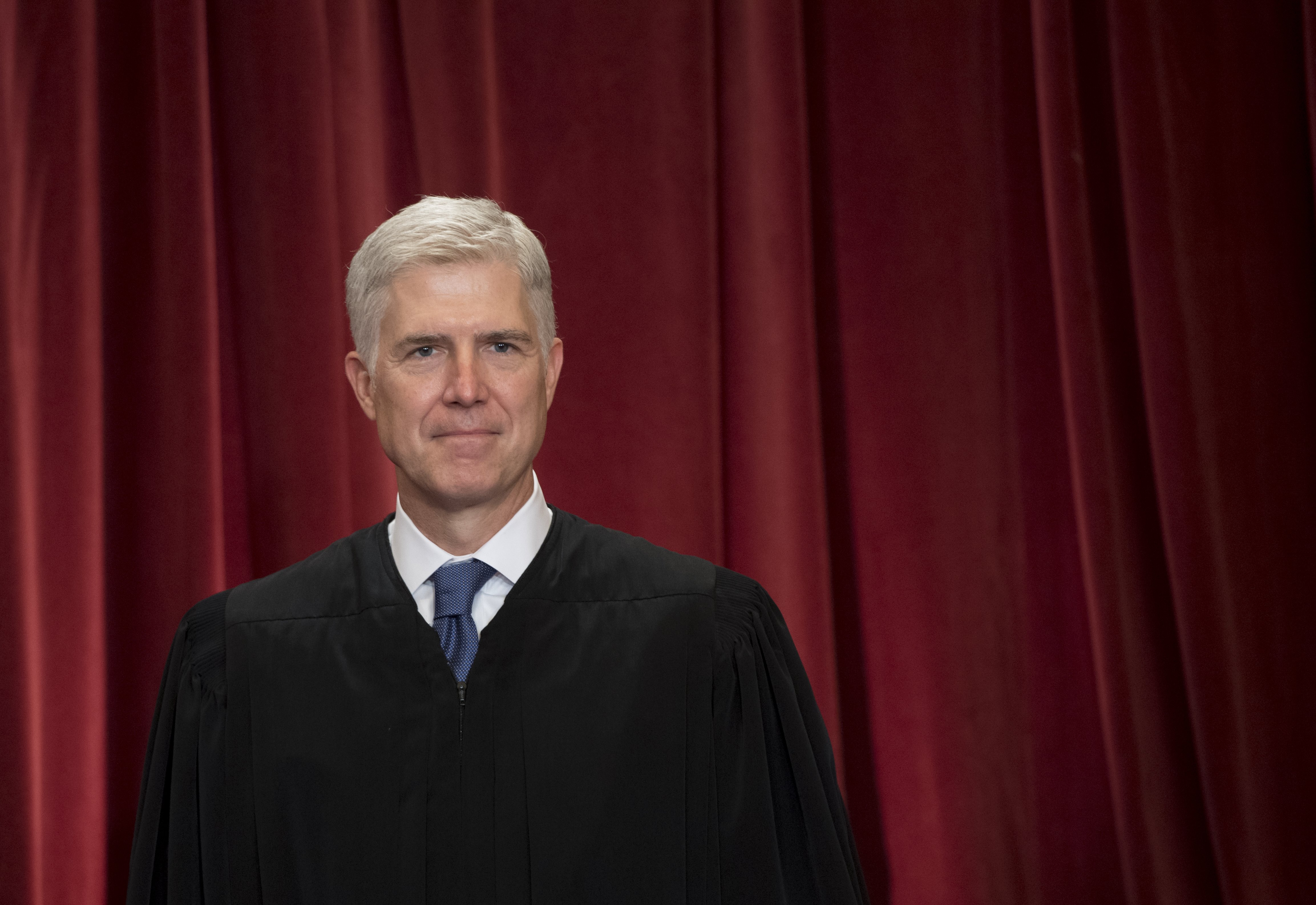 Justice Neil Gorsuch stands for an official photo with other members of the Supreme Court on June 1, 2017. (Saul Loeb/AFP/Getty Images)

Elsewhere, Gorsuch noted that the Court has already limited Auer in several respects. That being so, he reasoned, it might make sense to jettison Auer altogether, instead of continuously limiting its application.

“How much further should we go?” Gorsuch asked. “Or should we just give up on it altogether?”

For its part, the Court’s liberal bloc passionately defended Auer, saying agency experts are far better equipped to interpret regulations — which are sometimes highly technical — than are layman judges. Justice Stephen Breyer said a change to the current arrangement would amount to a power grab.

“This sounds like the greatest judicial power grab since Marbury versus Madison,” Breyer said, referencing the 1803 case that established that courts can strike down laws that violate the Constitution. Breyer quickly added that he thinks Marbury was rightly decided.

Kagan was equally emphatic, saying that the Supreme Court has referenced Auer and its predecessor in at least a dozen cases going back to the 1940s. What’s more, she continued, Congress has never expressed opposition to Auer despite its frequent use in the federal courts. It would be unusual to overrule precedent in such circumstances, she claimed.

“Congress has repeatedly acted in this sphere and shown no interest whatsoever in reversing the rule that the Court has long established,” Kagan said. “So why is it that overruling is the appropriate course here?”

Justice Antonin Scalia wrote the Auer decision, though he expressed doubts about the rulings in his later years.

A decision in Wednesday’s case, Kisor v. Wilkie, is expected by June.