“Really want to get to the bottom of why Tucker Carlson pronounces Don Lemon’s name as ‘Don Leh-MAHN.'”

“There needs to be a ‘no talking politics,’ option on Uber because y’all, this driver is testing my patience.” — Ken Farnaso, press secretary to Sen. Tim Scott (R-S.C.).

CNN’s Don Lemon throws Sen. Booker a softball q about being a vegan

David Martosko, U.S. editor, Daily Mail: “You never, ever waste an interview question asking a vegan about being a vegan. (They’ll tell you, even if you don’t want to know.)”

Booker on religion: “I would rather hang out with a nice atheist than a mean Christian any day of the week.”

“What’s ur reason for being on Twitter? Mine’s I like attention.” — Pardes Seleh, writer, Mediaite, formerly a scriptwriter at Fox News.

“I was all prepared to hate chick-fil-a when it came to NYC bc I am a good ally but I eventually went and tried it and damn their chicken is delicious.” — Ben Dreyfuss, editorial director, Mother Jones.

“Rep. Swallwell [sic] is either an embarrassing idiot or a stupid partisan. He contends the President is an agent of the Russians. Mueller and his equally partisan Dems, but with a significantly higher intelligence level, found no conspiracy, coordination or colluding with Russians.” — Trump lawyer Rudy Giuliani on Rep. Eric Swalwell (D-Calif.). (I’m sure Guiliani won’t spell the congressman’s name right next time.)

That was fast — John Podhoretz is back on Twitter

Commentary‘s EIC John Podhoretz — of cable-knit sweater fame — recently tweeted that he hoped J-Schools would get blown up with ex-Teen Voguer Lauren Duca teaching a journalism class called “The Feminist” at New York University. As a result, he threw himself off the medium.

Podhoretz’s pinned tweet: “Many of you are a great disappointment to me.”

Back in January, Podhoretz gave himself a time-out for tweeting that Roger Stone would enjoy prison. (RELATED: Podhoretz Gave Himself Twitter Spanking)

So far, he has not tweeted anything since his homecoming.

“Look, a lot of you are good people, but some of you are straight losers, and maybe if you pay attention to how I choose topics and work, you can turn that shit around for yourself.” — Mike Cernovich, filmmaker, conservative commentator.

Media Matters’ Matt Gertz must be so embarrassed

Secondly, you’re so shamed because Angelo Corusone, your cult leader over there at Media Matters, turned out to be a hypocrite.

Matt Gertz, senior fellow, MMFA: “When Howie Kurtz finally retires and Fox gives his “media criticism” show to Mollie Hemingway instead of Joe Concha I am going to laugh so goddamn hard.”

Observer (@michael2014abc): “Poor Matt Gaetz, he’s pissed off his @mmfa hit job on @TuckerCarlson fizzled out bc of @GoAngelo’s racist/anti-semitic/transphobic blog which he blamed on being made fun of as a fat kid. Now he’s going after Joe Concha. Maybe you & @brianstelter can coordinate better next time?”
Joe Concha, The Hill, co-host, WOR Tonight: “Already have a show, Matt. But always happy to entertain. Enjoy your day.”

Monica Lewinsky reacts to the concept of a 4-page brief

Orin Kerr, law prof, USC: “Imagine if the Starr Report had been provided only to President Clinton’s Attorney General, Janet Reno, who then read it privately and published a 4-page letter based on her private reading stating her conclusion that President Clinton committed no crimes.”

Monica Lewinsky: “If. fucking. only.”

Sen. Bernie Sanders comments on wrinkled flag outside his office 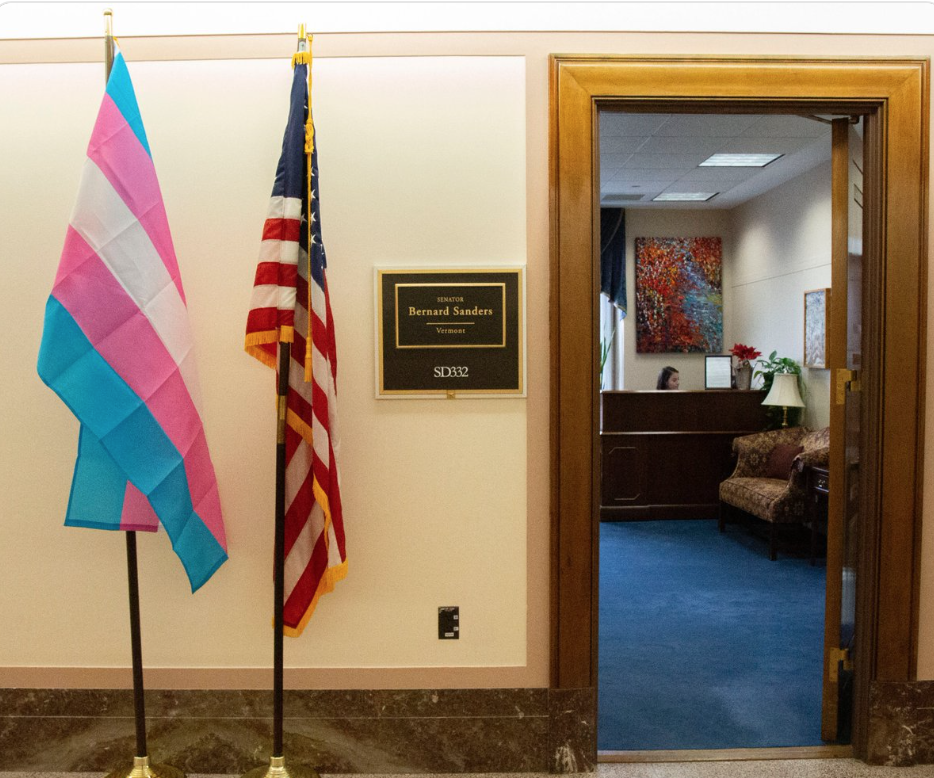 “Brian Stelter says he didn’t put the donuts tucker mailed him in a blender and drank them like a milkshake but we don’t have video showing what happened either way.” — Joe Gabriel Simonson, The Washington Examiner.

Stelter’s tweet about Smollett: “Cool. Were you there that night? Smollett’s camp says he was the victim of a hate crime. The police dispute that. There isn’t video of the alleged attack. Thus, we may never know what really happened.”

“Yes, it would have been better had Trump played the Mueller probe cooler, but just imagine hearing every other day in the media that “the walls are closing in” on you on Russia collusion and knowing it was complete BS.” — Rich Lowry, editor, National Review.

Us Weekly editor is out. She was “Chiu’d up” in six months. Creativity points for the lede. Here.

Whoa! Rosie O’Donnell says… Whoopi Goldberg was meaner to her on ABC’s “The View” than Fox News. Here.

Ellen‘s EP falls while skiing… “I just took such a hard fall skiing that I’m pretty sure my cerebrum and cerebellum swapped places.” — Andy Lassner.

Watch out! HuffPost freelancer Yashar Ali has obtained a copy of the new book on ABC’s “The View.” The book dishes a lot of dirt on Rosie O’Donnell and the show’s female journalist trailblazer Barbara Walters, who is described as a “narcissist.” Joy Behar, while eyeing Meghan McCain, made a crack this week that fights now happen backstage, not just on air. But according to this book, pretty serious skirmishes have happened long before McCain arrived. Here. (ABC’s The View’s Lost Love: Michael Avenatti)

Actor Alec Baldwin, who once allegedly called a paparazzo a “faggot”  but claimed he said “fathead,” hilariously wants to prove he’s not that angry. Here.

“The Obamas were always dirty as Mexican tap water and if we had a media in this country, everyone would know it.” — Jesse Kelly, senior contributor, The Federalist.

Eliana Johnson, Politico: “Lindsey Graham said to Trump over the weekend, per @jonatahnvswan, ‘I told him: If you really want to screw over your enemies, just be quiet for a while and be happy.'”

“Instead of complaining or politicking, tell me Twitter, what are you grateful for in your personal life right now, not politics?” — Erick Erickson, The Resurgent, conservative commentator. “I’ll go first — random friends who text just to offer kind words and prayers. Some I haven’t talked to in years. Also, fresh out of the oven cinnamon rolls.”

“My dog ate spoiled goat cheese out of the trash earlier and he’s apparently not feeling well. But did he learn his lesson? No. I’m sure he did not.” — Krystle Baker, occasional contributor, The Federalist.

A call for prayer…

“Someone very important to me got scary news today. In a universe where everything is energy, thoughts & intentions matter – so pls send love, prayers, healing wishes, burn sage candles, sing a song, recite a poem, hug a dog or baby & think of her healthy. I’d be so grateful.” — Elizabeth Thorp, editor of PYPO. She played Secretary of Defense on House of Cards.

“That hour in the morning on Saturday when I wake up first, all three cats are asleep on the bed and Jacob has his arm around me and I lay there and just enjoy the peace and contentment.” — Chad Felix Greene, senior contributor, The Federalist.