These days, with daily commutes measured in hours and road trips in weeks, many of us practically live in our vehicles. In fact, they are really extensions of our homes, affording a semblance of the conveniences, comfort and safety to which we’ve become accustomed. It’s important to remember, though, that they should be equipped with a few emergency supplies—such as food and water, a sleeping bag, even reading material—when venturing far and especially when facing a severe storm and natural or man-made disasters.

Even if you’re an armed citizen who carries a handgun while behind the wheel, such worst-case scenarios strongly suggest that a center-fire long gun should also be onboard because of the superior firepower, lethality and range it offers. Some might call it a “trunk gun,” but regardless of where you store it, make sure it suits your circumstances. For instance, if you live in a coastal area, think about choosing a stainless steel model since it’s likely to be stored for months in non-climate-controlled conditions. And if your route doesn’t take you through wide-open spaces, then consider an intermediate carbine rather than something with more power or range.

For my requirements—a daily commute of about an hour each way on a route running between the country and metropolitan outskirts—I considered several candidates, including a stainless 1894 Marlin lever-action in .44 Mag., a Yugoslavian SKS in 7.62×39 mm Russian, an AR carbine in 5.56×45 mm NATO and an M1A SOCOM in 7.62×51 mm NATO. Then I remembered yet another option that I thought nicely split the difference between the ends of that spectrum: a Ruger Mini Thirty. At 37½” overall and 7 lbs., it is relatively compact and lightweight to store and tote, respectively—the latter a consideration should I ever have to abandon my vehicle and set off on foot. And its autoloading action and detachable box magazines beat the lever gun and the SKS in terms of speed and ease of reloading, respectively. Finally, in my experience, the gun has always been reliable with quality ammunition in its 7.62×39 mm Russian chambering, which represents a good balance of power and shootability. 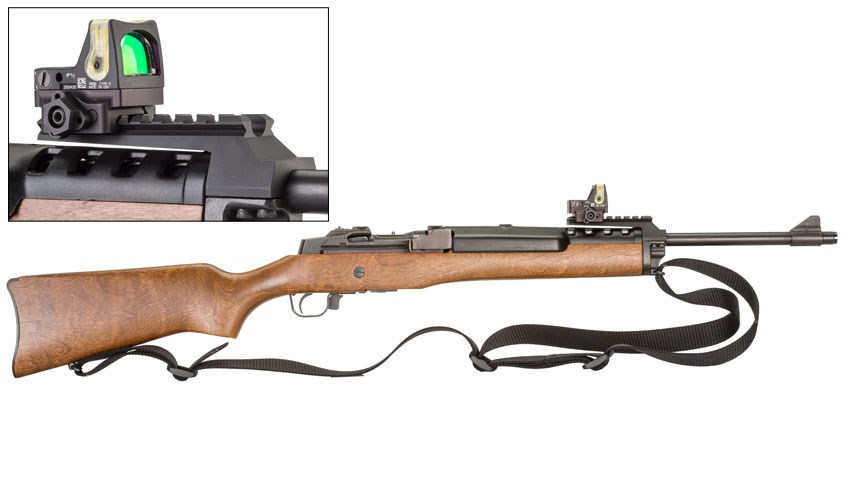 The Mini also offers the advantage of sporting-arm styling, especially with its flush-fit, five-round magazine, and factory 20-round magazines are readily available. Another advantage is that its design allows for quick takedown without tools into two relatively short sections. Simply unlatch the trigger guard and the barreled action, stock and trigger group separate.

Accessorizing the Mini Thirty for the task at hand was fairly easy. Its attached swivels allowed me to simply thread on a Langlois Rhodesian nylon sling made by The Wilderness ($30, thewilderness.com). Then, to complement the scout-rifle-style utility of its design, I installed Accuracy Systems’ Compact See-Through scope mount ($60, accuracysystemsinc.com). It bolts on, replacing the gas block’s top, to provide a section of Picatinny rail and cantilevers over the factory handguard. Its design allows the factory iron sights to remain accessible. When it came to considering optics, I knew one name held the answer for my application: Trijicon. I chose its RMR Dual Illuminated sight with 12.9-m.o.a. amber triangle reticle and a Low Quick Release Mount ($716, trijicon.com). Though not inexpensive, at less than 2″ in length and 3.5 ozs. in weight, it is neither bulky nor burdensome. Most important of all, since it is powered by tritium, and thus requires no batteries, it is always “on.” The final element, the Covrt M4 discreet case from 5.11 ($130, 511tactical.com), finishes out the kit and, even in plain view, does not invite unwanted attention. A padded sling and carry handle facilitate easy transport.

A trunk gun, like any firearm, is the owner’s responsibility. Don’t forget it’s packed away before you travel through areas where laws prohibit the transportation or possession of firearms. (For more clarification, read Guide To The Interstate Transportation Of Firearms at nraila.org.) Also, remember to check over the rifle on occasion, taking it to the range to confirm its zero and function and the condition of its ammunition. And if you do choose an optic that requires batteries, change them with a frequency recommended by the manufacturer. And don’t forget to wipe the gun down with a light oil before placing it back in storage to help keep rust at bay.

Finally, realize that the aforementioned example is just one answer to the question, “What makes the ideal trunk gun?” Many other viable possibilities may be less expensive and just as capable of matching your particular resources, preferences or circumstances. The ultimate goal is simply a greater level of personal preparedness—no matter where your journey takes you.