Google staffers are in revolt, demanding the removal of Heritage Foundation President Kay Coles James from an advisory board the company convened on artificial intelligence. A petition with more than 2,000 signatories from within the company was published on Medium on Monday, with the title “Googlers Against Transphobia and Hate.”

The petition’s signers described the appointment of Coles, a black grandmother, as a “weaponization of the language of diversity.”

The petition was promoted internally within the company by five individuals, some of whom have a history of leftist agitation. The Daily Caller obtained emails from a private listserv in which most of the petition’s sponsors made critical comments about the James appointment.

One of them, Meredith Whittaker, who leads Google’s Open Research Group, posted on a private Google listserv that, “I would disagree that their views are important to consider when those views include erasing trans people, targeting immigrants and denying climate change.”

Three of the other promoters of the petition are software engineers Joëlle Skaf, Nina-Marie Amadeo and Irene Knapp. The fifth is Emily Metcalfe, a privacy engineer. (RELATED: Google Employees Discussed Burying Conservative Media In Search)

“There is no debating the humanity of other people, especially ones who have had no power to fight policies advocated by entities like the Heritage Foundation,” wrote Skaf in an email on a private listserv the day James’ appointment was announced, continuing:

It is infuriating to see people on this thread give credence to despicable theories just because ‘marketplace of ideas’ or ‘more articulate people’ or whatever else. This is NOT a game. Google has enormous power, power that it frankly seems to not know what to use for. And asking entities like the Heritage Foundation for their opinions on how to use that power is misguided and will not lead an ethical use of AI. … In all cases, Google CONTINUES to show a total lack of leadership on these issues and a total capitulation to the political whims of the moment.

“Extremely well said, Joëlle,” Whittaker co-signed. She was identified by the New York Times as having been “openly critical of the Maven work,” in reference to a project for the Department of Defense that Google did not renew under pressure from activists. 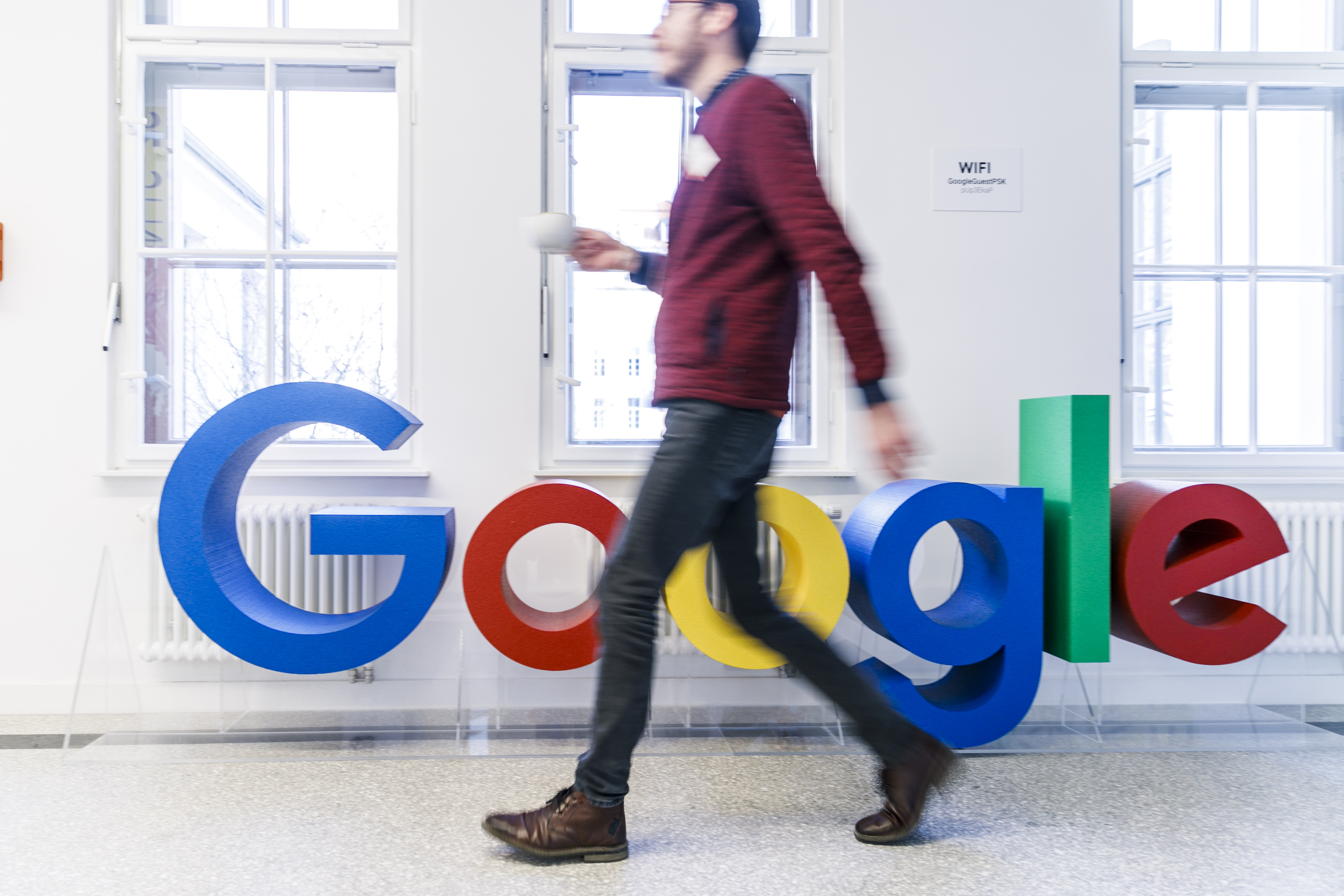 An employee passes the Google logo during the press tour before the festive opening of the Berlin representation of Google Germany on January 22, 2019 in Berlin, Germany. (Photo by Carsten Koall/Getty Images)

In an earlier email, Skaf wrote that the James appointment was “not only problematic for its anti ­LGBTQ positions. Remember the role it played in pushing for murderous foreign policy (Nicaragua, Cambodia, Angola, … I’m forgetting a lot, I bet), but also its positions on climate change (they don’t really believe it’s real), healthcare (sick poor people better croak … sorry I mean they better sign up for a market­ based solution to healthcare), immigration reform (not for it).”

“What can those of us who want to do something about this actually do? What are the correct channels for escalation?” replied Amadeo. (RELATED: Google Sponsored CPAC To Shape Narrative On Nationalism)

There was some pushback on the listserv from people with a more libertarian point of view. One said, “The notion of tolerance being bandied around here seems to amount to ‘tolerance for those who think like I do,’ which amounts to no tolerance whatsoever.”

But these voices were quickly shut down. “This line of thinking is just plain *offensive* and denotes a high level of privilege,” wrote Skaf. “No, it is not about ‘tolerance for those who think like I do’. It’s intolerance to those who don’t see me as human. And I am *proud* to be intolerant of such folks. … The sheer blindness to power and its workings on this mailing list is just stunning.”

“There is a difference between working with people we disagree with, and working with people who hold that people like me should not exist at all,” wrote Knapp. Knapp was previously best known for proposing in the Google shareholders meeting to scale executive pay by the success of diversity and inclusion efforts.

This picture taken on November 5, 2018 shows a woman passing a booth of Google at the first China International Import Expo (CIIE) in Shanghai on . (Photo by Johannes EISELE / AFP)

Several other Googlers made the point that, with both the left and the right now talking about the need to regulate or break up the company, having a conservative that could credibly vouch for the company to others on the right is very important. (RELATED: Google VP Stepped In After Employees Offended By Christian Video On Marriage)

Whittaker shot down this idea, “Instead [of] recognizing the historical gravity of our position, and rising to meet the occasion, we’ve invited a vocal bigot whose hand is on the lever of U.S. policy to shape our views on where, and how, to ‘responsibly’ apply this tech. I’m stunned by how many people’s mental energy is being expended finding a technicality on which to defend this.”

“Our goal is for Google to make ethical product decisions so that our work makes a positive impact on the world. It’s not to indulge on general snobbery on how good we are or how horrible someone else is. … But, as far as work is concerned, how do we ensure that AI and other advanced technology are used to help and not hurt people?” asked one libertarian Googler.

“First step: we refuse to take advice on how to use AI technologies from those who openly dehumanize many of our friends and colleagues,” said Whittaker.

Another Googler was extremely upset at the suggestion that the company should consult conservatives. “It’s not snobbery to object to associating with and legitimizing an organization dedicated to eliminating LGBTQ+ people from public life, driving them back into the closet, denying them healthcare, and so on,” he said.

“It’s basic human decency, treating it like a difference of opinion is simply monstrous and I don’t think it belongs on this list, or at Google at all. Please feel free to see yourself off this list if all you have to contribute is concern trolling about whether or not we’re pandering to rank bigotry enough. I’m muting you, and I think you should take a long hard look at how you’re behaving here. Have a nice day.”

The AI council to which James was named “will be making recommendations on the development and application of technology that has been repeatedly shown to encode and amplify bias against those already marginalized ­­ trans people, women, people of color, etc,” wrote Whittaker in a different email. “If we are to take ethics seriously, we need ensure the perspectives of those most at risk of harm from these technologies guide our decision making. Suffice to say, inviting the CEO of the Heritage Foundation to occupy the position of Ethical Compass is … a far cry from that.”

The Daily Caller has requested comment from Google and will update this story if they respond.