Democratic New York Rep. Alexandria Ocasio-Cortez seemed to use a forced accent during a speech to the National Action Network convention Friday.

Ocasio-Cortez speaks in an accent that she never uses while telling a room of predominately black people that there is nothing wrong with them folding clothes, cooking, and driving other people around on a bus for a living. pic.twitter.com/FIbIAPokt0

“This is what organizing looks like,” said Ocasio-Cortez. “This is what building power looks like. This is what changing the country looks like. It’s when we choose to show up and occupy the room and talk about the things that matter most, talking about our future.”

Then, the New York lawmaker really laid it on: 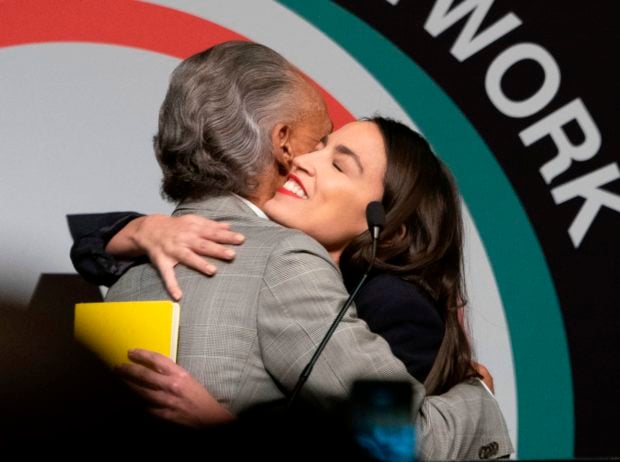 US Representative Alexandria Ocasio-Cortez (R) is welcomed by the Reverend Al Sharpton speaks during a gathering of the National Action Network April 5, 2019 in New York. (Photo by Don Emmert / AFP)

So notorious is Clinton for switching her accent to match that of her audience that Bloomberg Politics even put together a video of examples. Perhaps the most infamous of all was a 2007 speech at a black church in Selma, Alabama, when she said, “I don’t feel no ways tired.”

She trying too hard. The accent is so obvious????

Every African-American does not talk in this way. I guess you’re trying to “win the black vote.”

She is channeling her inner Hillary Clinton!!!https://t.co/g5WsgxlRoV

Hey, @AOC I wore the vest because CBP told me to but, what’s your excuse for talking like this?! #WedontTalkLikeThat https://t.co/4i5qQLNbNZ

“In case you’re wondering, this is what blackface sounds like,” John Cardillo wrote.

In case you’re wondering, this is what blackface sounds like. https://t.co/oQVynsDxpc