Former President Barack Obama lamented that progressives obsessed with “purity” on ideological issues could be creating a “circular firing squad” by taking aim at their allies.

The former president was speaking on Saturday at a town hall event for the Obama Foundation in Berlin. He reportedly used the Affordable Care Act as an example of compromising without achieving all of one’s goals.

“One of the things I do worry about sometimes among progressives in the United States —maybe it’s true here as well — is a certain kind of rigidity where we say, ‘Uh, I’m sorry, this is how it’s going to be,’ and then we start sometimes creating what’s called a ‘circular firing squad,’ where you start shooting at your allies because one of them has strayed from purity on the issues,” Obama said, according to The Hill. “And when that happens, typically the overall effort and movement weakens.” 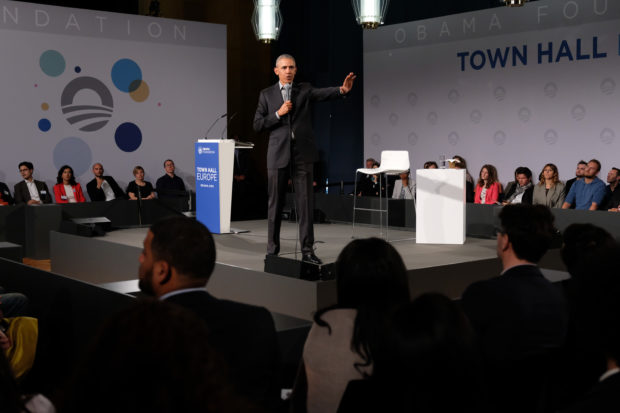 The former president emphasized that during his days as a community organizer he also “wanted change now and I wanted 100% of what I wanted,” but he later realized that getting things done often takes compromise. (RELATED: Barack Obama Responds Multiple Times To Hecklers During Florida Campaign Rally)

“So I think whether you are speaking as a citizen or as a political leader or as an organizer,” he continued, “you have to recognize that the way we structure democracy requires you to take into account people who don’t agree with you, and that by definition means you’re not going to get 100 percent of what you want.”