South Bend, Indiana Mayor Pete Buttigieg described his early desire to not be gay in a Sunday evening fundraiser, according to MSNBC’s Kasey Hunt.

“When I was younger, I would have done anything to not be gay.”

“When I was younger, I would have done anything to not be gay,” the 2020 presidential hopeful said in front of an LGBTQ fundraiser. “When I began to halfway realize what it meant that I felt the way I did about people I saw in the hallway at school or the dining hall at college, it launched in me something that I can only describe as a kind of war. And if that war had been settled on the terms that I would have wished for when I was 15, or 20, or frankly even 25, I would not be standing here.”

If you had offered me a pill to make me straight, I would have swallowed it before you had time to get me a sip of water. It’s a hard thing to think about now. It’s hard to face the truth that there were times in my life where if you had shown me exactly what it was inside me that made me gay,  I would have cut it out with a knife.

Buttigieg’s sexuality has been a topic of hot debate for some, like whether or not he is “gay enough” to overcome his status as a white male in the 2020 Democratic primary, a claim that was widely discounted in a New York Times op-ed last Wednesday. 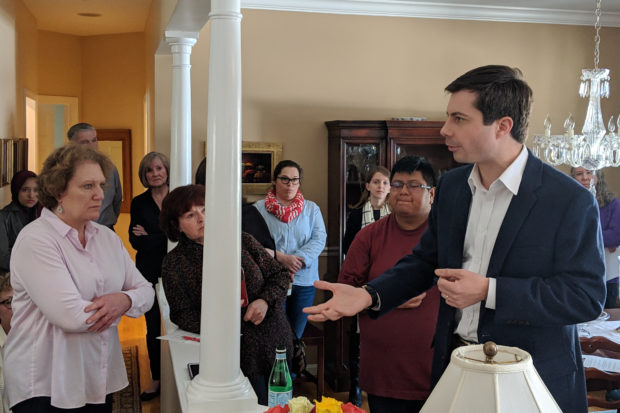 In the article titled “Mayor Pete Is Plenty Gay,” Columnist Frank Bruni concluded, “He sounds sufficiently gay to me. His powers of empathy seem plenty informed by his sexual orientation. And we need to stop making assumptions about how well someone can understand and address what minorities go through based on his or her looks.” (RELATED: Buttigieg Calls Evangelicals Who Support Trump Hypocrites)

The mayor also emerged as a Christian foil to the Trump administration, taking turns to criticize President Donald Trump and Vice President Mike Pence for their actions. He called evangelical Christians who support the president hypocrites due to his past behavior and allegedly paying off Stormy Daniels.

“Mayor Pete” announced his candidacy in January and has made news criticizing Trump’s religion before. He called Pence the “Cheerleader for the porn-star presidency” during a CNN town hall last month.

His support in the polls and gambling markets has increased recently, although some at a modest rate. He also attended a fundraiser Wednesday in Hollywood where he spoke to celebrities and workers alike about his plan for the country.