Turkmenistan Bans Use Of The Word ‘Coronavirus’

Here’s How Adam Baldwin Is Surviving Coronavirus And Hollywood

Cardinal Vincent Nichols of Westminster urged British youths to turn in their knives and leave gangs as part of a campaign against knife crime.

Nichols made his plea to U.K. youths April 6 for the “Standing Together” rally against violent knife crimes. The cardinal encouraged youths who are involved in gangs to find some way to leave them and asked youths who own knives to get rid of them, arguing that owning a knife predisposes them to use it to harm others and themselves instead of making them safer. (RELATED: Muslim Asylum Seeker Imprisoned For Killing Wife Who Converted To Christianity)

“If you or your friends are involved in gangs, try to find a way out,” Nichols said in a transcript of his message posted on the archdiocese’s website.

“If you or your friends carry or possess knives, go to one of the banks and anonymously get rid of the knife in your possession, just get rid of it. It doesn’t make you safer, it puts you at risk of being provoked into using it, and not only will you cause harm to somebody else, you’ll damage your own life,” he added.

Both the archdiocese and local police stations operate knife banks where people can anonymously relinquish any knives deemed illegal. 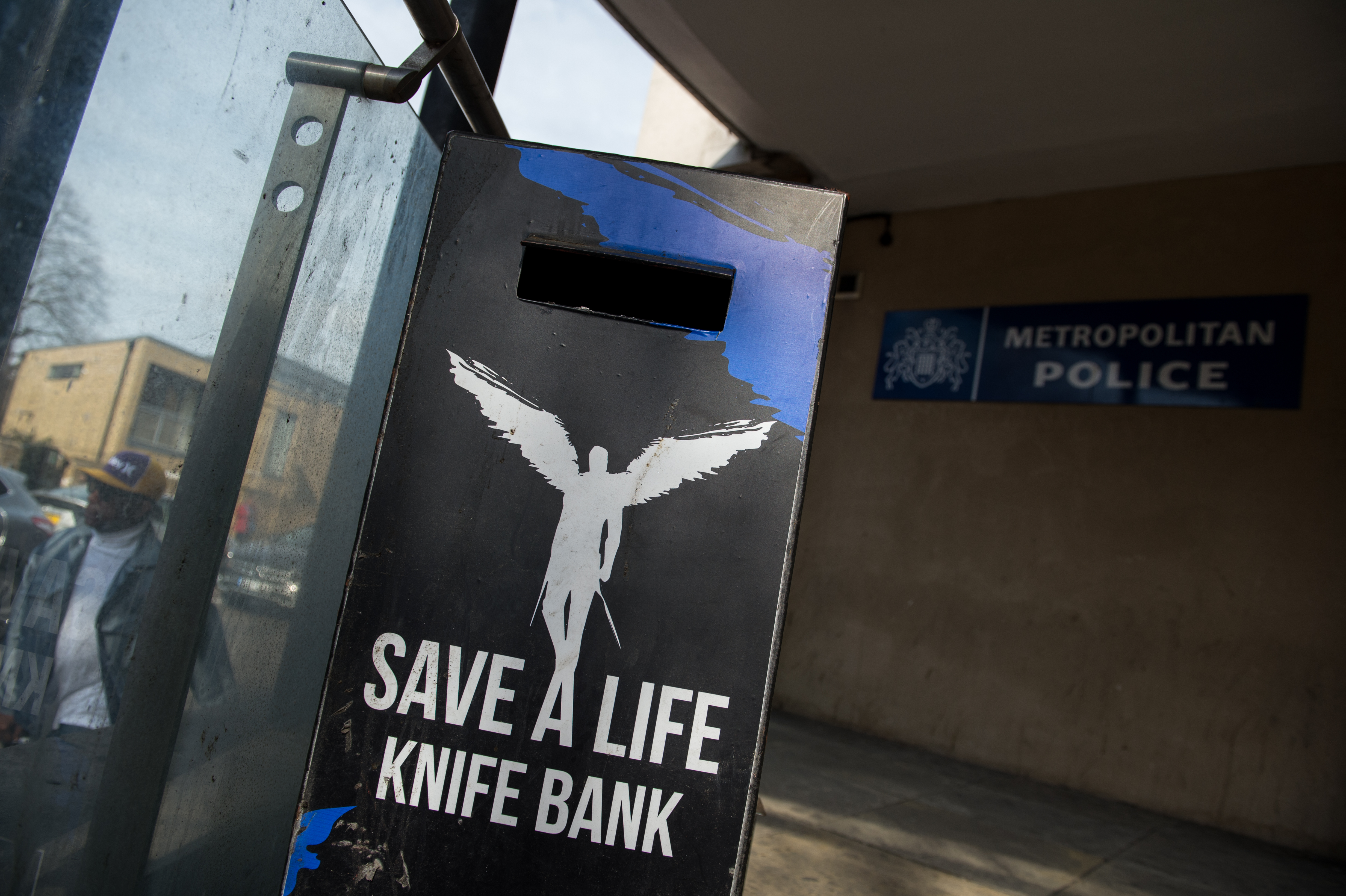 A knife bank is seen outside Brixton police station, as extra police officers have been deployed after a recent rise in killings in the capital on April 7, 2018 in London, England. (Photo by Chris J Ratcliffe/Getty Images)

Violent knife crimes have continued to rise despite the U.K.’s regulations on knives. The Office for National Statistics revealed that between March 2017 and March 2018 there were a total of 285 “knife and sharp instrument homicides,” making it the worst spike in violent knife crime since 1946 when the U.K. first began collecting data on the issue, according to Crux Now.

Nichols suggested the rise in violent crimes was ultimately the fault of a “breakdown of relationships,” exacerbated by gang culture.

He argued that the only way to combat the epidemic of violence was to offer youths “a sense of belonging to something else — something that’s positive, creative and attractive to them.”

Nichols cited as an example a priest who requested to start a boxing club in his parish.

“This is the kind of reaction we need, to involve young people in a way that calls out their commitment and helps them to build discipline and self-control in their lives, and that’s the best counter to some of the worst influences today,” Nichols said.

The cardinal also urged youths to anchor their lives in Christ, rather than any other source.

“Build friendships, find places where you can go and sit and honestly talk and share your experiences with other people,” Nichols said. “Say your prayers, turn to God, turn to Christ and let your life grow from that relationship with Jesus rather than from anywhere else.”