Pope Emeritus Benedict XVI broke his years of silence on the Catholic Church’s sex abuse crisis Thursday, blaming it on the sexual revolution and a breakdown of Catholic moral teaching.

Benedict XVI explained his thoughts on the causes of the sex abuse crisis, his own reforms intended to combat it, and what he believes to be the solution in an over 6,000-word essay published Thursday first in the Bavarian monthly Klerusblatt and then in Italian newspaper Corriere della Sera.

The pope emeritus ultimately blamed the rise of the crisis on “the absence of God,” citing the 1968 Sexual Revolution and a collapse of Catholic moral theology that led to the establishment of “homosexual cliques” in seminaries.

“Why did pedophilia reach such proportions? Ultimately, the reason is the absence of God,” Benedict XVI wrote.

We Christians and priests also prefer not to talk about God, because this speech does not seem to be practical … God is regarded as the party concern of a small group and can no longer stand as the guiding principle for the community as a whole. This decision reflects the situation in the West, where God has become the private affair of a minority. A paramount task, which must result from the moral upheavals of our time, is that we ourselves once again begin to live by God and unto Him. 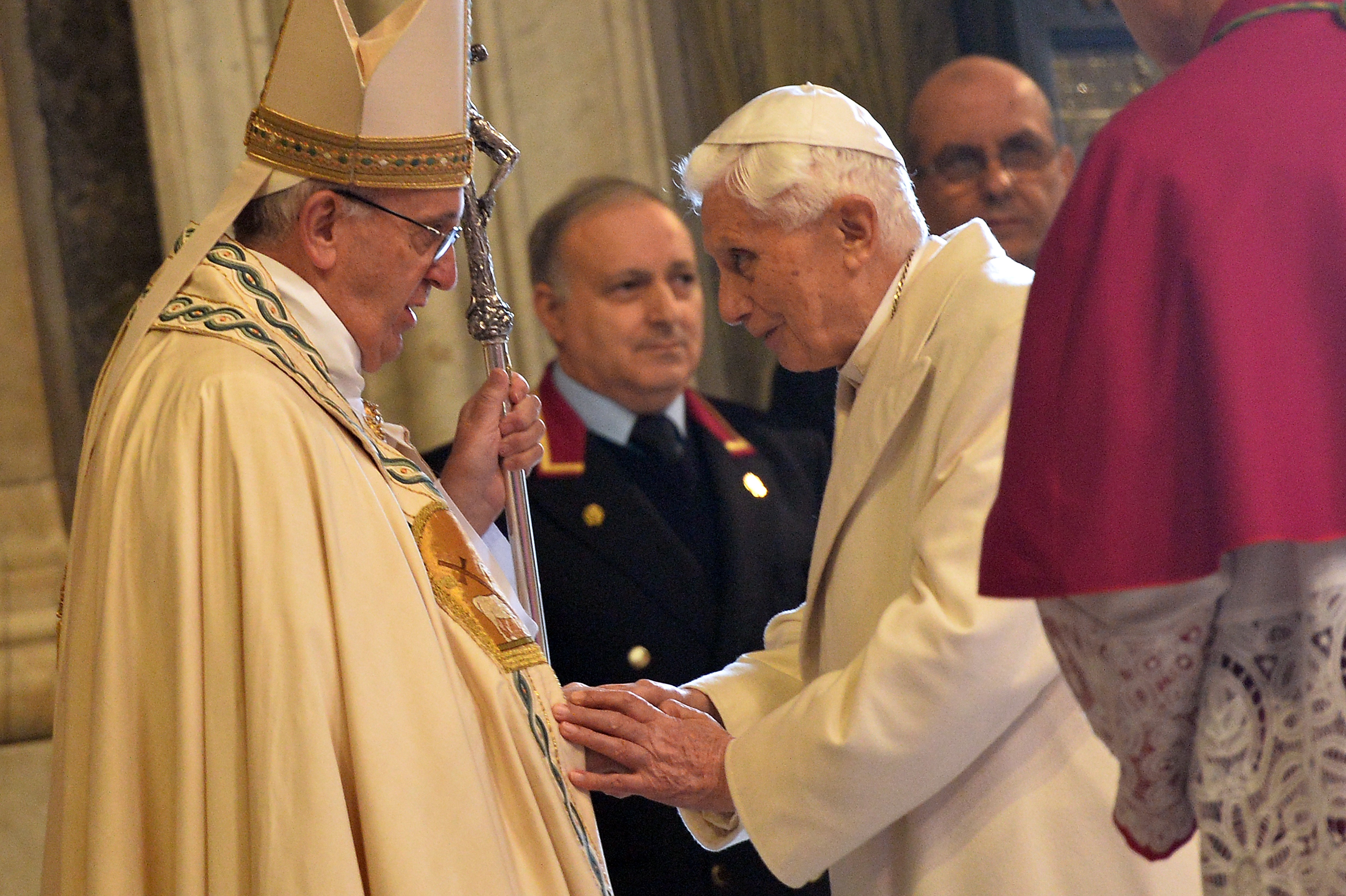 Pope Emeritus Benedict XVI (R) speaks to Pope Francis during the ceremony marking the start of the Jubilee Year of Mercy, on December 8, 2015 in Vatican. (ALBERTO PIZZOLI/AFP/Getty Images)

The sexual revolution sought to establish an “all-out sexual freedom, one which no longer conceded any norms,” which provoked a propensity for sexual violence and the societal normalization of pedophilia, according to Benedict XVI.

“The extensive collapse of the next generation of priests in those years and the very high number of laicizations were a consequence of all these developments,” he asserted.

He claimed that a concurrent but independent collapse of Catholic moral teaching devolved from the Second Vatican Council’s attempt to reform that moral teaching without using Natural Law as its basis. That attempt at reform led to a Catholic moral teaching based on the idea that “morality was to be exclusively determined by the purposes of human action that prevailed” or, in other words, “the end justifies the means,” with no concept of absolute good or fundamental evil, according to the pope emeritus.

This “dissolution of the Christian concept of morality,” exacerbated by the “radicalism of the 1960s,” according to Benedict XVI, led to ongoing moral crises within the church and, ultimately, to a breakdown in the traditional preparations for the priesthood, which enabled the abuse crisis.

The pope emeritus also argued that Canon Law proved inadequate to deal with the rising sexual abuse crisis in the 1980s, as dealing with the mounting criminal cases of abuse proved beyond the capacity of the Congregation for Clergy and canon law itself provided too much protection for the accused.

Benedict XVI said that he and John Paul II sought to rectify that by transferring the responsibility of dealing with abuse cases to the Congregation for the Doctrine of the Faith (CDF), which allowed for “the maximum penalty” to be levied against proven abusers. That, however, also proved beyond the capacities of the CDF at the time. The pope emeritus said Francis has since instituted reforms to fix the issue, but did not specify those reforms.

The pope emeritus argued that the solution to the crisis is ultimately to turn back to God and to embrace and revere the mystery of the grace and person of Christ, and therefore be transformed by it, rather than trying to over-analyze and master the faith.

“The counterforce against evil, which threatens us and the whole world, can ultimately only consist in our entering into this love. It is the real counterforce against evil. The power of evil arises from our refusal to love God. He who entrusts himself to the love of God is redeemed. Our being not redeemed is a consequence of our inability to love God,” Benedict XVI wrote. “Learning to love God is therefore the path of human redemption.”

The pope emeritus has until now remained silent on issues facing the church since resigning from the papacy six years ago and retiring to a monastery in the Vatican to devote his life to prayer. He said, however, that he contacted both Francis and Vatican Secretary of State Cardinal Pietro Parolin before submitting his essay for publication, and that he felt it was right for him to break his silence in light of his experience and the gravity of the crisis that has challenged many people’s faith.

Benedict XVI also thanked Francis at the end of his essay “for everything he does to show us, again and again, the light of God, which has not disappeared, even today.”

The pope emeritus’ approach to the sex abuse crisis was markedly different, however, than that of Francis. Francis, when he has spoken about the crisis, has referred to abuse as a crime and has attributed the widespread nature of that crime within the church to the culture of clericalism — that is, a culture in which clerics are protected and privileged above others to the detriment of the faithful.

Benedict XVI, by contrast, attributed the crisis to theological failures of the church that allowed for the abandonment of God in western society.

“Western society is a society in which God is absent in the public sphere and has nothing left to offer it. And that is why it is a society in which the measure of humanity is increasingly lost. At individual points it becomes suddenly apparent that what is evil and destroys man has become a matter of course,” Benedict XVI said.

“That is the case with pedophilia.”

The pope emeritus’ argument also does not parse between the influences of homosexuality and pedophilia on the sex abuse crisis, as other clerics have done, but attribute them both to the Sexual Revolution, which he lambasted as an event of overall moral dissolution.