Georgia Democratic politician Stacey Abrams could have a hard time running for U.S. Senate in 2020, according to a new poll released Friday from the Atlanta Journal-Constitution.

The poll reports that Abrams has an overall approval rating of 44% — down from the 51% she earned in January in the same poll. Her disapproval numbers increased from 40% in January to 44%.

Republican Sen. David Perdue has a slight lead in favorability, earning 46% in the poll and a significantly smaller disapproval rating. Only 24% of registered voters in the state don’t think Perdue is doing a good job in office. (RELATED: Biden May Choose Stacey Abrams As His 2020 Running Mate So People Don’t Think He’s ‘Another Old White Guy’)

The majority of Abrams’ support comes from the Atlanta metro area. She earned 56% approval in the region, compared to Perdue’s 39%. The Republican-dominated in both the northern and southern part of the state though. Perdue earned 54% and 52% approval ratings, respectively.

The Democrat garnered 82% among members of her party, compared to just 71% of Republicans who approved of the job Perdue did in office. 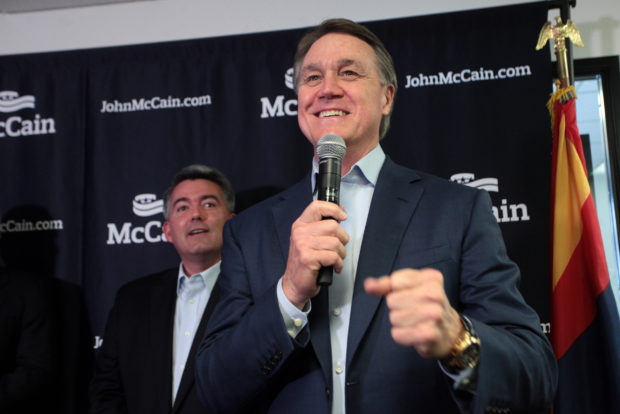 Abrams lost the Georgia gubernatorial election in 2018, earning 48.8% of the vote compared to Republican Brian Kemp’s 50.2%

Despite those returns, the Democrat has still not conceded the race, claiming that the election was stolen from her, and going on to say that she was “plotting” her revenge in the wake of the election.

Stacey Abrams, fresh off her meeting with Joe Biden earlier today in DC, said someone outside asked if she’s ever going to concede the Georgia gubernatorial election.

“I don’t concede that I lost. I acknowledge that I’m not the governor of Georgia,” she said, according to the Atlanta Journal-Constitution. “That’s made plain every day I don’t walk into the Governor’s Mansion.”

“I upend the tradition of politics where you’re supposed to be genteel, say everything is fine. I didn’t do that,” Abrams continued. “I could fight just to fight, but the minute it becomes about me, it becomes a vanity project. … That can’t be the reason you do things. And I spent that 10-day period plotting. Revenge can be very cathartic.”

She also began the month of April by asserting that she actually won the race and that she refused to concede the race because the race wasn’t proper.

“We had this little election back in 2018, and despite the final tally and the inauguration and the situation we find ourselves in, I do have one very affirmative statement to make: we won,” Abrams said.

“I am not the governor of Georgia,” she continued. ” … We can work as hard as we want, we can fight rights, but if you’re fighting against the system that is designed to oppress you, sometimes you got to fight a little bit longer than you think.”

The Atlanta Journal-Constitution polled 774 registered voters in the state of Georgia from March 24 through April 8, and the poll carried a margin of error of 3.5 percentage points in either direction.