A group of around 350 migrants attempting to join a caravan on the way to the United States broke the locks and forced their way through a gate between Mexico and Guatemala on Friday.

The National Immigration Institute said the migrants, likely from Central America, behaved in a “hostile” and “aggressive” manner and even attacked police in the Mexican border village of Metapa, according to an AP report.

The group then merged into another caravan of around 2,000 migrants making their way to Tapachula on their journey to the United States.

One migrant, 43-year-old Honduran Claudia Jaqueline Sandoval, told press she has been “HIV positive for 16 years.” 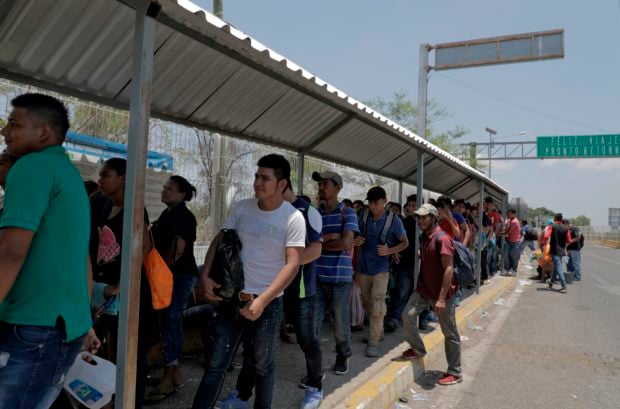 Honduran migrants wait at the international border bridge in Ciudad Tecun Uman, Guatemala, as they wait to cross into Mexico on April 12, 2019. – A group of 350 Central American migrants forced their way into Mexico Friday, authorities said, as a new caravan of around 2,500 people arrived. (Photo by Rodrigo Mendez / AFP / Getty Images)

Friday’s action was the latest example of escalating tension on the border between Mexico and Central America. Earlier this week, a group of Cuban and African migrants staged a riot at a Tapachula immigration station in an attempt to prevent authorities from deporting them, according to several Mexican media outlets. They reportedly ransacked the building and set several documents on fire before authorities regained control. (RELATED: Tucker Balks When Univision Anchor Suggests Paying Off Central American Countries To Stop Immigration)