Firefighters stood helpless to stem the blaze in Notre Dame cathedral Monday likely because of Gothic engineering techniques that waterproofed the roof, consigning it to destruction.

The roof and spire of Notre Dame were all but doomed to burn once flames began to spread, possibly begun by a renovation accident, because of a Gothic engineering technique used to waterproof the top of the cathedral by placing a lead sheet roof over a wooden truss structure on top of the groin vault that served as the ceiling of the cathedral’s nave, according to Ted Henderson, who has a background in medieval architecture and archaeology. (RELATED: Flames Light Up Paris As Notre Dame Cathedral Burns)

The wooden truss became highly flammable as it dried over hundreds of years, but was sealed from the outside by the lead sheets, and therefore impervious to firefighters’ efforts to douse the flames with water.

“So the wood catches on fire, and it’s not actually exposed to the outside of the building anywhere,” Henderson told The Daily Caller News Foundation. “In fact, the reason the roof is covered with lead is so water can’t get inside. It’s specifically fireproofed. So when the firemen, you know, arrive on the scene and they’re spraying cathedral with water, it’s running off the sides of the lead roof and can’t access this void where the fire is actually spreading.”

As the fire grows hotter, the lead super-heats and melts, falling down onto the stone vault of the nave, which overloads the vault and causes it to collapse inward, creating an imbalance of weight throughout the entire structure and possibly leading to a total collapse, Henderson said. A number of Gothic cathedrals have suffered near total collapses due to fire throughout history, including The Papal Basilica of St. Paul Outside the Walls, which burnt in 1823 because a workman repairing the lead roof accidentally began a fire. 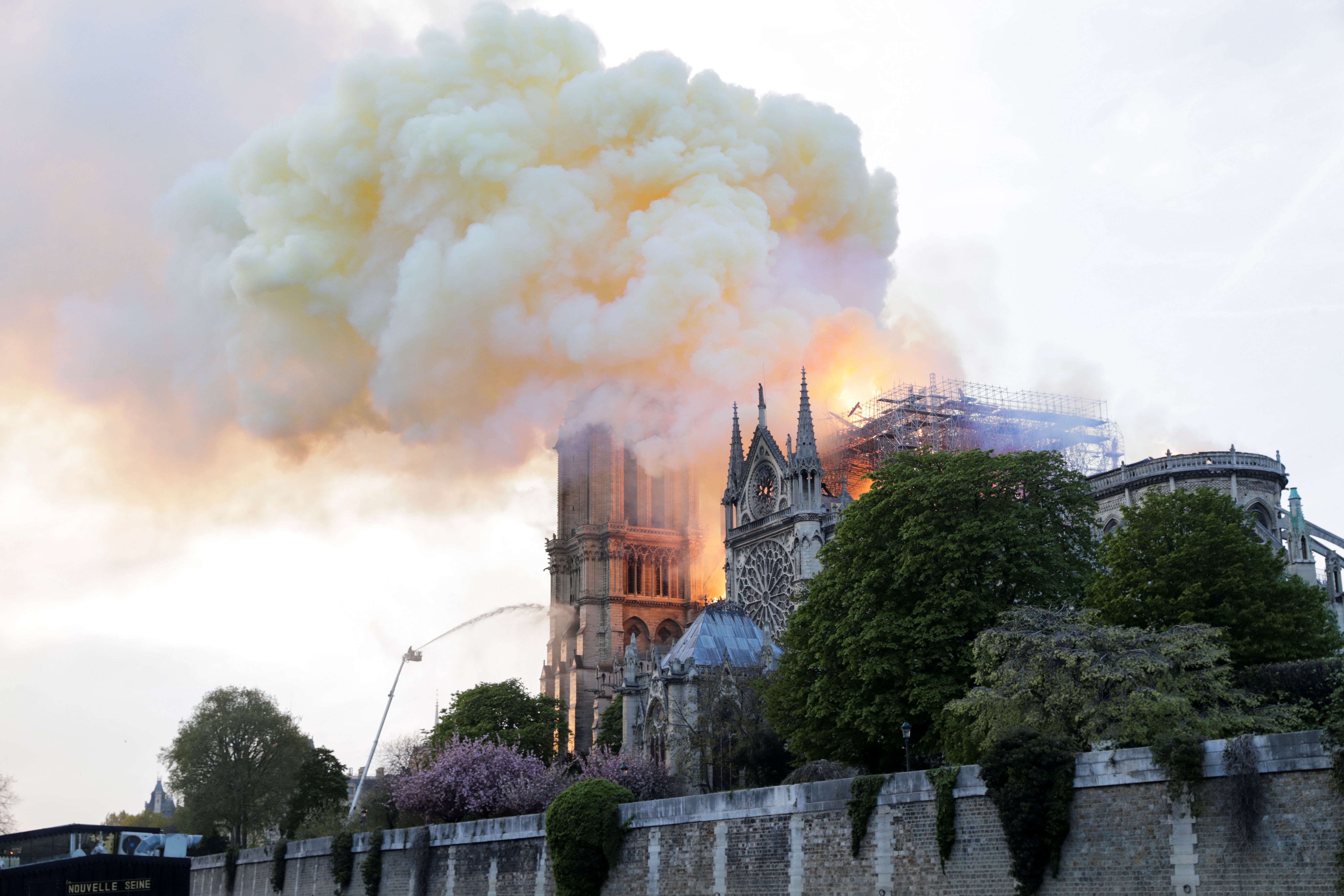 Flames and smoke billow from the roof at Notre-Dame Cathedral in Paris on April 15, 2019.(THOMAS SAMSON/AFP/Getty Images)

The walls, however, do stand a chance of remaining upright.

“The best case scenario at this point is you’re going to get a shell, an exterior shell over the building. Maybe with the bell towers still standing,” Henderson told TheDCNF.

While roof, spire and all of the stained glass windows of Notre Dame are tragic losses, Henderson told TheDCNF the fire also endangered one of the most sacred Christian relics in history housed behind the cathedral’s altar — the crown of thorns worn by Christ.

“This is like one of the very, very few relics that might actually be legitimate and real in the cathedral and almost certainly destroyed,” Henderson said of the crown of thorns. “It sits right behind the altar at the rear of the cathedral. And if you look at the videos right now, the area immediately above it is completely engulfed in flames.”

One French journalist, however, reported the crown of thorns, works of art and the sacraments in Notre Dame were somehow saved from the fire. Further sources have yet to confirm that.

“Good news: all the works of art were saved. The treasure of the Cathedral is intact, the Crown of thorns, the Holy sacraments. #NOTRE_DAME” https://t.co/X0FSl7eHO7

The crown of thorns was kept in Constantinople in the Byzantium empire until Emperor Baldwin II offered it to King Louis IX of France in exchange for hefty financial support of his nearly bankrupt empire. The crown of thorns was considered at the time to be “the most valuable single object on the face of the earth,” according to Henderson.

The crown of thorns has been in near continuous royal possession since Constantine the Great, with the exception of the time between when it was stolen during the French Revolution and returned.

EDITOR’S NOTE: This article has been updated to clarify Henderson’s background.