Up-and-coming 2020 Democratic presidential candidate Andrew Yang describes his campaign as one of “ideas.” He also puts a large emphasis on math, often using the phrase, “I’ve looked at the numbers.” Some of the campaign posters and hats seen at his rally this week in front of the Lincoln Memorial simply read, “MATH.”

Yang is running on many ambitious ideas, from universal basic income — which is perhaps his most popular policy among voters — to socialized healthcare. And while these are not new ideas, Yang is delivering them in a new way.

The New York entrepreneur discussed his top five campaign points during a Tuesday evening rally in Washington, D.C. The rally began with the same goal all Democratic candidates have campaigned on so far:

“This country is going through major problems,” he started. “Now, I am not a career politician. I’m an entrepreneur. I’m a problem solver, and I’m here to solve the problem that many Americans have been struggling with in the past two years, and the problem is this: Why is Donald Trump our president?”

He then went on to explain that many people blame Trump’s success in winning the 2016 presidential election on five things: Russia, racism, sexism, Facebook and the FBI. (RELATED: 2020 Dem Candidate Casts Himself As The Opposite Of Trump Because … Math?)

“These are the explanations we’re getting. But I looked at the numbers. … The reason why he is the president today is because we automated away 4 million factory jobs in Michigan, Ohio, Pennsylvania, Wisconsin, Missouri and Iowa — all the swing states he needed to win and did win,” Yang went on, which brought him to his next point:

2. Adapting To The Workforce Takeover Of Artificial Intelligence

The “fundamental change” that allowed Trump to win the presidency was the expansion of AI, and “what we did to the manufacturing workers, we will do to the retail workers and the fast-food workers and the truck drivers and on and on.”

Jobs that were once controlled by humans will be completely overrun by AI in about three years, according to Yang. Approximately 2.5 million people who once earned about $14 per hour answering phones will be out of jobs. He also explained that we’re five to 10 years away from Amazon purchases being delivered from one state to another by self-driving trucks.

“When AI can outperform one [human], it can outperform tens, hundreds, thousands of them,” he explained. “I talk a lot about truckers. Driving a truck is the most common job in 29 states in this country. There are about 3.5 million truck drivers, 94% men, average age 49. … My friends in Silicon Valley are working on trucks that can drive themselves, and they’re doing it for the most American of reasons. They’re doing it for the money.”

Yang then told the crowd he went to Washington, D.C., to figure out a solution to truck drivers losing jobs to AI. “The responses I got … were these,” he explained. “1) We cannot talk about that. 2) We should study that further. 3) We must educate and retrain all Americans for the jobs of the future. … But again, I looked at the numbers.”

The success rate for federally funded retraining programs for manufacturing workers in the Midwest, according to Yang, ranged from 0–15%, and Washington is doing nothing at the moment to help restructure those programs.

“Challenge accepted,” Yang said. To tackle that challenge, he plans to bring a universal basic income to the United States.

Yang described himself as “an Asian man running for president who wants to give everyone $1,000 a month.”

“The Freedom Dividend” is Yang’s universal basic income policy proposal, which would give every American adult over the age of 18 $1,000 a month, amounting to $12,000 a year, to ” enable all Americans to pay their bills, educate themselves, start businesses, be more creative, stay healthy, relocate for work, spend time with their children, take care of loved ones, and have a real stake in the future,” his website states.

Yang told his audience at the rally, “You thought, ‘This literally sounds fantastic. This sounds too good to be true. This almost sounds like a gimmick.’ But when you look into our history, you realize this idea has been with us since the founding of this country.”

The 2020 candidate brought up Thomas Paine, Dr. Martin Luther King, Milton Freedom, and other historic examples of people who have expressed support for something like a UBI.

Even fellow 2020 candidate Bernie Sanders, who is also in favor of a UBI, is quoted on the entrepreneur’s site, saying, “In my view, every American is entitled to at least a minimum standard of living. … There are different ways to get to that goal, but that’s the goal that we should strive to reach.”

But how would a new president pay for such a policy to be successfully implemented? Yang brought up the fact that Alaska already has a UBI policy model to work from. Alaska’s program, which assures that everyone in the state gets between $1,000 and $2,000 a month, is funded by oil. They call this money “oil checks.” 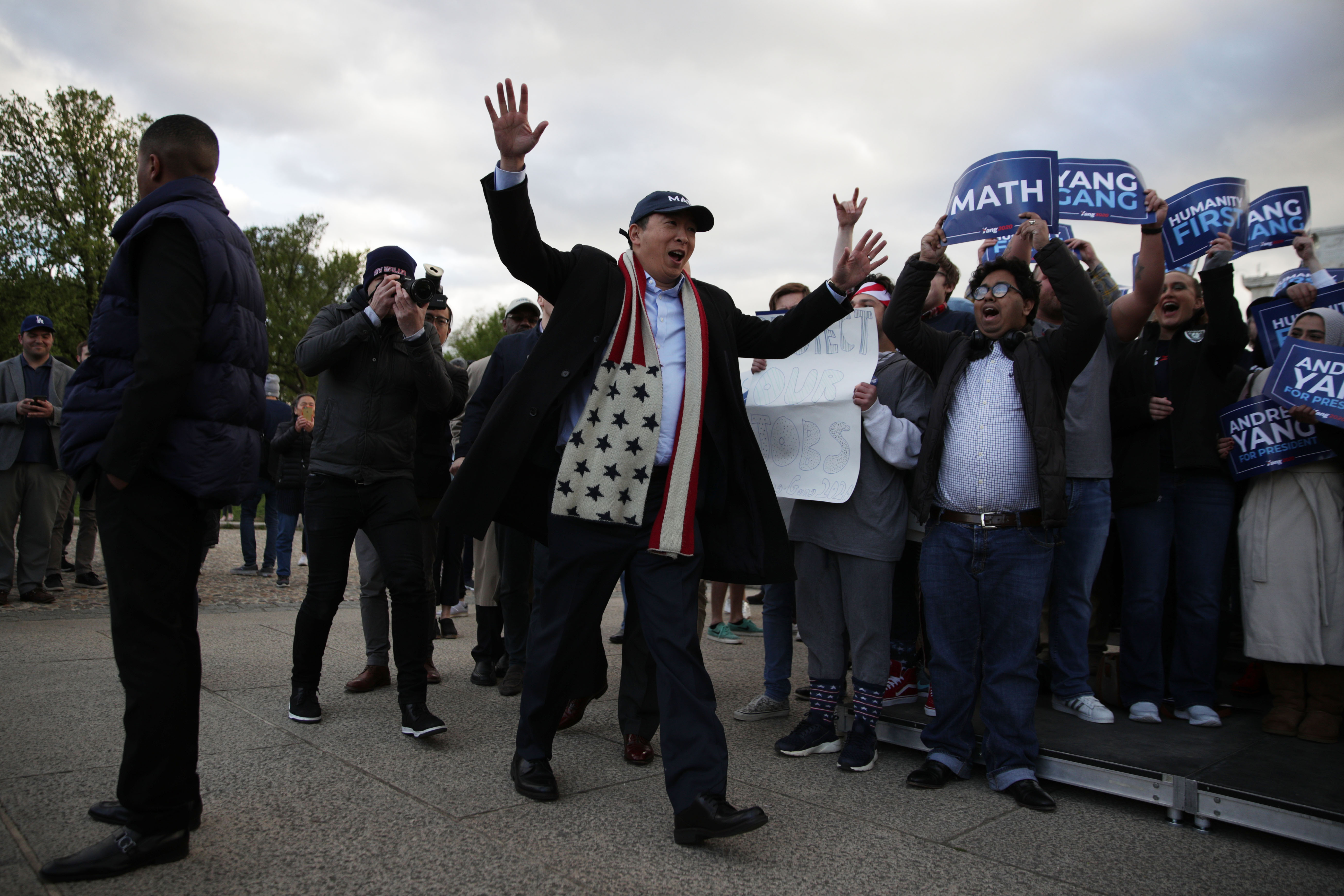 Yang suggests that his nationwide UBI money would come from technology, or “the oil of the 21st century,” though he did not go into further detail about how technology or what kind of technology would produce enough money to pay $1,000 a month to every adult in the country.

The candidate claims the money would stay in local communities with people spending their “tech checks” on food, bills, health care and “the occasional night out,” which would circulate in the towns that people live in. Yang calls this a “trickle-up economy,” and one of the benefits of such an economy would be a new health care system.

4. Implementing Medicare For All

“We have to get health care off of your backs,” Yang told the crowd. “Health care, right now, is a massive weight on millions of families and individuals, where, if you get sick or injured, you’re more stressed out about our crazy labyrinth of a healthcare system than you are [about] actually getting healthy … and that’s messed up, that’s immoral, and we can change it.”

He went on to explain that in the richest, most advanced country in the world, we should be moving toward a public health care option, such as Medicare for All. (RELATED: Yang: ‘I’m 100% Ready’ To Rain Down Death If It Means Protecting The US)

“I’ve looked at the numbers,” Yang repeated. “We spend 18% of our GDP with worse results than other countries, and so whenever somebody [asks], ‘How are you going to pay for it?’ Are you kidding me? I’ve run companies, and I’ll tell you, we’re spending a ton of money on health insurance. … It’s a disincentive to hire someone … to change jobs … to start a new business.”

His website reads, “With a shift to single-payer, costs can also be controlled directly by setting prices provided for medical services. The best approach is highlighted by the top-ranked Cleveland Clinic. There, doctors are paid a flat salary instead of by a price-for-service model. This shift has led to a hospital where costs are visible and under control.”

Neither his website nor his speech, however, go detail about how he expects to fund a Medicare-for-All-type health system. There is also no mention of taxes.

Yang’s ideas on GDP and capitalism are unlike those of any other Democratic candidates.

“Capitalism as an economic system has led to unparalleled innovation and improvement in the human condition,” his website states. “Many consider it to have ‘won’ the war of ideas against socialism, but that simplistic view ignores that there is no such thing as a pure capitalist system. And our current version of institutional capitalism and corporatism is a relatively recent development.”

During his rally, he discussed how GDP is a “phantom number that we made up almost 100 years ago” that does not benefit people who have generally good behavior and benefit society through their actions. He mentioned his wife, who stays home with their three- and six-year-old sons, one of whom is autistic. Her work value, he said, adds no value in GDP, and the market also values her work at zero.

“We know that’s nonsense,” he continued. “We know the work she is doing is more important, more vital, more challenging than a lot of the other work that’s being done in our country. So we’re going to follow GDP, right now, off a cliff.”

Yang recently deleted a policy on his website sponsoring a Chinese-style “social-credit” system in which a government-run mobile app would track Americans’ behavior and reward good behavior with “digital social credits” (DSC), the Daily Caller News Foundation reported in November. Good behavior would include acts ranging from “participating in a town fair” to “tutoring a student.”

His current “Human-Centered Capitalism” policy idea, however, does not include any kind of app or rewards for good behavior. Instead, it aims to switch Americans’ focus away from money and toward human health and mental health. His three pillars of Human Capitalism are:

“We have to change the measurements,” Yang told his audience. “Even the inventor of GDP said three things. He said, 1) This is a terrible measurement for national wellbeing and we should never use it as that; 2) we should include parenthood because it’s so important; and 3) we should not include national defense spending because it adds no economic value.”

The candidate received 3% support from voters in a national Democratic Primary poll conducted by Emerson College Polling on Monday. As of April 2, he raised $1.7 million from more than 80,000 individual donors in February and March, Politico reports. The average donation was $17.92.