“It is [Robert] Mueller eve and the redactions are color-coded.”

Sanders Campaign COS: Stay away from Neera Tanden’s mom

“Coming late to this, but the fact that the Times used Neera’s mom in this story was way out of line. Leave families out of it.” — Ari Rabin-Havt, COS, Sen. Bernie Sanders (D-Vt.) 2020. (RELATED: NYT Upsets Clinton Camp After Reporter Calls Ex-Aide’s Mom)

“I am drinking a mint cold brew from @CompassCoffeeDC and it’s shockingly good. That is all.” — Elizabeth Nolan Brown, Libertarian feminist writer, Reason Mag.

He reportedly smeared feces on the wall of the Ecuadorian Embassy.

“Julián Assange is literally what happens to your body when you never see the sun and remain stationary in front of a fluorescent computer screen.” — Eddie Scarry, commentary writer, Washington Examiner.

“I will start posting outfits for men to wear.” — Naomi Fry, staff writer, The New Yorker.

Don Jr. and Kimberly Guilfoyle to be honored at Lincoln Day Dinner 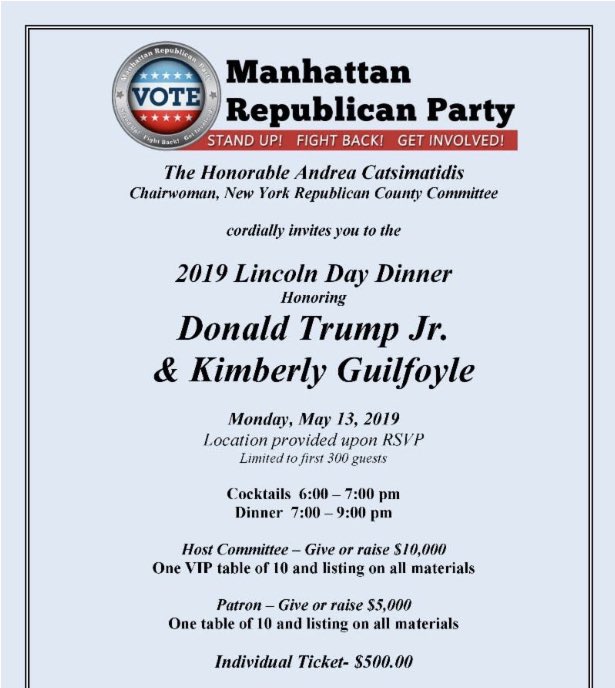 This seems a little drastic…

“I would die for every woman in my FB group.” — Lyz Lenz, writer, Columbia Journalism Review. Or this one: “Sometimes I think I haven’t lived but then I remember the time I dressed in a gorilla costume and pretended to be big foot in order to scare small kids and then they chased me with sticks and I think, I’ve done alright.” (RELATED: By Day She Was Sobbing, By Night She Was F**king)

“We’re burying my father today. It’s going to be tough. But I awoke this morning to an email from my colleagues saying that 100 of them have donated $2,000 to an indigenous charity in his memory. I’m overwhelmed and moved beyond words by their kindness.” — David Mack, deputy director, breaking news, BuzzFeed.

Hello from Trump Tower! I had some time to kill in NYC and stopped by this very small @realdonaldtrump-branded store in the lobby. pic.twitter.com/LnubRfBDd2

A push for positive news… Here.

Roger Stone, political strategist, former Trump aide: “I do not get my news from CNN for the same reason I do not eat out of the toilet.” Here.

HuffPost is popping the Mayor Pete Buttigieg popularity bubble. The story essentially accuses him of having “blind spots” and of having trouble identifying with people who are impoverished. Which, um, is not unlike President Trump and nearly all the other hopefuls. Oddly, Buttigieg, who takes most interviews, would not respond to questions for the story. Here.

Steve Bannon & his allies have leased a monastery in the Italian countryside for 19 years, where they plan to build a school for budding populists and “modern gladiators.” But it’s ignited protest from locals, who want Bannon to take his right-wing populist agenda elsewhere. pic.twitter.com/kHWhY86SQu