The Trump administration announced its decision Wednesday to roll back Obama-era Cuba policies and allow lawsuits against companies that confiscated land from those who fled former Cuban dictator Fidel Castro’s regime.

Secretary of State Mike Pompeo announced Wednesday that Trump’s government will no longer suspend a provision to a law known as the Helms-Burton Act that allows former Cuban citizens who fled to the United States for their own safety to sue foreign companies who confiscated their land after Jan. 1, 1959, Fox News reports.

Former President Bill Clinton revoked the provision in 1996. Former Presidents George W. Bush and Barack Obama kept the revocation of the provision in place during their terms in office to avoid “trade clashes and a potential mass of lawsuits that would prevent any future settlement with Cuba over nationalized properties,” according to NBC. 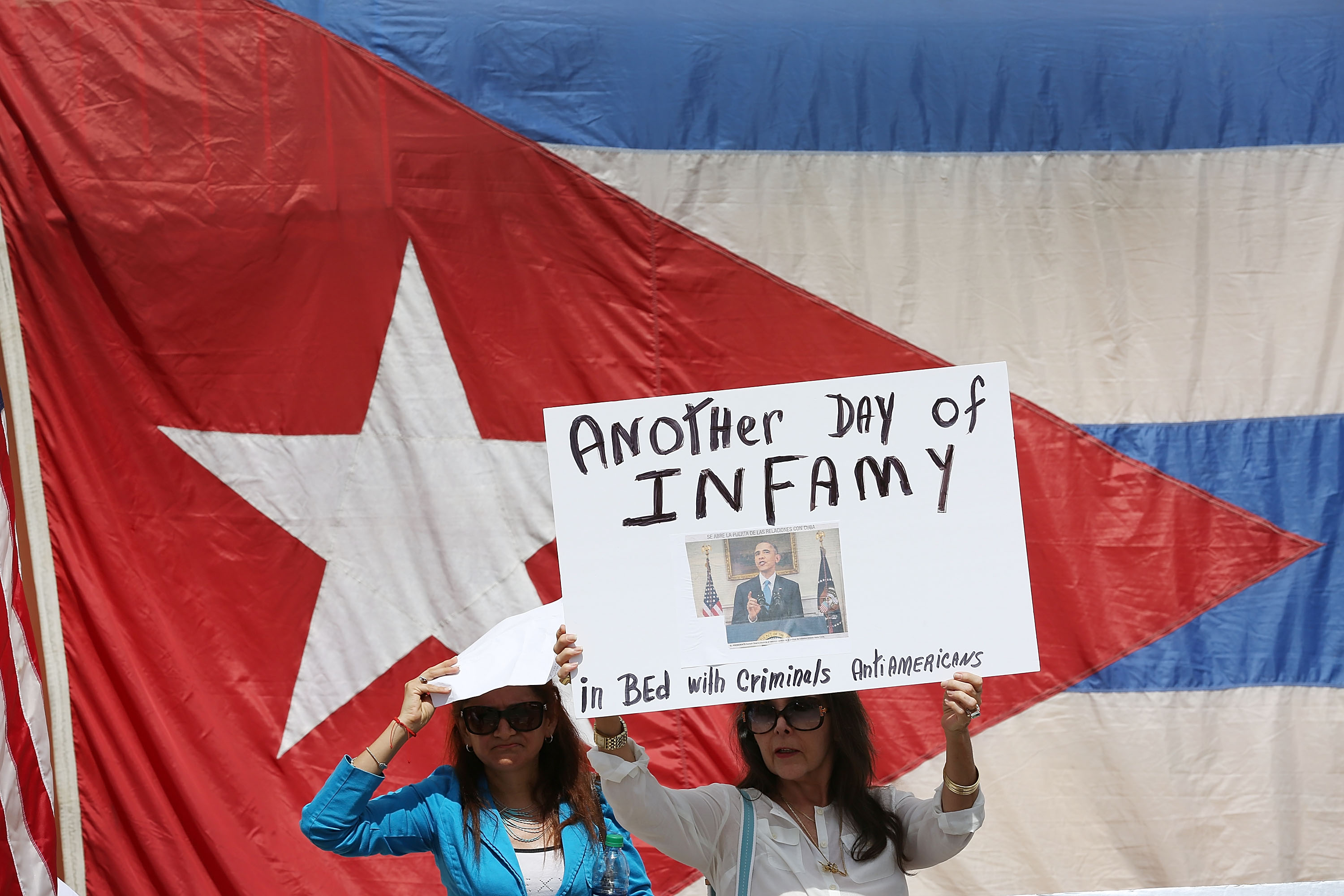 Laura Via Nelly holds a sign that reads, ‘Another Day of Infamy’, as she shows her displeasure, in the Little Havana neighborhood, with the normalization of the Cuban/United States relationship … (Photo by Joe Raedle/Getty Images)

“The move could affect dozens of Canadian and European companies doing business in Cuba — embroiling the businesses in litigation that could cost them billions of dollars and upending relations between Washington and its traditional allies,” Fox reports.

Pompeo explained that the original goal of the provision was to encourage democracy and a market economy in Cuba after Castro’s regime, but the country has made little success moving toward either goal.

As the Council on Hemispheric Affairs explains:

The requirements for a ‘democracy’ outlined by the Helms-Burton Act call for Cuban movement towards a market economy, and require evidence that Cuba has made ‘demonstrable progress in returning to United States citizens … property taken by the Cuban Government.’

Pompeo told reporters at the State Department that Cuba’s “repression of its own people and unrepentant exportation of tyranny in the region has only gotten worse because dictators perceive appeasement as weakness, not strength.”

Cubans queue to buy bread in a street of Havana, on March 19, 2016 … RODRIGO ARANGUA/AFP/Getty Images

National Security Adviser John Bolton also announced Wednesday at an event in Florida that honored veterans of the United States’ failed 1961 Bay of Pigs invasion of Cuba that the administration is limiting all non-family travel to the island and restricting the amount of money that someone in the United States can send to a family member in Cuba to $1,000 every three months.

“While the last administration wanted to improve relations with the tyrants in Havana,” Bolton said, “and to convince the world that they posed no threat, the Cuban regime tightened its grip and extended its tentacle. These new measures will help steer American dollars away from the Cuban regime, or its military and security services.”

The decision comes as an effort from Trump to put harsher pressure on three socialist Latin American countries, including not only Cuba but Venezuela and Nicaragua. Trump has placed significant sanctions on Venezuela in recent months in an effort to oust socialist dictator Nicolás Maduro, whose government is receiving help from Cuba, China and Russia.

“The walls are closing in,” Bolton said of the administration’s increasing pressure against Maduro. “There is no turning back. The people will prevail. And when they do, we know that Cuba will be next. And soon after, we pray, the third member of the Troika, Nicaragua, will also, at last, be free.”

Vice President Mike Pence, who has voiced his formal support for Venezuelan opposition leader Juan Guaido, wrote on Twitter Wednesday, “Two weeks ago, the [United States] sanctioned ships transporting Venezuelan oil to Cuba. Today, [Trump] took additional action against the Cuban regime. As I said at the U.N., the [United States] will continue to hold Cuba accountable for its larceny [and] it’s support of dictator Maduro until Venezuela is free.”

Two weeks ago the U.S. sanctioned ships transporting Venezuelan oil to Cuba. Today @potus took additional action against the Cuban regime. As I said at the UN, the US will continue to hold Cuba accountable for its larceny & it’s support of dictator Maduro until Venezuela is free. https://t.co/LxZz5stSGq

Many others have voiced their concern over Trump’s regulations, including the EU and Canada, who said in a joint statement that they “consider the extraterritorial application of unilateral Cuba-related measures contrary to international law. … Our respective laws allow any U.S. claims to be followed by counter-claims in European and Canadian courts, so the U.S. decision to allow suits against foreign companies can only lead to an unnecessary spiral of legal actions.”

1
Scientists Might Have Accidentally Cured Cancer
World
2
BARR: The Impeachment Trial Briefs Are In, And The Winner Is...
Opinion
3
Judges Explain Why They Are Knocking Down Enviro Attempts To Sue Oil Companies Into Oblivion
Energy
4
Jim Acosta Drops Impeachment Questions On Ivanka Trump For World Stage — She Blows Him Off
Media
5
Pete Buttigieg Begs Silent Iowa Crowd To Clap For Him
Politics