This was Donald Trump Jr. at 1:24 p.m., laughing about Attorney General William Barr clamping down on CBS News White House correspondent Paula Reid who suggested during the contentious press conference Thursday morning that he was cozying up to President Trump by protecting him.

Earlier in the day — about an hour and a half earlier — Don Jr. sounded more earnest and angry.

“I never thought I’d see the day that Democrats would be distraught and in tears that their President DID NOT COLLUDE WITH THE RUSSIANS,” the first son tweeted just after noon. “Just shows that they don’t really care about America, they care only about power.”

On Wednesday Ivanka visited a Cocoa farm, where she danced in a white frock with poofy short sleeves. 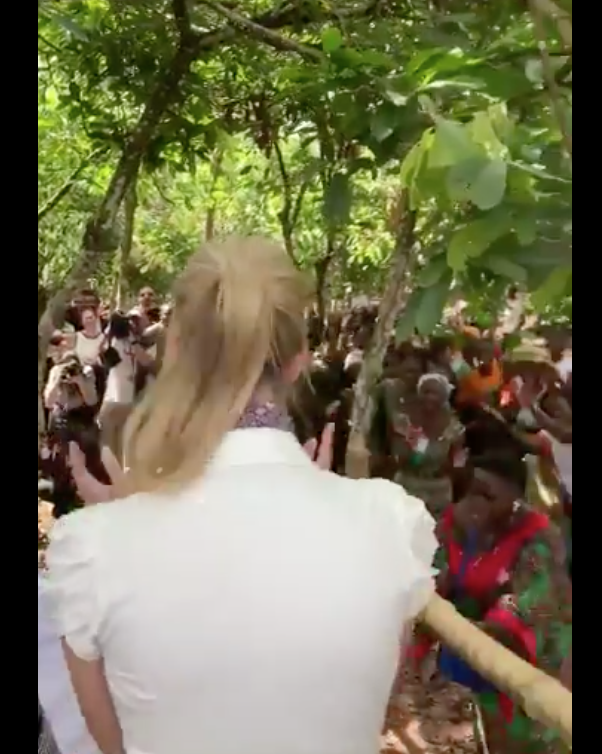 Like Ivanka, Tiffany Trump was also MIA on Mueller Day. The Georgetown Law student is more of an Instagram fan. Her last post is wishing her little brother, Barron, a happy thirteenth birthday back in March. “Happy Birthday, B!” she wrote.

Let’s continue with Don Jr. On Thursday, he gloated in the direction of CNN’s Chief Media Correspondent Brian Stelter.

Stelter sounded wishful that the report would contain a world of shitty news for Trump. He also sounded like he was offering advice to reporters on how to cover the release of the Mueller report, which is just ridiculous.

“The Mueller report’s been out for 1 hour,” Stelter tweeted Thursday morning. “Focus on what it says, ignore what partisans SAY it says. They haven’t even finished reading it yet!”

Jr. shot back, “I guess Brian doesn’t want anyone watching CNN’s meltdown. I get it. If I were in his shoes, I wouldn’t either. I almost feel bad for them.”

He felt so almost badly that he began hate-watching the network he loves to loathe.

“It’s so much fun hate-watching @CNN right now,” he wrote. “I don’t normally take joy in other people’s misery, but after the lies and discord they sowed for the past 3 years about my family and me I’ll make an exception today. #BetterLuckNextHoax guys.”

Jr. also went after CNN’s Jake Tapper. “Fake Jake can’t help himself,” he wrote, bestowing a Donald Trumpesque nickname on the cable news anchor. “By far the most thin-skinned guy in the game.”

“Full melt down at @CNN,” he wrote. “Fun to watch. As I have always said, they would rather see our country fail than see my father succeed.”

When a fan wished him and his family “Godspeed,” Eric was full of gratitude and kudos for his father, the greatest man who ever lived.

“Thank you!” he wrote. “Despite nonstop harassment, our country has never been stronger – economically, militarily, from a jobs perspective, etc. It makes it worth it. @realDonaldTrump will go down as one of the greatest American presidents. I am very proud of him and today the system worked.”

Don Jr. had other stuff to dump off his chest: “After two years of reporting exactly the opposite as fact based lies and on obviously phony sources, like the Schiffs if the world, you think they’ll finally report the truth or just quadruple down???” he exclaimed in response to conservative radio’s Mark Levin.

“President Trump, his family, his staff, his campaign, etc. never colluded with Russia,” Levin wrote in a vocal defense of the first family. “The president never interfered with the investigation. In fact, he gave unprecedented access to staff and documents. He never asserted any privilege. Thus entire Democratic-press effort to ruin this president has been exposed.  Now it’s time to investigate the true perpetrators of this coup attempt. And for we, the people, to hold the press to account.”

A soap opera star and a Columbia prof told him to simmer down.

“You might wanna keep the braggadicia down there, Jr.,” wrote ABC General Hospital’s Nancy Lee Grahn. “I realize you live with many challenges and don’t have the capability to understand big concepts but Mueller concluded you were too dumb to know what you were doing. He didn’t say you didn’t do it. Get well soon.”

David Rothkopf, a Columbia prof and a contributor to Foreign Policy, tried to ruin Jr.’s day another way — by pointing out how ‘dumb’ he is.

“Dude. You don’t know what’s coming do you?” Rothkopft asked. “You are just too damn dumb to see it. This is not the end of investigations…it’s the beginning. And Mueller’s conclusions don’t exonerate you, they confirm everyone’s worst suspicions about you. You won’t like how this story ends.”

“Despite the media’s endless lies about me supposedly committing perjury, I spent 27 hours testifying under oath to Congress & was always open/honest with them,” he wrote at 10:22 a.m. “It’s pretty clear that had I done something wrong, Mueller’s team of Dems would have charged me. Better luck next hoax!”

But it was Eric Trump, who started the day at 9:50 a.m. with what was the most patriotic message from the Trump children.