Extinction Rebellion, the group behind the mass protests, is demanding the U.K. government implement laws to bring greenhouse gas emissions to zero by 2025. This is the same group that recently staged a nude protest in Parliament.

“In a time of climate breakdown and ecological collapse, telling the truth is a rebellious act,” the group tweeted Friday as protesters swarmed central London for another day of demonstrations. Earlier in the week, protesters glued themselves to the London subway.

In a time of climate breakdown and ecological collapse, telling the truth is a rebellious act. We will continue to #TellTheTruth and #RebelForLife. Join our non-violent rebellion against government inaction on the #SixthMassExtinction: https://t.co/PzxBohj9iu pic.twitter.com/L3cyY6BkH7

Extinction Rebellion says it’s intentionally breaking the law to not only gain attention, but also use subsequent court hearings to “tell the courts that without an urgent and radical change of course” climate change will “likely to be catastrophic,” the group’s website reads.

The group also wants to change international law to make “ecocide” a punishable crime. The group defines ecocide as “human activities that cause extensive damage to, destruction of, or loss of ecosystems of a given territory.”

However, their critics accused protesters of being more interested in implementing “Marxism” than tackling climate change. (RELATED: The ‘Biggest Implication’ Of Mueller’s Report Has Nothing To Do With Obstruction, Experts Say)

Telegraph columnist Ross Clark wrote “the reality is that these are hardened, wraggle-haired protesters who have made a life out of trying to disrupt global capitalism.”

London police have made more than 570 arrests, according to BBC. Protesters have spent the past five days unfurling banners, carrying signs and reciting poetry as they held up traffic in central London.

“This is very, very difficult for us because my colleagues have never come across the situation that they are faced with at the moment,” Ken Marsh, chairman of the Metropolitan Police Federation, told BBC.

“They are dealing with very, very passive people, probably quite nice people, who don’t want confrontation whatsoever with the police or anyone else but are breaking the law,” Marsh said.

The police have started to make arrests in Oxford Circus after we finished reading out our poems to the crowd.

We need the government to take radical action now.

Please listen to the people. Or stand aside and let something better emerge.#InternationalRebellion pic.twitter.com/RulqFr954b 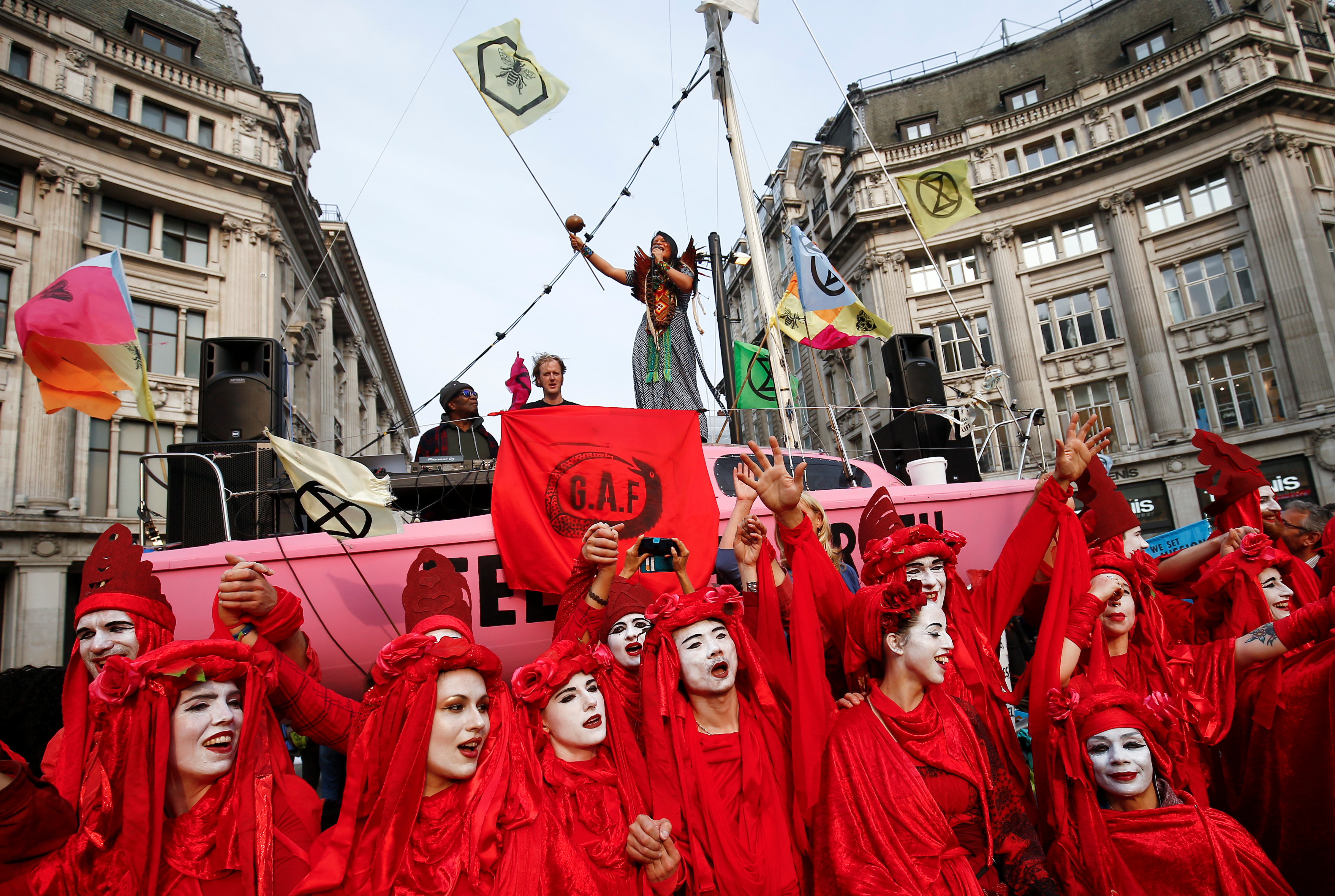 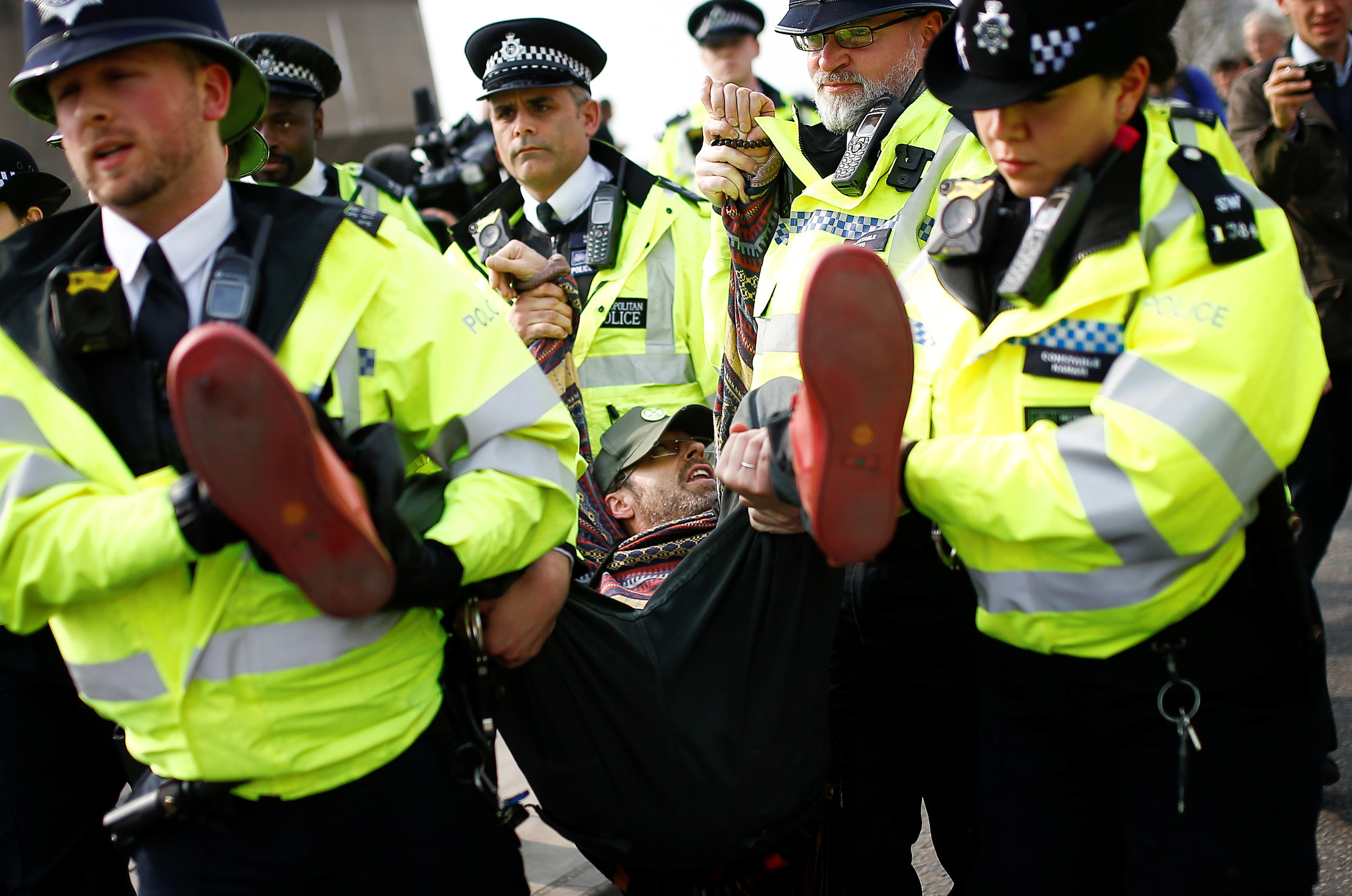 Protesters blocked roads and bridges, disrupting commutes for many Londoners just trying to get on with their day. Actress Emma Thompson joined protesters Friday, though she only did so by flying thousands from Los Angeles.

“I can’t describe the level of hypocrisy from our government.”

Actress Emma Thompson says she’s standing with the “next generation who want to fix the problem”. #ExtinctionRebellion protests are taking place in London demanding action on climate change: https://t.co/ymQcqoxyh8 pic.twitter.com/GrcKdz1RQp

A small group of protesters showed up to Heathrow Friday after activists threatened to disrupt air travel over the Easter holiday weekend. London Mayor Sadiq Khan warned protesters against disrupting traffic at Heathrow.

“It is being reported that climate protestors are planning to disrupt Heathrow Airport tomorrow,”  Khan tweeted Thursday. “This is extremely dangerous, illegal and is putting an unacceptable toll on our police force and our city.”

UPDATE: It is being reported that climate protestors are planning to disrupt Heathrow Airport tomorrow. This is extremely dangerous, illegal and is putting an unacceptable toll on our police force and our city.

Throughout the week, Londoners have complained about longer commutes because of blocked bridges and roads. Some residents also complained of litter left behind by protesters.

My wife works near where Extinction Rebellion had one of their main protests and picnics yesterday. So much litter was left behind. Is this part of the protest in some way?

Protests are expected to continue. Swedish teenage activist Greta Thunberg said she wants to join protesters on her visit to London next week. Thunberg is credited with inspiring mass climate protests across Europe and the U.S., demanding governments do more to cut emissions.