“There is no tax evasion,” Cohen told Arnold in the phone call, according to The Wall Street Journal.

“Look at what’s happening to Avenatti — it’s called karma boomerang,” Cohen also said in the call, which Arnold recorded March 25, without Cohen’s knowledge. “The guy lied about me every single day, right? And the world loved it.” 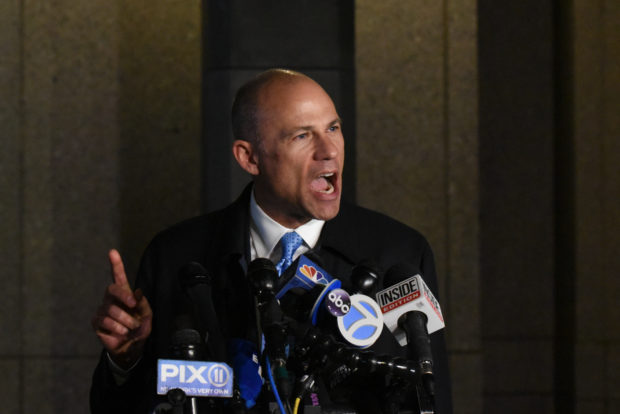 Michael Avenatti, the former lawyer for adult film actress Stormy Daniels’ and a fierce critic of President Donald Trump, speaks to the media after being arrested for allegedly trying to extort Nike for $15-$25 million on March 25, 2019 in New York City. (Photo by Stephanie Keith/Getty Images)

He was sentenced to three years in prison Dec. 12, 2018, and will begin serving the sentence May 6.

Arnold’s recording turns the tables on Cohen, who is known for making secret recordings of phone conversations with reporters, colleagues and his former boss. The comedian provided the 36-minute recording to the Journal.

In the call with Arnold, Cohen complained he felt like “a man all alone” in the wake of his legal troubles.

“You would think that you would have folks, you know, stepping up and saying, ‘You know what, this guy’s lost everything,'” he said, according to the Journal.

He also said “it’s a lie” that he committed bank fraud in applications for loans against his home.

Cohen said one reason he took a plea deal was that prosecutors were going after his wife. He also said he expected to receive a lighter sentence that the three-year term he originally got.

“I love this woman, and I am not going to let her get dragged into the mud of this crap,” Cohen said of his wife. “And I never thought the judge was going to throw a three-year fricking sentence.”

Cohen deposited $2.4 million from his tax schemes into his wife’s bank account.

Avenatti faces even more serious charges than Cohen. He was indicted in New York on charges that he tried to extort Nike, Inc. for $20 million. He is accused in California of extorting at least five clients out of millions of dollars by withholding proceeds from their legal settlements.