A veterans activist with the Vietnam Veterans of America, Kristofer Goldsmith, described in a previously unreported 2008 video committing acts that an expert said could be a war crime that could carry a punishment of death or life in prison.

Goldsmith said in the video that, as a soldier, he sabotaged Iraqi allies’ rifles while they slept so that they were rendered defenseless. He said he spread the idea to platoon members who joined in, disabling the rifles of an entire Iraqi company fighting on the same side as the U.S.

Goldsmith is now the associate director for policy and government affairs at VVA, a congressionally chartered group that was involved in a town hall with Rep. Alexandria Ocasio-Cortez on April 17. The New York Democrat said of the Department of Veterans Affairs, “If it ain’t broke, don’t fix it” — a position on the VA at odds with the majority of veterans groups.

Goldsmith is married to the editor of The New York Times’ At War blog, Lauren Katzenberg. He has testified before Congress and has done research into internet hoaxes that has spurred a congressional investigation. Numerous major news outlets, including CNN, The New York Times and The Wall Street Journal have featured Goldsmith.

Goldsmith now says his claim that he sabotaged Iraqi troops’ rifles was fake.

“Yeah, so there was a time when I was an anti-war activist,” he told The Daily Caller News Foundation. “No, it is not true … I wish that stupid shit would go away.”

Kristofer Goldsmith is pictured in 2008. (Screenshot/YouTube)

He said the FBI’s recently disbanded war crimes division investigated his confession since the Army did not have jurisdiction because he was out of the service. He told TheDCNF that the bureau interviewed some of his platoon members and found no evidence his claim was true.

Shortly after the phone conversation, Goldsmith tweeted a somewhat different version of the story.

“In the video I talk about disassembling my Iraqi counterparts’ firearms to spite them when I was deployed in ’05,” he wrote. “I believed I did this. A few years ago, Army Criminal Investigation Command investigated these allegations and couldn’t validate them. They told me I imagined it.”

Retired Lt. Col. J.W. Kastl, a former military lawyer, said if Goldsmith did commit the acts in the video, it “could be attempted murder or manslaughter. … It’s a prosecutor’s dream in terms of how you charge it.”

“It seems extraordinary,” he said, noting that Goldsmith’s claimed acts could amount to war crimes. “That could call for maximum punishments,” meaning a sentence to death or life in prison. “Whatever you think of the Iraqis, they were our allies, and that might turn the stomachs of people who might be on the military jury on a court martial.”

In the video, Goldsmith said the following:

These Iraqi soldiers who fall asleep … I was infuriated. And my way of teaching them a lesson was to disassemble their AK-47 while they slept. I would take out the bolt from their weapon and I would throw it off the roof. I would then reassemble their weapon and put it back where it was. When they would wake up, they would grab their weapon not knowing the difference. They would go back on patrol on the streets of Iraq for hours a day in unarmored trucks. The Iraqi soldiers’ only defense was aggressive fire. I removed that ability.

When I went to my friends feeling a little guilty for what I’d done, they thought it was a great idea. So we all did it. My entire platoon disassembled every single AK-47 for an entire company of Iraqis and we sent them back out on patrol with no way to defend themselves in unarmored vehicles.

This is what my country has done to me. This is the guilt that I live with for the rest of my life. This is what my brothers and sisters have experienced. We are not born monsters, monsters are created.

The video of Goldsmith’s so-called “Winter Soldier” testimony was recorded in Denver and uploaded to YouTube in August 2008. He was then with the group Iraq Veterans Against the War (IVAW).

“No amount of therapy will ever change the fact that I may have killed men that I don’t even know,” he said. He blamed the Bush administration for his self-proclaimed atrocities.

‘The only people who welcomed me home’

Goldsmith told TheDCNF he was deployed for one year in 2005 and then received a less-than-honorable discharge after attempting suicide and deliberately missing his flight to a second tour of Iraq. He attracted media coverage by telling Congress of “lawless murders, looting and the abuse of countless Iraqis.”

He found that liberal activists who wanted to end the Iraq War were eager to have a soldier’s negative experience they could cite. “Hence my reason for associating with people who were the only people who welcomed me home,” he told TheDCNF.

In May 2008, Goldsmith testified before the House Progressive Caucus that Army recruiters had not pressured him to join, but rather he sought it out and had a pre-existing desire to commit atrocities.

“I joined the army to kill people. To kill Iraqis, to kill Muslims,” he said. “I remember … standing up the day after 9/11 and talking about how we should use chemical weapons or biological weapons over the entire Middle East to make it so the religious land, the Holy Land, is not an issue that harms Americans.”

“I want to state that I have since changed, I am no longer a racist, I am no longer filled with hatred like that,” he continued. “I blame the people of America and their apathy” for not ending the war because “they have not done a good enough job to convince the rest of your peers, mainly Republicans, to fight to bring our troops home.” 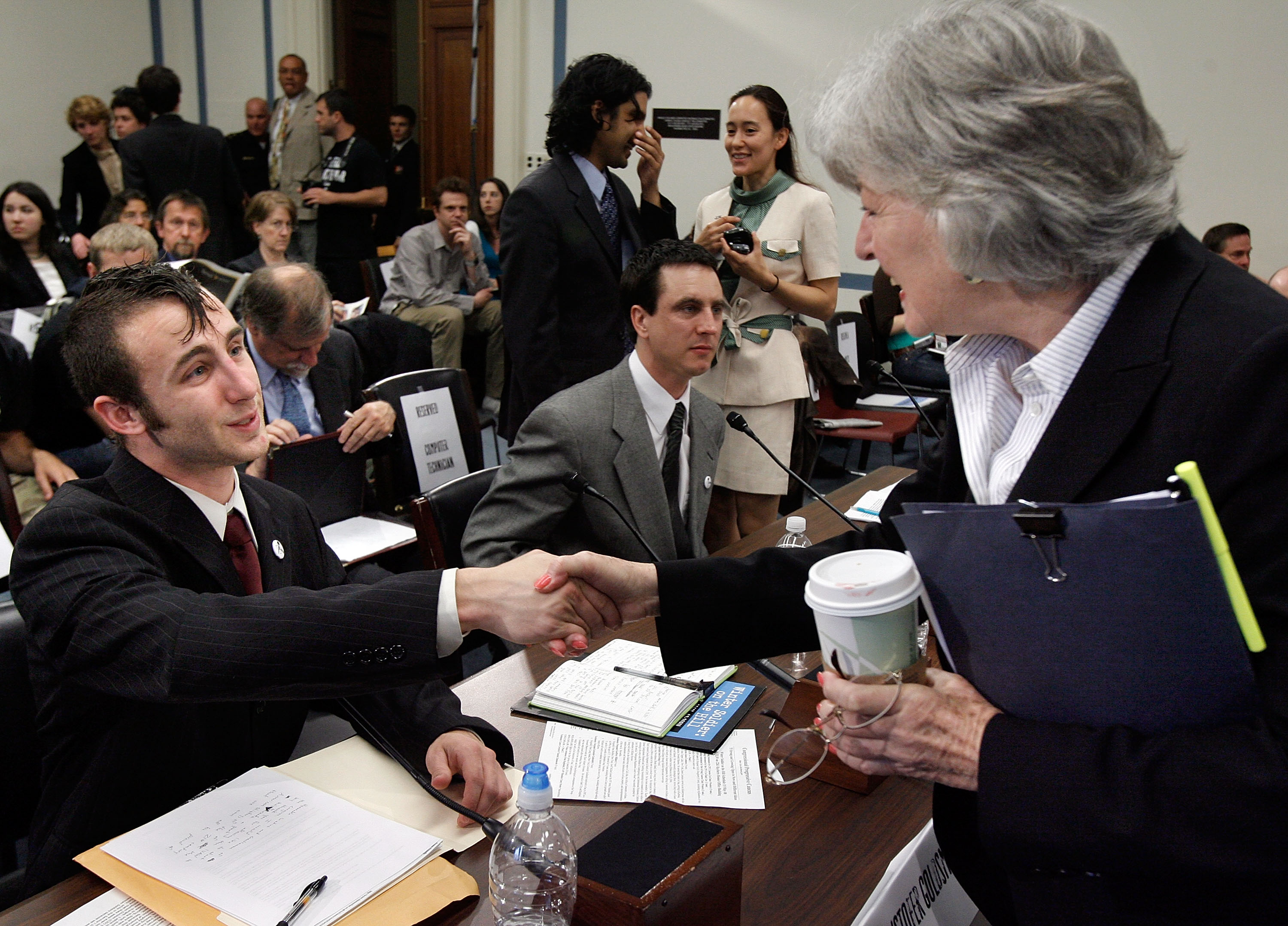 Goldsmith quit IVAW in 2009, saying others in the group were telling lies about their experience in Iraq, inflating their combat experience and advocating for criminal sabotage in the military theater.

TheDCNF asked Goldsmith why he quit that group over made-up stories considering his claim that his own story of wartime atrocities was made up. Citing his post-traumatic stress disorder, he said: “I can’t say I wasn’t still fucked up.”

Goldsmith told Congress he served during a ceasefire and his unit wasn’t authorized to use artillery. “The violence was very low due to the cease fire. … My primary mission was humanitarian aid,” he said. “My platoon would be assigned to escort pump trucks such as these to clear the streets … sucking up a puddle of sewage.”

In recent years, Goldsmith has refashioned himself into an official for Vietnam Veterans of America, a nonpartisan group representing veterans of that era, who tend to be conservative.

Just after the November 2016 election, he posted online a picture of himself with Hillary Clinton and wrote that he was “disgusted” and “enraged”: “It’s no secret that I was a vocal supporter of Hillary Clinton throughout this race, despite the complications that it could potentially cause in my work in Washington. I felt what was at stake was worth it, and I have no regrets.”

VVA is congressionally chartered, which means Congress authorized its mission. Congress frequently looks to it and other Veterans Service Organizations to represent the interests of veterans and help shape policy. However, the D.C.- and New York-based class of professional government relations men who run the groups do not always relay the opinions of the thousands of veterans who make up their membership to Capitol Hill. (RELATED: American Legion Downplays Death of Vet Waiting For Care, Calling Him A Mooch)

In 2016, the American Legion conducted a survey of its member, who said they overwhelmingly wanted the option of choosing private doctors instead of VA doctors — a plan pushed by Republicans. The top brass of the Legion went against the survey anyway and, joining with VVA, wrote a letter saying their national executive boards did not favor the policy.

“Our veterans served in uniform to guard against threats to our democracy just like those posed by these internet bots and trolls intent on sowing division and spreading misinformation,” the California Democrat said.

On Twitter, many of Goldsmith’s missives oppose President Donald Trump, with frequent talk about the Mueller investigation.

“I separate my personal politics from my work,” Goldsmith told TheDCNF. “When I put on a suit and go to Congress, I’m working for VVA. When I’m sitting drinking a beer and tweeting, I’m not acting on behalf of VVA.”

He declined to characterize the politics of other top VVA officials.

Goldsmith is also the co-founder of High Ground Veteran Advocacy. He co-founded it with Alexander McCoy, who held a “veterans against Trump” protest and “went to great lengths to hide the Clinton campaign’s involvement with organizing the demonstration,” the Daily Beast reported.

But Goldsmith told TheDCNF that the government has in fact footed much of the bill for his ongoing Columbia University education, though it didn’t give him additional cash on top of tuition like other veterans would get.

“I’m using [vocational rehabilitation] for people with a general discharge. If you’re disabled like with PTSD, you’ll qualify for voc rehab but it won’t pay for cost of living,” he said.

On April 19, he described how he has used the opportunity to write a 20-page paper on “the study of dicks in sculptures,” such as one in which “16 children all have dicks out.”