“Let’s stop dignifying it as a cartoon. Like you said, it is propaganda. It wouldn’t surprise me if this was published out of Tehran or Damascus, but it does not belong in The New York Times or any credible media outlet. As we were talking about earlier, there was a shooting this weekend,” Greenblatt stated during a discussion with Kate Bolduan and Brian Stelter. “The second in six months at a synagogue, and the shooter in his manifesto talked about myths of Jewish control and Jewish manipulation, and then they print this propaganda that literally exhibits stereotypes that suggest Jewish control and Jewish propaganda.”

He continued, “Look, sometimes anti-Semitism is overt. Like white men screaming in Charlottesville, Jews will not replace us. Sometimes it’s thinly veiled like this in the pages of The New York Times. But it’s unacceptable anywhere.” 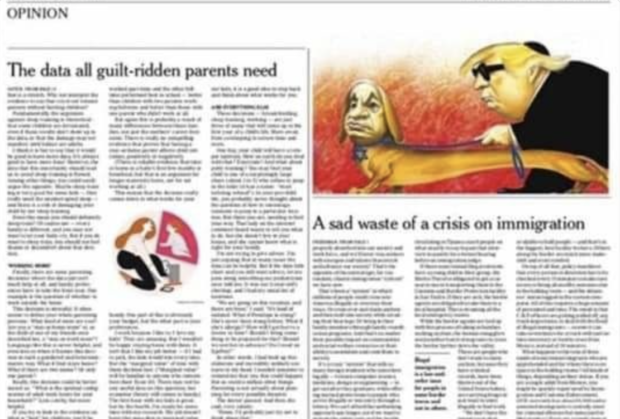 The cartoon, which appeared in Thursday’s paper, featured Israeli Prime Minister Benjamin Netanyahu as a dog with a Star of David collar leading a blind Trump, who is wearing a yarmulke. There was no caption or text alongside the caricature.

“A political cartoon in the International print edition of The New York Times on Thursday included anti-Semitic tropes, depicting the prime minister of Israel as a guide dog with a Star of David collar leading the president of the United States, shown wearing a skullcap,” The New York Times Opinion Twitter account tweeted Saturday morning. “The image was offensive, and it was an error of judgement to publish it. It was provided by The New York Times News Service and Syndicate, which has since deleted it.”

We apologize for the anti-Semitic cartoon we published. Here’s our statement. pic.twitter.com/nifZahutpO

They then issued a follow-up statement on Sunday, in which they explicitly apologized. Since then, The NYT published another cartoon of Netanyahu. This one depicts a blind Netanyahu holding a tombstone that has an Israeli flag drawn on it. (RELATED: One Dead, Several Injured In Shooting At San Diego Synagogue)

Wait…the ⁦@nytimes⁩ featured ANOTHER Netanyahu cartoon? This one AFTER the Thursday cartoon depicting Netanyahu as a dog? Am I reading this right? Is the Times obsessed with Israel’s prime minister? pic.twitter.com/r1KsSaYWtw

Greenblatt brought up the more recent NYT cartoon later on the network, saying:

We actually now need accountability and action. An apology is not enough. Just today, in the international edition of The New York Times, there is another cartoon depicting Benjamin Netanyahu in sunglasses, that while maybe not obviously anti-Semitic is insensitive, is unnecessary, and is offensive two days after the murder of Lori Kaye in San Diego county. This is enough. Like, I don’t understand why we are still dealing with this at The New York Times. At the number-one newspaper in this country and the one that shapes public opinion around the world. Like, if they are publishing this screed, why should they be surprised when people are then committing violence against Jews?

The backlash surrounding The Times’ cartoon coincided with a terror attack that left one person dead when a man opened fire inside a synagogue in California on Saturday.