Congress heard from a panel of witnesses including a 35-year-old activist with ALS at the first-ever Medicare for all hearing Tuesday.

Activist Ady Barkan’s blunt words to the House Rules Committee called for a Medicare for all proposal like the bill that roughly 100 House Democrats signed onto in February. Barkan has lost the ability to speak and answered representatives’ questions with a synthetic voice connected to a computer program operated by his eyes.

His words highlighted a growing rift in the Democratic Party as House Speaker Nancy Pelosi focuses on tuning up the Affordable Care Act rather than jumping on the Medicare for all train with progressives like Democratic New York Rep. Alexandria Ocasio-Cortez. 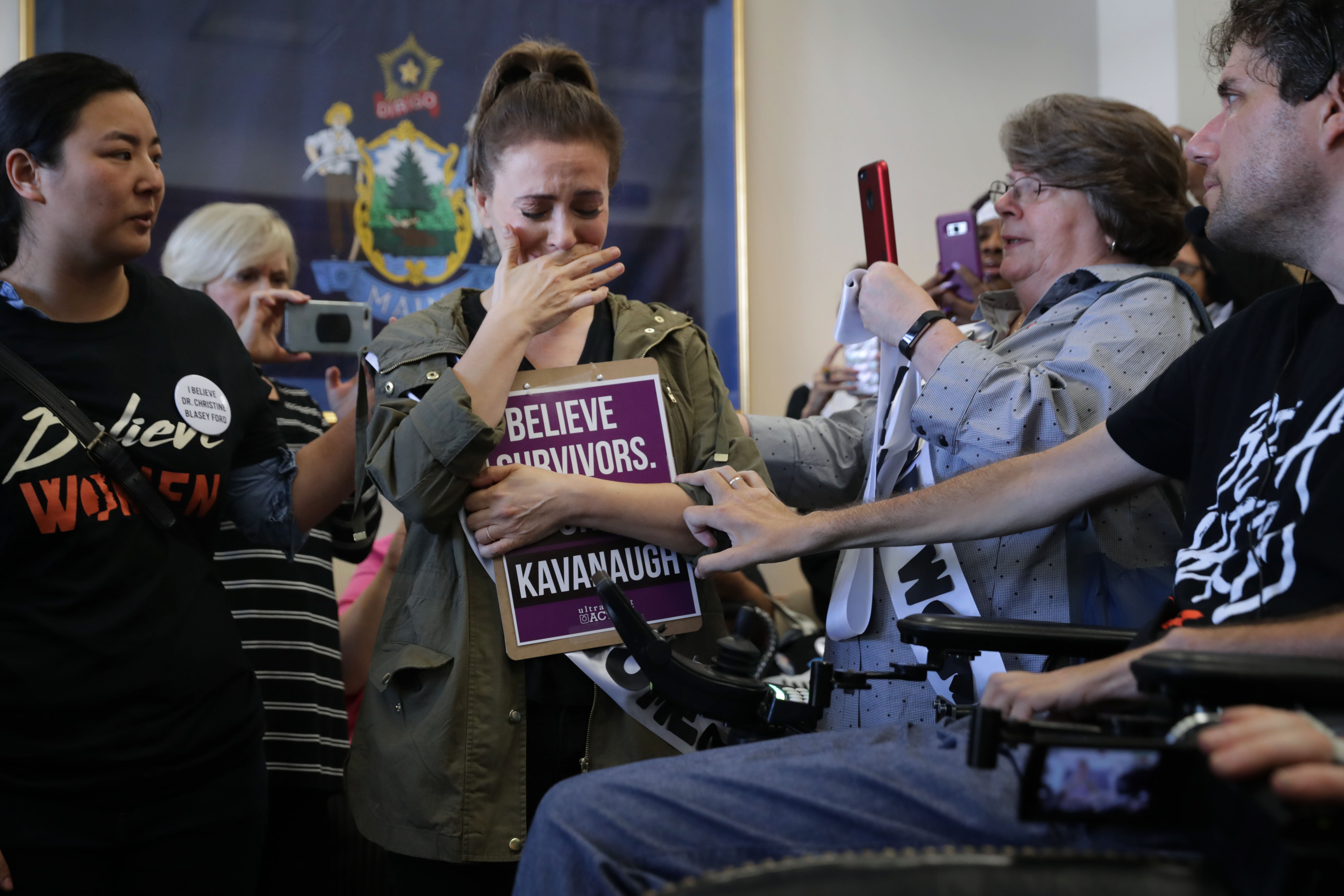 Actress Alyssa Milano is comforted by Ady Barkan (far right) after telling her story of being sexually assaulted while she and dozens of other protesters demonstrate against the appointment of Supreme Court nominee Judge Brett Kavanaugh in the office of Sen. Susan Collins in the Dirksen Senate Office Building on Capitol Hill September 26, 2018 in Washington, DC. (Photo by Chip Somodevilla/Getty Images)

On the pro-Medicare for all side, Barkan was joined by another witness, New York emergency room physician Dr. Farzon Nahvi. Charles Blahous, author of a study estimating the cost of Vermont Independent Sen. Bernie Sanders’ Medicare for all plan, and Grace Marie Turner, of the free-market-oriented Galen Institute, spoke about the plan’s potential drawbacks.

Committee chair and Massachusetts Democratic Rep. Jim McGovern touted Medicare for all as “a better way to go forward” during the hearing. McGovern also claimed that seniors would see more benefits under Medicare for all rather than status quo Medicare. Opponents of Medicare for all have told seniors that the proposal would put them “in the back of the line to wait for health care,” as Centers for Medicare and Medicaid Services Administrator Seema Verma told Yahoo! Finance this week.

Barkan hit back after Turner called the employer-based health insurance model a “central pillar in our health sector.”

“We don’t expect employers to provide workers with education for children or fire insurance. There’s no reason to tie health care to employment. It just exacerbates the negative impact of job loss,” Barkan said.

He had already shared about how his ALS diagnosis at age 32 turned his life upside down. The diagnosis forced Barkan to learn how to fight back against health insurance companies he said denied paying for round-the-clock care, life-saving medicine and a breathing machine.

Many Americans have a positive reaction to the idea of Medicare for all, but their support plummets when they learn of its tradeoffs, Turner pointed out. A January poll by the Kaiser Family Foundation said 56 percent of Americans initially support Medicare for all. That support drops to 37 percent when individuals are told the plan would mean higher taxes, reported the Associated Press.

“People are hurting, and they feel powerless as cogs in the $3.6 trillion health care system,” Turner said. “It’s hard to see how consumers would be more empowered dealing with a single government payer in a country that values diversity.” 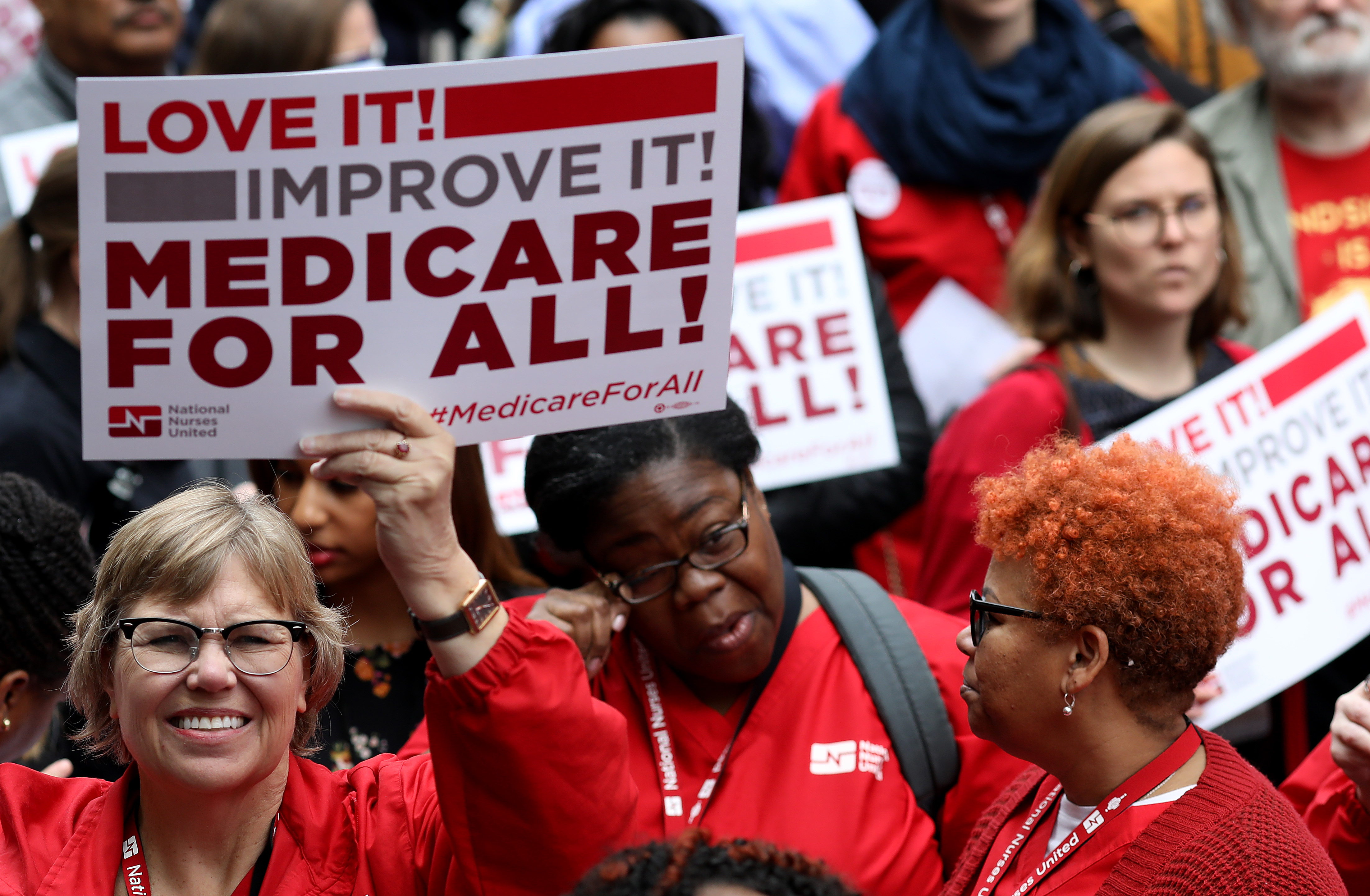 Protesters supporting “Medicare for All” hold a rally outside PhRMA headquarters April 29, 2019 in Washington, DC. (Photo by Win McNamee/Getty Images)

She also highlighted the 2014 failure of Vermont to implement the single-payer health care system it approved after Democratic Vermont Gov. Peter Shumlin, who backed the change, said it would cost too much and “might hurt our economy.”

There are currently two Medicare for all proposals introduced in Congress: a Senate proposal linked to Sanders and a House proposal introduced by Democratic Reps. Pramila Jayapal of Washington and Debbie Dingell of Michigan.

The House plan would apply Medicare-like coverage to all U.S. citizens within two years of its passage, according to the Washington Examiner. The plan would be more extensive than Medicare in its coverage of mental health, addiction treatment, dental care and more.

The bill would also cover abortion and reverse the Hyde amendment, which bars the use of federal funds to pay for abortion under most circumstances, according to National Review.