I know it’s hype, because I do speak seven languages (English, French, Hebrew, German, Italian, Russian, and Spanish — in that order), and the online evidence of his vaunted multilingualism sometimes seems little more than a parlor trick.

To be fair, Buttigieg has never claimed outright, “I speak seven languages.” He has cautioned that his Arabic and Dari are “pretty rusty” and that he can read Norwegian “only slowly.” But neither has he discouraged the buzz. When Ellen DeGeneres asked him “You speak seven languages; what are they?” he said he wasn’t claiming to be fluent in most of them — but he listed them anyway: French, Spanish, Norwegian, Arabic, and Italian. (He also claims to speak Maltese and Dari.)

Yet in the language community it’s no trivial claim to say you “speak” a language. “I speak Maltese but I’m not fluent” is an unclear, if not incoherent, statement.

Speaking of incoherent, that’s a good word to describe Buttigieg’s Italian. One of the few clips online of “Mayor Pete” actually speaking foreign languages suggests he should scratch Italian off his list. He makes at least four mistakes in 12 seconds, and finishes with “Sorry, I’m out of Italian.” (RELATED: Pete Buttigieg Supports Pathway To Citizenship For Millions Of Illegal Immigrants)

That’s part of his schtick with languages he doesn’t know well, as seen in another much-circulated clip: “Sorry, I just ran out of Norwegian.” Buttigieg presents himself as an aw-shucks Indiana whiz kid who dabbles in languages and shrugs after showing off, no matter how many errors he makes.

Which, in Norwegian, is quite a few. Professor Stine Johansen of the University of Oslo said his skills were “quite basic” and told me her students “speak better than him after the first week of Norwegian classes.”

So what does it mean to “speak” a language?

One expert on that question is Gabriel Wyner, who runs fluent-forever.com. On the European six-level scale (starting with beginner A1 and going A2, B1, B2, and C1, through native-level C2) many learners consider A2 to be the level where a learner can say he “speaks” the language; but Wyner pegs B1 as a “decent marker” below which he won’t say he speaks a language. (Even by that standard, he speaks at least eight.)

Under the European framework, a B1 speaker can “deal with most situations likely to arise when traveling in an area where the language is spoken.”

For Buttigieg, that seems unlikely for seven languages. He has a problem with gender — not knowing that “country” is masculine in Spanish; the adverb “a lot” has a masculine ending in Italian; and “pain/suffering” is feminine in French. The latter is forgivable — but anyone who uses the wrong gender for very common words will stick out as a weak speaker.

And most language programs teach learners early how to talk about their facility. In admitting his lapsed Italian, Buttigieg says “dimenticato molta” instead of “ho dimenticato molto.” That’s like saying “I forgetted lots.” Sorry, but he doesn’t speak Italian. 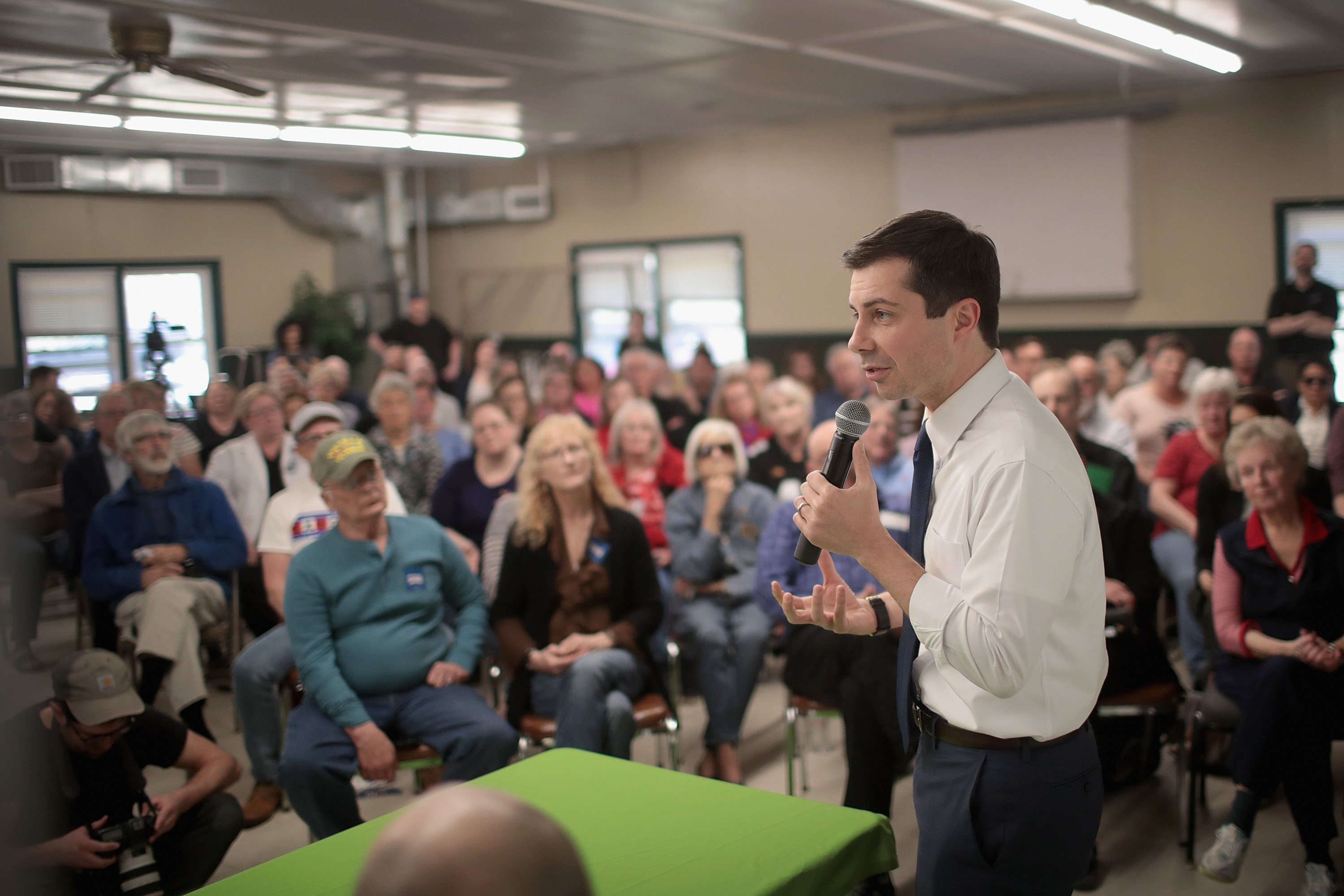 FORT DODGE, IOWA – APRIL 14: Democratic presidential candidate and South Bend, Indiana Mayor Pete Buttigieg hosts a town hall meeting at the Lions Den on April 16, 2019 in Fort Dodge, Iowa. This was Buttigieg’s first visit to the state since announcing that he was officially seeking the Democratic nomination during a rally in South Bend on Sunday. (Photo by Scott Olson/Getty Images)

His only public demonstrations of Maltese, Dari, and Arabic are gimmicks like greeting America “Good Morning” in seven languages on Good Morning America — a performance anyone could pull off with a little practice. Similarly, he had a clearly scripted, too-cute trilingual exchange with Jimmy Fallon in a spot for The Tonight Show. The candidate seems to categorize his purported multilingualism alongside “Harvard” and “concert pianist” whenever he brags he’s smarter than Trump.

But a president’s language skills are more important than his alma mater and favorite instrument. A Commander in Chief who speaks to world leaders in their own languages would help our diplomacy, undermining the Ugly American stereotype.

He won’t acknowledge the extent of his linguistic yarns, though, lest he lose the PR value of a baby-faced septilingual president-in-waiting. (RELATED: Tucker On Buttigieg: Whining Is Power)

I discussed the matter with one of the nation’s experts — Dr. Dianna L. Murphy, who directs the Language Institute at the University of Wisconsin-Madison. She pointed out that people can have a variety of language strengths and weaknesses; and rather than treating language competency as a “switch yes or no,” learners can tell more of a story about their abilities.

For example: “I can comfortably negotiate with the French prime minister in French, but if I go to a summit in Italy at most I can order a pizza. And I admit my slow reading ability in Norwegian won’t be much of an asset.”

Now, in some cultures, a foreigner who can say two words astounds native speakers (I’m thinking of you, China), while other countries (excusez-moi, France) have much higher expectations. So if, for example, President “Seven-Language” Pete hits the road and talks to Italians about “i tutto il perspectivo europeo” (his mangling of “tutte le prospettive europee”) the pitch may fall flat.

It’s no marginal skill for a president, so if multilingual Pete Buttigieg can help the country, I say let him brag. Well, only about languages he actually speaks.