A San Francisco high school is considering getting rid of a series of murals commemorating former President George Washington because a working group concluded they are traumatizing the students and local community.

One of the murals depicts Washington as a slave owner, while another shows him advocating for westward expansion next to a dead Native American, The Richmond District Blog reported. The paintings have been in the halls of the George Washington High School since it was established in 1936.

The San Francisco school district commissioned a working group to review the murals in 2018, after a heritage group proposed the school be designated a historical landmark in order to protect the murals and other historic art around the school. The group concluded the mural “traumatizes students and community members,” and recommended all of the ones related to Washington be “archived” and removed. (RELATED: Charlottesville Votes To Remove ‘Stonewall’ Jackson Statue From Park)

“We come to these recommendations due to the continued historical and current trauma of Native Americans and African Americans with these depictions in the mural that glorifies slavery, genocide, colonization, manifest destiny, white supremacy, oppression, etc.,” the group wrote in its recommendation. 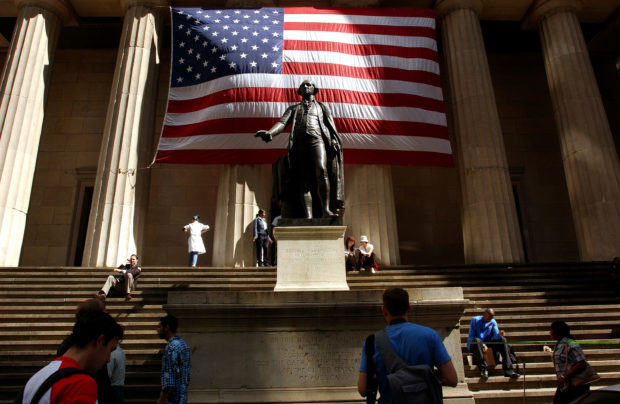 The murals are painted directly onto the school walls, so removing them would mean painting them over. An industrious Russian-American painter named Victor Arnautoff worked to complete the murals for 10 months, according to The Richmond District Blog. The process was tricky because of the method he used to paint the murals before the building’s wet plaster dried. (RELATED: Washington & Lee University Replaces Portraits Of Washington And Lee)

“Mr. Arnautoff had to follow right behind the plasterers, and a scene, once begun, had to be completed that same day, in order that the walls did not dry,” reads a description of his work on a site about the school. “Carpenters and plasterers worked all around the building, while Mr. Arnautoff was above on a scaffold.”

Historian Fergus Bordewich pointed out in The Wall Street Journal that Arnautoff was a communist, and argues the murals were not intended to glorify Washington at all, but to “provoke a nuanced evaluation of his legacy.”

Other advocates for the mural argue getting rid of it would be an inappropriate destruction of history. “I’ve talked to a bunch of students here and I honestly think that they agree it is the true depiction of history and that we all have to know who George Washington really was,” a student told the Golden Gate Express.

The school district will hold a public hearing and then vote on the matter, but the dates have not yet been announced.